The True Consequences of Chernobyl (Guest Article by Alison Katz)

This guest post is in commemoration of the 25th anniversary of the Chernobyl catastrophe. 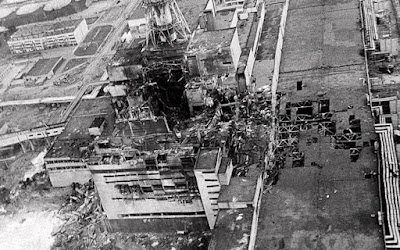 Alison Katz is a member of Independent WHO: The organization was created to demand a revision of the “WHA 12-40” agreement signed between WHO and the IAEA. Every working day since 26 April 2007, this organization has maintained a vigil across from WHO Headquarters in Geneva to demand the independence of WHO and expose the truth about the effects of radioactive contamination caused by the activities of the civil and military nuclear industry.

Here is her article:

For the past 25 years, the international community has been maintaining lies about the health consequences of the Chernobyl catastrophe. Through the IAEA (International Atomic Energy Agency) which was created by the United Nations to "accelerate and increase the promotion of nuclear energy” worldwide, it acts as a nuclear lobby.

The World Health Organization (WHO), the UN agency which is looked up to by the world’s populations regarding health issues, has been a party to the IAEA since the 28 May 1959 agreement (WHA 12-40) which united WHO and the IAEA and prevented them from taking a public stand on these issues.


In 2005, WHO co-signed an international press communiqué with the IAEA which declared a final casualty count for the Chernobyl catastrophe: a total of less than 50 deaths and a potential 4,000 deaths over the long-term.

In December 2009, the New York Academy of Sciences published the most complete and truthful collection of scientific data existing to date concerning the health and environmental damage of this catastrophe (Chernobyl: Consequences of the Catastrophe for People and Nature). The authors estimate that the radioactive emissions from the reactor which caught fire represent 200 times the fallout from the atomic bombs dropped on Hiroshima and Nagasaki. Also, that the number of deaths worldwide attributed to the fallout from the accident, between 1986 and 2004, is 985,000, including112,000 to 125,000 liquidators, out of a total of 830,000 who intervened.

Thousands of studies have established that there has been a significant increase in all types of cancer; respiratory, cardiovascular, gastro-intestinal, genital-urinary, endocrine, immune system, lymphatic and nervous system diseases; an increase in prenatal, perinatal and infant mortality, spontaneous abortions, malformations and genetic anomalies, perturbations and retardation of mental development, neuropsychological illnesses and blindness.

Concerning the Fukushima catastrophe which is just unfolding, the truth must be told about the health consequences of a nuclear disaster and it is up to WHO to take the initiative and coordinate all actions which would lead to the truth. However, for this, WHO would need to re-establish its independence.

If WHO were independent, the truth about Chernobyl would have been known, the world’s nuclear energy policy would have without doubt been modified and today, the tragedy of Fukushima could have been avoided.