Forum on the Genetic Effects of Ionizing Radiation (Geneva, 29 November 2014) 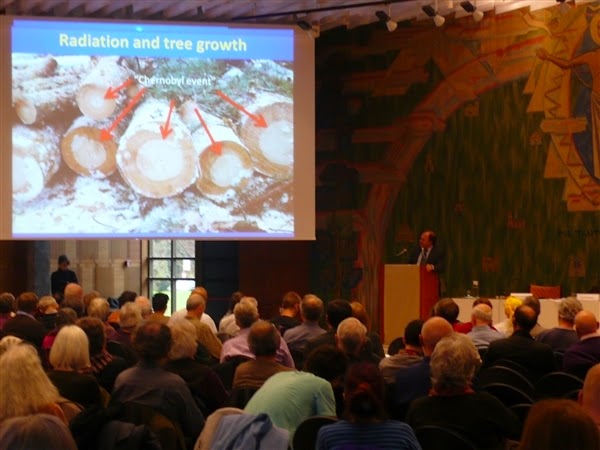 Forum on the Genetic Effects of Ionizing Radiation
IndependentWHO, 8 December 2014

On Saturday 29th November 2014 in Geneva, “Independent WHO – Health and Nuclear Power”organised, with the support of the City of Geneva, a “Scientific and Citizen Forum on the Genetic Effects of Ionising Radiation”. Six internationally renowned experts in the field (from Japan, the USA, Finland, England, and Germany) were invited to present their research. Ruth Stegassy, producer of the radio programme Terre à Terre on France Culture, chaired the event. More than 150 people attended this forum including a number of French and Swiss health professionals and journalists, as well as elected politicians, ecologists, members of health movements and associations, organisations concerned with food health, and anti-nuclear activists.

The forum was opened by Rémy Pagani, representing the City of Geneva, who gave the welcome speech. Then Inge Schmitz Feuerhake (Germany) introduced the subject with an explanation of the fundamental biological concepts of the genetic effects of ionising radiation. Yuri Dubrova (England) presented an overview of present and past research on the subject and described his own work on the transgenerational effects of parental exposure to mutagens. Wladimir Wertelecki (USA) presented the results of a decade of research in Ukraine, showing a significant correlation between rates of congenital malformation and levels of caesium-137 in pregnant women. Keith Baverstock (Finland) – well known for his denunciation of the effects of depleted uranium used in weapons – described the role and the potential consequences of genomic instability induced by environmental stress, including ionising radiation.Tim Mousseau (USA) presented studies showing significant effects of low dose ionising radiation, and also of natural background radiation, and underlined the fact that genetic effects on DNA are observed at all biological levels in ecosystems. The last speaker was Chiyo Nohara (Japan) who described studies showing the genetic effects that have already been observed in butterflies at Fukushima and who noted that these effects worsened in the second generation.

During the two hour discussion that followed, members of the audience had the opportunity to ask for clarification from the speakers, who were able to supply them with additional information. The six speakers were in agreement that the science of genetics was at a turning point requiring new theoretical models to enable a more detailed understanding of these phenomena. But through a lack of political will, insufficient funds are allocated to undertake a systematic study of this magnitude.

A representative of the collective IndependentWHO – Health and Nuclear Power brought the forum to a close, and commented that for over half a century, we have had sufficient knowledge about the genetic effects of ionising radiation to implement effective radioprotection measures. Moreover, if the international authorities had not abdicated their responsibilities, this forum on the genetic effects of ionising radiation would have been organised by the World Health Organisation in the years following the Chernobyl accident.

If the health consequences, and in particular the genetic effects of ionising radiation, had not been covered up by our national and international authorities, it is probable that today, nuclear energy would be used exclusively in the field of medicine.

Instead, the fact that the earth is immersed in more and more radiation, that many genetic effects, not previously recognised, have been observed since Chernobyl, and that the proof of these known effects has been confirmed, did not prevent the International Commission on Radiological Protection(ICRP) from reducing its estimates of the genetic risk by a factor of 6 in 2007…

Proceedings of the forum will be published on our website in a few months but meanwhile, the programme of events, a biography of the speakers and abstracts of their presentations can be read here, and the following photos provide a glimpse of the day’s events.