Changing Mix of Brain Tumors in U.K.: GBM Going Up, Other Malignant Glioma Going Down

RE-POSTED 14 MAY 2018:  We were already told in February 2017 that the incidence of the deadliest type of brain cancer, glioblastoma multiforme, was increasing in the United Kingdom.


GBM Going Up, Other Malignant Glioma Going Down

The incidence of glioblastoma multiforme (GBM), the most virulent and deadly type of brain cancer, is going up in the U.K., while the incidence there of other types of malignant brain tumors are declining, according to some newly published raw data.

Take a look at the two plots below and the trends are immediately apparent.

The incidence rates are not corrected for age, or any other factors. Better screening and diagnostics, the oft-cited explanations for an observed increase in a type of cancer, seems unlikely. Any such changes would probably affect all types of brain tumors. It is possible that the trends reflect the aging of the population, but that too seems doubtful since the likelihood of developing glioma increases with age once past the mid-teenage years. 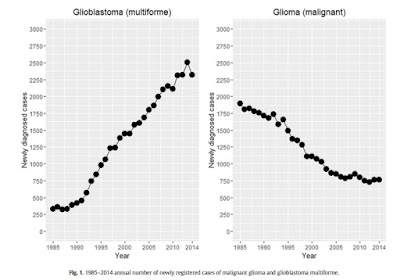 Source: Frank de Vocht, "Corrigendum," Environment International, posted January 25, 2017
(GBM is a type of glioma, so the right-hand plot would be better titled
“Malignant Glioma other than GBM”)

The new data come from a correction to a paper published last year by Frank de Vocht, a lecturer at Bristol University. That paper, an analysis of the possible impact of the use of mobile phones on brain tumor rates in the U.K., was based, in part, on “incorrect data,” prompting de Vocht to issue the “Corrigendum” with these two plots of brain tumor incidences.¹

De Vocht states that the correction had “no significant impact” on his conclusions. Yet, the two plots in the correction look very different from those with the same titles in the original paper.

We asked de Vocht to comment on the significance of the side-by-side plots. He demurred. “I don’t know enough about how mixes of different types of brain cancer subtypes/gliomas behave over time,” he told us. de Vocht encouraged us to talk to Alasdair Philips, the founder of Powerwatch who has been studying brain tumor rates in the U.K. and is preparing his own analysis for publication. Indeed, it was Philips who first spotted the error in de Vocht’s paper, which led to the correction.

Here’s what Philips told us: “The simple take-home message of the two plots is that the number of the most aggressive type of brain tumors [GBM] is going up and the other types of lower-grade malignant glioma are going down. If better diagnosis were responsible for the changes in GBM, then you would expect the two trends to be going in the same direction.”

“As GBM is almost always quickly fatal it is unlikely that they were misdiagnosed in the past,” Philips added. “It looks like something is causing or at least stimulating agressive glioma growth. Clearly, it is no longer enough to look only at overall brain tumor rates.”

While the new plots in themselves say nothing about any possible links between cell phones and brain tumors, they go a long way toward puncturing the argument offered by numerous public health officials and media outlets that such an association is highly unlikely because the overall incidence of brain tumors has remained relatively stable over the last number of years.

The same argument has also been used to discount the results of the NTP study, which shows that cell phone radiation increased cancer among rats. (See, for instance, this video from the New York Times.)

GBM has been rising in the U.S. as well as in other countries.

1. Here is the de Vocht’s conclusion from his original paper:
“A causal factor, of which mobile phone use (and possibly other wireless equipment) is in agreement with the hypothesized temporal association, is related to an increased risk of developing malignant neoplasms in the temporal lobe.”