Are You Hooked on Screens? Here’s Why You Can’t Look Away 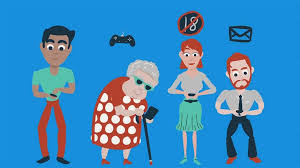 Interview with Adam Alter, author of "Irresistible" - the rise of addictive technology and the business of keeping us hooked.

Are You Hooked on Screens? Here’s Why You Can’t Look Away
by Lisa Tolin, nbcnews.com, 18 April 2017

If you're finding yourself spending more and more time staring at your phone, that's no accident.

In his new book "Irresistible: The Rise of Addictive Technology and the Business of Keeping Us Hooked," NYU marketing professor Adam Alter warns that internet addiction is on the rise — and that it's partly because addiction is good for business.

He presents some sobering statistics: The average millennial looks at his phone more than 150 times a day, and some studies suggest as much as 40 percent of the population suffers from some kind of Internet addiction, whether to gaming, pornography — or just email.

Alter spoke to NBC News BETTER about what your email habit has to do with gambling, trances and Biggie Smalls.

Yours may be the first book to make use of the phrase "never get high on your own supply," referring to people in the tech industry. What inspired that?

Adam Alter: I noticed that many tech titans promote their products publicly, but prevent their children from using those same products. Steve Jobs, for example, promoted the iPad by saying it was the best medium for communicating with other people, watching videos, and learning about the world—but when asked by a journalist for The New York Times if his kids loved the iPad, said "they've never used it; we don't allow it in our home." I discovered that many other tech giants send their kids to tech-free schools, which is an odd choice given how many schools make technology a central part of the learning process. All of this reminded me a bit of the "never get high on your own supply" idea—if you know how likely you and your loved ones are to suffer negative consequences from a drug (or piece of tech), you'll promote it and sell it publicly while making sure you regulate your family's use.

Would you say technology is designed to be addictive?

I don't think tech companies are explicitly trying to make their products addictive — at least that's not the term they'd use. I think they'd describe it as "maximizing engagement," or, to borrow a term from the gambling industry, maximizing "time on device." If you're competing for limited attentional resources, you need to make sure people can't stop using your product once they start. It isn't enough to just make a product that they buy and then ignore; they have to keep using it so you can attract advertising dollars and, in time, sell them sequels and encourage them to make ongoing purchases that are related to the experience. The consequence, though, is that these products are designed to be gripping, and often they turn out to be addictive.

What's the difference between checking the Internet all the time and, say, sitting for long stretches in front of a TV or even reading a book?

Sitting in front of the TV is a lot like checking the internet all the time. The big difference is that the TV — at least traditionally — had built-in "stopping rules." A stopping rule tells you when to move on to the next thing. When you watched a traditional TV show, each episode would end and you'd have to wait till the following week to watch the next one. You were forced to stop consuming. That's no longer the case with longform shows in which every episode is released simultaneously online — the Netflix model. It's even harder to stop watching now that Netflix has introduced post-play, which automatically plays the next episode in a series unless you actively stop the process. Bingeing is easier than ever. The internet is bottomless, too. It doesn't have stopping rules built in. Social media feeds are endless, emails never stop coming, and texts can appear at any time. In contrast, books contain stopping cues in the form of chapter, section, or paragraph breaks, which prompt you to consider closing the book. Books also demand attention from you, which is depleting. It's hard to read for hours and hours and hours (though we do it occasionally), and when you start to tire you stop paying attention to the book. TV and the internet demand very little from you; they put you in a trancelike state that you couldn't possibly be in if you were actively reading.

You point to a few factors that make people want to keep clicking. Is there one you think is particularly powerful?

The chance of being rewarded for each click or action — but not knowing if or when you'll get that reward. That same uncertainty drives people to gamble and buy lottery tickets. It's a big part of sharing content on social networks (how will people respond?) and checking your email hundreds of times a day (will I get an email that makes me feel good?).

You seem especially concerned about children. Are they particularly vulnerable?

Yes. They have fewer self-control resources than adults do, because they lack the kind of long-term thinking that comes with mental development. They don't yet know how to do something that's difficult now (reading instead of playing a game, for example) for greater benefit in the future. They also need to spend time in face-to-face interactions when they're young, because without trial-and-error periods, they can never learn what does and doesn't work socially. They need to experiment by, say, snatching another child's toy or bopping that child on the head. They'll learn from that other child's response that those aren't the kinds of behaviors that make for enriching social interactions.

What advice would you give to someone concerned about their use of technology?

Try to set aside at least some time every day when you put your screens in a drawer in another room. That time should be sacred — spent with loved ones or friends in face-to-face conversation, outside in natural environments, doing whatever you love in the offline world. We spend so much time in front of screens that the best first step is to actively avoid them for some of the day. At first it's hard to do—you spend the entire time thinking about what you're missing—but most people start to feel great after that withdrawal period passes. Many of them expand these tech sabbaticals to cover, say, one or both weekend days, which is evidence that they benefit from the process.

As a parent yourself, what kind of limits do you plan to set?

The American Association of Pediatrics recommends no screen time for kids under two. My son just turned one, and so far he hasn't been exposed to screens. We'll try to keep that up for as long as we can, but of course it becomes harder as he develops and his daycare friends are exposed to screens at home. Our basic approach is to follow these guidelines, but to treat them as guidelines rather than strict all-or-nothing rules. Being a parent is a challenge, and sometimes you might have to suspend those rules. (We recently flew with our son from Sydney to New York—a nearly 24-hour trip. He had an earache, and showing him a video on the seatback screen calmed him down briefly. Sometimes you have to give yourself a break!)