Bill Gates and Steve Jobs Restrictions on Wireless for Their Kids 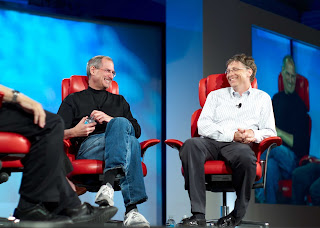 Bill Gates and Steve Jobs restrictions on wireless for their kids
by Dr. Igor Yakymenko, carelessscience.com,
13 May 2017

These two names are hardly associated with any restrictions on new technology. Right? Wrong. As it turned out, both technology geniuses strictly limited access of their kids to wireless devices (in case of Bill Gates at least till 14 for each of his three children). Indeed, recently the legendary founder of Microsoft revealed that he has banned his children from owning a smartphone before the age of 14 and forbids them for using gadgets at the dinner table [1]. “We don’t have cellphones at the table when we are having a meal, we didn’t give our kids cellphones until they were 14 and they complained other kids got them earlier,” says the father of three. “We often set a time after which there is no screen time and in their case that helps them get to sleep at a reasonable hour,” he added. His three kids Jennifer, 20, Rory, 17, and Phoebe, 14 are now old enough to own smartphones, but still have to follow house rules when they use them. “You’re always looking at how it can be used in a great way – homework and staying in touch with friends – and also where it has gotten to excess,” says the legendary innovators.

A similar rule was also used by not less legendary founder of Apple, Steve Jobs, who in a 2010 interview said his children hadn’t used the iPad because he limited how much technology his kids used at home [2].

Well, the million-dollar question is why did they do that (and still do in case of Bill Gates)? My first idea is logically about risks of microwave exposure for their kids. I admit this idea is in line with my professional interest and does not have any direct support in their interviews. But do you remember what smartphone and iPad have in common except of touchscreen? Exactly! They both are wireless and permanently emit microwaves around. And let’s see if it’s possible that these highly educated and informed CEOs could be not informed about risks from wireless radiation for children’s health. (See my recent post on the issue Cell phone and children: any risk?) I am pretty sure they just should be informed by their R&D people at least because it’s a part of risk assessment strategy for their high-tech businesses especially in case of Steve Jobs. By the way, it is known that Steve Jobs personally rejected to supporting a gadget that could indicate a level of microwave exposure from a particular iPhone in a real-time regime [3]. In his e-mail, he answered on the request – “No interest”. It’s a little bit strange answer for not informed person, is not it? But if he was informed his answer was in line with the industry strategy to draw as little attention as possible to the issue (unfortunately).

But let’s be realistic, it could be not a wireless radiation issue at all or at least not only that issue in such choice of Bill Gates and Steve Jobs. The access of sensitive child brain to practically uncontrolled online world through the wireless devices brings a lot more on the plate, starting from possible addiction of kids to social media and ending up with their free access to sex and porn content. As one mom said [4] those of us who grew up without phones have no idea what is like to go through your teenage years with social media. One girl explained it like this, “Imagine being able to see every single thing the guy you like is doing, all day long. Who he’s dating, where he is, what he’s saying.” And that mom reasonably continues, it is clear – we adults feel burdened by our unhealthy addiction to our phones. Well, imagine being 8, or 12, and having to try to master up the self-control! If we adults can hardly do it, how are children supposed to? That woman also cited critically important dialog with a teenager. The question was “What percentage of your friends do you think look at porn?” The kid said, “100%.” The next question was, “You realize what you just admitted, don’t you?” The kid held his phone up and said, “Man, I don’t have to go looking for any of that. It just finds me.”

So, it’s a lot on a plate indeed. And of course it’s not an easy decision to banning your child from a cell phone, say, till 14 as Bill Gates did while all other kids around have it. And you know, a lot of obvious advantages like permanent access/control of your kid just disappear in this case. Nevertheless we have an example of two fathers who obviously are/were not the stupidest guys in the world and who undoubtedly weighed very carefully the pros and cons of such decision. Just let’s keep it in mind. On the other hand, let’s keep in mind that according to one survey, presented at the American Academy of Pediatrics conference in April 2015, among American children younger than one year old, 36% have touched or scrolled a smartphone screen, and 52% watched TV on a wireless device [5]. So, here is a challenge for every parent couple – in which team you want to be: in the team of world high-tech leaders who care about their kids or in the other team with a war-cry “Give him/her that device only keep him/her quiet!”

1. Bill Gates didn’t allow his kids to have cell phones until they were 14. In: https://tribune.com.pk/story/1390767/bill-gates-didnt-allow-kids-cell-phones-14/
2. Steve Jobs Was a Low-Tech Parent. In: https://www.nytimes.com/2014/09/11/fashion/steve-jobs-apple-was-a-low-tech-parent.html
3. Steve Jobs personally rejects cellphone radiation level app emailing the makers: ‘No interest’. In: http://www.dailymail.co.uk/sciencetech/article-1369796/Steve-Jobs-personally-rejects-cellphone-radiation-level-app-emailing-makers-interest.html
4. Why Our Children Will Not Have Cell Phones. In: http://thehumbledhomemaker.com/2015/11/why-our-children-will-not-have-cell-phones
5. Look who’s swiping now: 6-month-old babies are using smartphones, study says. In: https://www.washingtonpost.com/news/morning-mix/wp/2015/04/27/look-whos-swiping-now-6-month-old-babies-are-using-smartphones-study-says/?utm_term=.4889a60a8833