Light at Night Damages Your Health and Potentially Future Generations 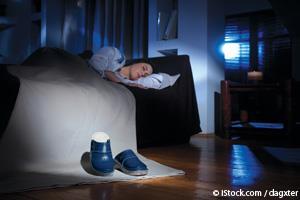 There is a significant cost to your health from light pollution resulting from living in a 24/7 society. A growing number of street lights and lit signs obscure the night sky, and your bedroom is likely dimly lit from street lamps, digital equipment or alarm clocks.

It’s not possible to “feel” the changes in your brain and body from outdoor street light that seeps in around your bedroom curtains or the dim glow from your alarm clock.

Yet, even a dim light at night affects your natural sleep cycle and produces biological changes which, in turn, may affect your risk for health conditions such as obesity, diabetes, cancer and depression.

I have been a long-time advocate of sleeping in complete darkness. Even a small amount of light is enough to make a difference in your health. And now, recent research demonstrates your exposure to light pollution may affect the health of your children.


Light Exposure at Night May Alter Immunity of Future Generations

In a study at Ohio State University, researchers concluded exposure to light at night may produce immune and endocrine disruptions.1To isolate the effect light has on sleep quality and not on interruption of sleep, they used naturally nocturnal hamsters that normally sleep during daylight hours.

Initially, the researchers noted an increase in body mass of both male and female hamsters exposed to dim light at night.2 The next generation was also raised under standard lighting conditions. The researchers ran a series of tests on the hamster pups once they achieved adulthood.3

They found parental history of light exposure prior to conception left the following generation of hamsters with an impaired immune response and decreased endocrine activity.

These health conditions were passed down through either parent’s genetic material, meaning it didn’t matter whether it was the mother or father that was exposed to dim light at night; the effect could be traced to either parent.

The impaired adaptive immune function noted in the hamster offspring illustrates a transgenerational effect of light at night.

While the exposure did not change the DNA sequence of the hamsters, it did affect the epigenetic expression of that DNA. Epigenetics describes changes to genetic expression not occurring from an actual sequence change in DNA, but rather how the genes are expressed.

For instance, exposure to environmental factors such as nicotine or alcohol may trigger sections of DNA to be switched on or off.

These changes in genetic expression can be passed to offspring while still maintaining the exact genetic sequencing. In this study, light exposure at night changed the epigenetics of the hamster offspring, negatively affecting their immune system.