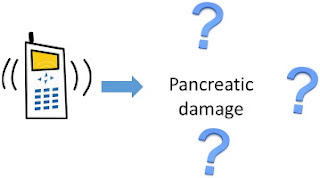 The aim of this study was to investigate the effects of electromagnetic radiation (EMR) on the pancreas tissue of young rats and the ameliorative effect of Gallic acid (GA). Six-week-old, 48 male rats were equally divided into four groups: Sham group, EMR group (2.45 GHz), EMR (2.45 GHz)+GA group (30 mg/kg/daily) orally and GA group (30 mg/kg/daily). After 30 days, serum and pancreatic tissue samples were harvested for biochemical, histopathological and immunohistochemical analysis. Serum amylase, lipase, glucose, and tissue malondialdehyde, total oxidant status and oxidative stress index were increased, whereas total antioxidant status decreased in the EMR group. The histopathological examination of the pancreases indicated slight degenerative changes in some pancreatic endocrine and exocrine cells and slight inflammatory cell infiltrations in the EMR group. At the immunohistochemical examination, marked increase was observed in calcitonin gene related protein and Prostaglandin E2 expressions in pancreatic cells in this group. There were no changes in interleukin-6 expirations. GA ameliorated biochemical and pathological findings in the EMR+GA group. These findings clearly demonstrate that EMR can cause degenerative changes in both endocrine and exocrine pancreas cells in rats during the developmental period and GA has an ameliorative effect.

Especially in developed countries, the use of Wi-Fi and radiation-emitting wireless devices has increased dramatically in the recent century (Kumar, Behari, & Sisodia, 2013; Naziroglu, Yuksel, Ozkaya & Kose, 2013). Reports of harmful effects of EMR from Wi-Fi, mobile phones and computers are increasing rapidly in the last few decades. Living organisms are continually exposed to radiation during their life. The deterministic effects of electromagnetic radiation (EMR) are related to the exposure time and dose. The level of damage on the cell structure might vary among cells and be based on their metabolic activity. EMR can cause detrimental effects on cell function and chromosomal aberrations in exposed tissues (Al-Damegh, 2012; Lai & Singh, 1997; Moussa, 2005; Ozorak et al., 2013; Tsurita, Uno, Tsuno, Nagawa, & Muto, 1999; Valberg, Kavet, & Rafferty, 1997).

Because of the large amount of mobile phone and computer users, investigating, understanding, and monitoring any potential public health impacts are important ( Naziroglu, Tokat, & Demirci, 2012; Turker et al., 2011 ). Another problem that causes EMR exposure is the decrease in the ozone layer, and this issue leads to an increase in the amount of dangerous ultra violet (UV) radiation that the Earth's surface ( Thiele, Dreher, Maibach, & Packer, 2003 ). Due to EMR that originates from reduced ozone layer thickness and technological devices, it is estimated that numerous diseases will increase in the near future because of UV radiation and EMR. ( Al-Damegh, 2012, Mayer, 1992, Moussa, 2005, Ozorak et al., 2013, Verma et al., 2011 ). Electromagnetic fields can alter the energy levels and spin orientation of electrons and increase the production of reactive oxygen species (ROS). Accordingly, exposure to EMR is associated with enhanced ROS production in cells and tissues ( Naziroglu et al., 2012; Turker et al., 2011 ).

Although the knowledge of EMR damage in the pancreas is newly reported, studies on this subject have increased rapidly. Sakurai et al. Reported that glucose-stimulated insulin secretion was decreased by EMR exposure ( Sakurai, Koyama, Komatsubara, Jin, & Miyakoshi, 2005 ). Turker (2015) showed that EMR can cause ultrastructural changes in endocrine cells in the pancreas. EMR has also been shown to increase the diabetogenic effect of alloxan in mice ( Garyae, Kokaya, Mukhina, Leonova-Garyaeva, & Kokaya, 2007 ). There is no knowledge on the effects of EMR on exocrine cells and the curability of the harmful effects of radiation. The purpose of this study was to investigate the effects of 2.
...
Discussion
...
The results of this study indicate that a possible interaction may occur in diabetes mellitus and exocrine pancreas disease caused by EMR in the developmental period. Diabetes and exocrine pancreas diseases have been increasing in the last few decades, parallel to the use of technological devices that produce EMR, and the diagnosis of pancreatic diseases has been increasing in young people. These results indicate that endocrine cells of the pancreas are more susceptible to EMR than exocrine cells. The rats that we used this study were young, and the marked increase in lesions may be related to this factor. Further studies are necessary to evaluate the effects of EMR on the pancreas at various ages. Specifically, EMR may be harmful in young animals. The powerful antioxidant GA has a protective effect of EMR-induced pancreatic lesions. This study suggests a possible relationship between EMR exposure at a young age and pancreatic diseases. This study has been published in the Journal of the American Medical Association.