Mobile-Signal Boosters a Health Threat, Yet FCC Takes Steps to Enhance Their Usefulness and Effectiveness 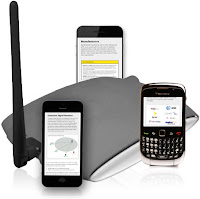 At its public meeting on 22 March 2018, the Federal Communications Commission took steps to provide increased flexibility in the use of consumer signal boosters and proposed additional actions to further enhance the usefulness and effectiveness of these boosters. Consumer signal boosters are devices that extend and improve wireless service without special engineering or professional installation. The boosters are designed to be used “out of the box” to improve wireless coverage within a limited area such as a home, boat, office, or recreational vehicle. The rules adopted eliminate the current personal use restriction on provider-specific boosters so that businesses, public safety entities, educational institutions, and other enterprise users and their customers can also benefit from the use of boosters. (See FCC press release.)

Here is what the Indian Medical Association says about signal boosters:
"According to Dr Ajay Purung of the Metro Group of hospitals in Noida, the radiation is particularly harmful for pregnant women. “Pregnant women should not spend time near in-house boosters as the radiation can cause abnormalities in the unborn baby.”

Have you installed mobile-signal boosters in your home for better cellphone reception? If yes, you and your family are being exposed to harmful radiation which can cause memory loss, headaches and even lower sperm count, the Indian Medical Association has warned.

There has been a tremendous increase in the sale of signal boosters with mobile phone towers being moved away from residential areas to, quite ironically, prevent excessive exposure to the radio frequency emissions from them.

The boosters are available across the national capital region for as little as Rs 2,000 with prices going up to Rs 20,000. In Noida alone, the market has grown to around Rs 100 crore, claims a trader.

“There are complaints of low mobile signals in all sectors of Noida. The sale of mobile-signal boosters has witnessed a three-fold increase in the last one year. Earlier we used to sell around five boosters per day. Now, it has gone up to more than 15 a day. The current annual signal booster market in Noida is worth around Rs 100 crore,” says Navneet Sharma, a supplier in Noida.

The Noida Authority had recently shifted several mobile towers away from residential areas to nearby green belts, leading to connectivity complaints across sectors, pushing up the demand for signal boosters.

“It is not only the people who live in high-rises who buy these boosters but in the last one year we have started getting customers from unauthorized colonies too. Since the buildings are closely packed, most residents do not get proper mobile network. The boosters are easy plug-in devices and are available at cheap prices,” says Sudhanshu Malhotra, a dealer based in Karol Bagh.

And true enough, the product is tailored for every pocket. Starting at Rs 2,000, the devices are available in Karol Bagh, Nehru Place and Chawri Bazar, with prices touching Rs 20,000. According to Sharma, the expensive ones are most-sought after. “Though low-end signal-boosters are priced between Rs 6,000 and Rs 9,000, they are not very effective. Most customers prefer boosters in range of Rs 18,000 and Rs 20,000.”

However, according to Dr AK Aggarwal, president of the Indian Medical Association, Noida, the purchase may hurt not just your pocket, but also your health. “In-house signal boosters should be avoided as it may be a health risk. As the signal is boosted, radiation emission goes up and people in the house, including children, get exposed to higher radiation levels.”

According to Dr Ajay Purung of the Metro Group of hospitals in Noida, the radiation is particularly harmful for pregnant women. “Pregnant women should not spend time near in-house boosters as the radiation can cause abnormalities in the unborn baby.”

However, not everyone in the medical fraternity agrees with Aggarwal and Purung. “As far as I know there is no scientific evidence to suggest that signal boosters or mobile towers can cause such problems,” said Dr Smita Deshpande who heads the psychiatry department at Ram Manohar Lohia Hospital.

“It is difficult to make a statement that these devices cause cancer or tumours. There is not enough scientific evidence. More studies have to be done, people have to be observed over a period of time. I would take that (advisory on mobile radiation) with a pinch of salt,” says Dr Rommel Tickoo, senior consultant, Internal Medicine at Max Healthcare.

According to the World Health Organisation’s International Agency for Research on Cancer (IARC), radiation emitted by cellphone handsets is “possibly carcinogenic to humans” and may cause glioma, a type of brain cancer. It puts radiation from cellphones and microwaves in the same cancer risk category as lead, DDT and chloroform.