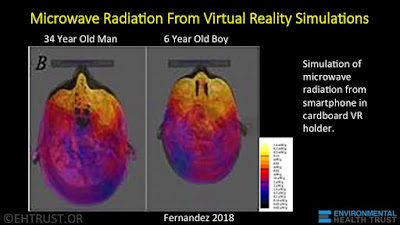 (Washington DC) In an innovative study published today in Environmental Research, researchers simulated microwave radiation from Virtual Reality(VR) with a video-streaming cell phone in a cardboard box placed in front of the eyes. Specific areas of the eyes and critical parts of the brain absorbed between 2 to 5 times more cell phone radiation in the youngest child model compared to the adult model. Children’s health specialists are concerned that higher exposures to unprecedented levels of microwave radiation pose risks of permanent damage to vision, hearing and brain development, and cancer.

This publication is the first to extend FDA computer-based anatomical modeling used for surgical devices to examine absorption of microwave radiation from cell phones held in virtual reality positions. The researchers also investigated microwave radiation with the phone at ear contact. They found that a 3-year old child absorbs about twice as much radiation into the cerebellum, and up to thirtyfold more into the hippocampus–the part of the brain central to memory, emotions, and impulse control.

“When we first began to model cellphone exposures in the brains of toddlers and young children years ago, I never imagined we would see phones placed directly in front of the eyes as children are doing now,” noted study author Professor Claudio Fernandez of the Federal Institute of Rio Grande do Sul, who has previously published several key papers children’s radiation absorption. The researchers initiated this study because children are increasingly using VR systems, that were never evaluated for their health impact.

“Children’s vision, brain and hearing could be permanently impaired by this untested radiation,” stated Devra Davis Ph.D., MPH, a study co-author, and President of Environmental Health Trust (EHT). “This study shows children’s eyes absorb significant amounts of radiation. Children are more vulnerable because their eyes are still developing. Early life insults could mean earlier vision decline. In addition, the eyes contain few blood vessels, so they have no way to cool off.”

“Two-way microwave radiation transceivers, in the form of Smartphones, should not be used directly in front of children’s eyes and brains,” cautions University of Utah Prof. Om Gandhi, an electrical engineer who is one of the original developers of cell phone testing protocols.

“Current cell phone compliance testing does not account for children’s physiology. This new research highlights the importance of realistic modelling of radiation into the different tissues of the eyes and brain. Equally important, there needs to be pre-market testing and modeling of phones in the new ways that people are using phones, such as directly in front of the face as is done with these smartphone enabled virtual reality systems.”

“The American Academy of Pediatrics along with the Health Departments of Connecticut, California and Maryland State Advisory Board on Children’s Health recommend prudent measures should be taken to reduce wireless radiation exposure to children. Cardboard virtual reality holders are marketed to parents and school administrators who are unaware of the risks to children’s health,” stated Theodora Scarato Executive Director of Environmental Health Trust. 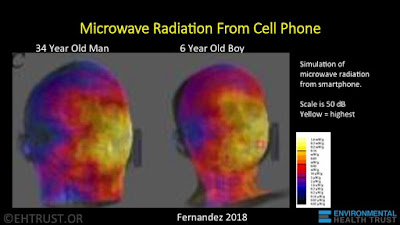 Another study author, Meg Sears, associate at the Ottawa Hospital Research Institute in Canada, and Chair of Prevent Cancer Now, stated: “Children should be protected from microwave radiation. For any wireless device, using airplane mode after an adult downloads the program will greatly reduce microwave radiation.” She added, “The same radiation powering communications is used in chemical industries and products to accelerate reactions. This is efficient in commercial biochemistry, but can spell trouble during sensitive brain development.”

“The French government has just recalled thousands of cell phones because their tests found most cell phones exceeded current test limits for radiation by as much as four fold,” stated Davis referring to the recent large scale cellular phone recalls and software updates (Echo Star Plus, the Alcatel PIXI 4, the Honor 8, the Neffos X1 and the Hapi30, Orange.) She stated that even more recalls are expected as the European Union has updated their cell phone testing protocols after the government of France released hundreds of cell phone radiation tests that measured excessive radiation exposures when the phone was tested in contact with the body.

“Studies of the developing brain have led the Centers for Disease Control (CDC) and Prevention and the U.S. Environmental Protection Agency to issue guidelines to keep toxic exposures to lead and other agents as low as feasible during childhood,” commented Dr. Davis, a former Senior Advisor to the CDC Lead Poisoning Advisory Committee and the National Institutes of Health (NIH). “We require special seatbelts and carseats as well as bike helmets for the young, recognizing that they merit greater protection. It makes no sense to assume that they can safely be exposed to levels of radiation that have never been evaluated for their long-term impacts on growth and development, especially in light of growing evidence that such radiation can damage plants, migrating insects, and other animals, and increase the risk of cancer,” she noted.

Environmental Research publishes original reports describing studies of the adverse effects of environmental agents on humans and animals. The principal aim of the journal is to assess the impact of chemicals and microbiological pollutants on human health. Both in vivo and in vitro studies, focused on defining the etiology of environmentally induced illness and to increase understanding of the mechanisms by which environmental agents cause disease, are especially welcome. Investigations on the effects of global warming/climate change on the environment and public health, as well as those focused on the effects of anthropogenic activities on climate change, are also of particular interest.