No Cell Phones in School! 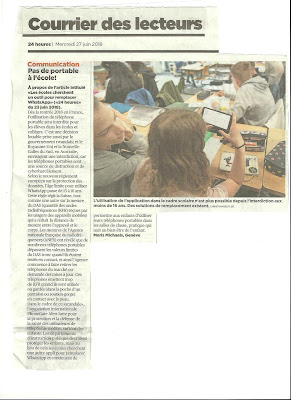 Opinion published 27 June 2018 by the Swiss newspaper "24heures" on cell phones in schools and Phonegate. (translation)

No cell phones in school!

Re. article entitled "Schools are looking for a tool to replace WhatsApp" (24heures, 23 June 2018)

From the start of the 2018 school year in France, the use of cell phones will be banned for students in primary and secondary schools. This is a commendable decision also taken by the Government of Rwanda; and the United Kingdom and New South Wales in Australia, are considering a ban because cell phones are a source of distraction and cyberbullying.

According to the new European regulation on data protection, the age limit for using of WhatsApp has been raised from 13 to 16. This regulation governs Switzerland, as does another on the measurement of SAR (the amount of radiofrequency radiation (RFR) received by users of mobile devices) which has reduced the measuring distance between the device and the body. The measurements of the French National Frequencies Agency (ANFR) have revealed that many mobile phones exceed the limit values for the SAR trunk when tested in contact and thus, the Agency has begun to have phones withdrawn from the market or requested updates. These phones emit too much RFR when they are used or kept (in a pants pocket or bra) in contact with the skin.

In the context of this "scandal", the international association, Phonegate Alert, is fighting for the protection and defense of the health of mobile phone users, especially children. The departments of public education should protect children, but instead, schools are looking for another app to replace WhatsApp and continue to allow children to use their cell phones in classrooms, a practice which causes harm to the well-being of the child.