Incidence of deadly brain tumours in England doubled between 1995 and 2015
powerwatch.org.uk, 9 July 2018 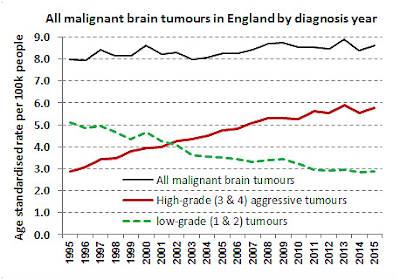 Alasdair Philips, Graham Lamburn (of Powerwatch), with Professor Emeritus Denis Henshaw and Professor Emeritus Mike O'Carroll, have published an open access paper in the Journal of Environmental and Public Health, which demonstrates a very clear and persistent increase in the incidence of the most deadly form of brain tumour, glioblastoma multiforme (GBM). Typical survival after diagnosis is only about 12 months. There is a Supplementary file containing additional relevant data.

We have also expanded on the paper with an invited Letter to the Editor. This contains some important extra information, including a discussion of some preliminary analysis of what we believe are misleading USA data. There is some further commentary on risk factors without promoting any single factor as the most likely cause. The incidence rate has doubled in England between 1995 and 2015, with new cases each year rising dramatically from 983 to 2,531 cases. The increase is largely hidden in overall brain tumour incidence data because, until recently, lower grade less-aggressive tumours have been decreasing by a similar rate.

The study used high-quality data from the UK Office of National Statistics and we found no evidence to suggest the results are due to improved imaging and diagnosis. GBM tumours are almost always quickly fatal and are very rarely missed or mis-diagnosed. We suggest that widespread environmental or lifestyle factors are likely to be responsible. Although most of the cases are in people aged over 55, we see a 50% relative increase across all ages when tested in 5-year age groups. This suggests a widespread universal factor is involved. The data shows evidence of both promotional effects (i.e. making the tumour more aggressive) and the initiation of new (de-novo) tumours, especially in the most recent years. 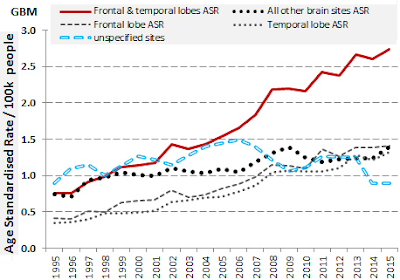 One possible factor is the widespread use of mobile phones and exposure to radio-frequency radiation (RFR). This suggestion is supported by other epidemiological findings such as those of Lennart Hardell's group in Sweden, and the IARCclassification of radio-frequency electromagnetic fields as a Group 2B "possible human carcinogen" (IARC vol 102) based primarily on the strength of the human epidemiology data. Since then the USA National Toxicology Program highly regarded large animal study Peer Review analysis has emerged (see the Microwave News NTP report). This vitally confirms carcinogenic effects occur following RF exposure of animals (the lack of which was given as the reason that the last assessment only classified RFR as "group 2B" rather than at least a "group 2A" probable carcinogen).

The greatest rise in incidence in our study was found in frontal and temporal regions of the brain, which are the main areas of the brain to be highly exposed to RFR from mobile phone use. If this is a contributing factor then, because of the consistent rise over the time period, the relatively low levels of ambient environmental exposure (e.g. from cordless phones and other wireless communication devices) are most likely to be causing the change - not just the relatively high SAR levels from mobile phone handsets.

Another concerning possibility is that an increased exposure to X-rays from CT scans might be contributing to the higher rates of GBM. Over the study period many English hospitals have used CT scans for initial diagnosis of suspected brain tumours, and CT brain scans use fairly significant doses of X-rays, which are already an accepted human carcinogen. David Brenner and Eric Hall discussed this in an article in Radiology in 2012. They particularly cite Pearce, et al, who in a 2012 paper report a statistically significant 2.8-fold increase in risk of developing a later life brain tumour in UK people who had brain CT scans before the age of 22. Sheppard, et al, in a 2018 meta-analysis also found an increased risk of paediatric brain tumours following a single CT brain scan.

We also discuss air pollution and brain tumour incidence in the paper and associated Letter to the Editor. 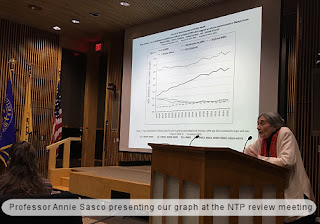 Remarkably, it may even be connected with our ongoing background exposure to ionising (nuclear) radiation particles from the atomic bomb testing from the 1950s-1970s and the fallout from the more recent Chernobyl and Fukushima disasters. The background lifetime dose in the Northern Hemisphere has significantly increased since the 1950s (detailed in an UNSCEAR 2000 report extract in the supplementary file for our paper - download link given earlier). We know that solid cancers can take many tens of years to develop and be diagnosed. Ionising radiation is also an accepted human carcinogen.

Our findings are unlikely to be caused by changes in tumour classification, improved imaging techniques, changes in diagnostic approaches, or demographic confounders such as people simply "living longer".

Our analysis needs to be replicated using other good quality data from other countries. As aggressive GBM tumours are almost always fatal and are now one of the largest cancer killers (the largest cause of death in children and adults under 40 years of age), these results highlight an urgent need for funding more research into their initiation and promotion.

Denis Henshaw, the second author of the new paper, is the scientific director of Children with Cancer UK and Professor Emeritus at the University of Bristol. "Children with Cancer had no direct role in this study", Henshaw said, "our findings illustrate the need to look more carefully at - and to try and explain the mechanisms behind cancer trends. You should always keep your eye out for the unexpected."

Initiation and promoting of cancer involves many complex processes. It is likely that multiple factors, maybe acting synergistically, are causing these serious changes in aggressive brain tumour incidence. Henshaw and Philips (a Trustee of Children with Cancer UK) are organising a ground-breaking 3-day "causes of cancer" conference with many leading international speakers in Westminster, London, from 12-14th September 2018. Tickets are available.