Newsweek Sounds the Alarm AGAIN on Gov’t Research of Cell Phone Radiation. Will Decades of Warnings Ever Matter to the FCC, FDA, or U.S. Elected Officials?

Newsweek Sounds the Alarm AGAIN on Gov’t Research of Cell Phone Radiation. Will Decades of Warnings Ever Matter to the FCC, FDA, or U.S. Elected Officials?
by BN Frank, activistpost.com, 23 July 2018 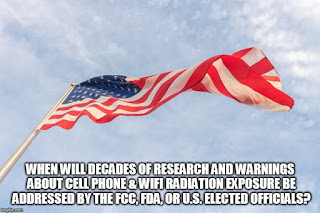 Cell phone manufacturers are warning shareholders(not customers) that they may eventually be found liable for harm from their products. No one seems willing to insure them anymore either.

Decades of research from government, independent, industry and military scientists have already proven that exposure to all sources of cell phone and wireless WiFi radiation are harmful in more ways than cancer risk. Lab testing is available to diagnose if exposure is causing or worsening symptoms and illnesses.

Excerpts from the most recent Newsweek article, “Do Cellphones Cause Cancer? Government Study Reveals ‘Stunningly Important’ Findings” justify AGAIN why we all should start taking radiation exposure more seriously for ourselves and everyone else:

“These studies should have been done before more than 90 percent of Americans, including children, started using radio-frequency-based technologies and devices day in and day out,” said Olga Naidenko, a senior science adviser with the Environmental Working Group, a nonprofit in Washington, D.C.

The program results, issued in preliminary form earlier this year, set off a flurry of calls from public health advocates for the WHO to upgrade its classification of cellphone radiation from “possibly” to “probably” carcinogenic.

Current cellphone safety regulations are based on a premise that is now arguably false: that cellphone radiation can cause harm only by heating tissue. The FDA, however, has no plans to strengthen the regulations.

The U.S. telecommunications industry has not made cellphone usage data available to researchers, which would help in doing population studies.

AGAIN –
“The FDA, however, has no plans to strengthen the regulations.”
The U.S. telecommunications industry has not made cellphone usage data available to researchers, which would help in doing population studies.

What’s more: The Federal Communications Commission (FCC) and many of our state and federal officials are forcing the installation of 4G and 5G small cell towers all over the country, including in front of homes, despite countless warnings from health experts, consumer groups, environmental organizations, and widespread public outcry.

Since 2004, The International Association of Firefighters (IAFF) has opposed cell towers and antennas on station property. If these brave people are concerned about prolonged involuntary exposure – shouldn’t we all be?

For many years already, The American Academy of Pediatrics and other experts have been recommending caution with digital, electronic, and wireless technology – especially among kids. They have encouraged the reassessment of federal safety guidelines, standards, testing and warnings.

While tech inventors have been sending their own kids to private “low tech” schools and limiting its use in their homes, American public school systems have collectively spent $60B to become “high tech.” Kids aren’t better off educationally or otherwise. Besides contributing to excessive screen use, it has also exposed them and staff to prolonged involuntary harmful radiation.

Many who have been elected or paid to protect us have been siding with The Telecom Industry (aka Big Wireless) for 20+ years already. It’s obviously getting much worsevery quickly.

Meanwhile, overseas there has been a conscientious effort to warn citizens especially since 2011 when the World Health Organization (WHO) classified all sources of WiFi as “Possibly Carcinogenic”. France, Germany, Switzerland, India, Israel, and more have issued guidelines advising reduced exposure. Some have funded campaigns to increase awareness. Belgium, France and Israel have banned the sale of cellphones designed for children. Others have banned advertising to children.

In the U.S., TV, film, and marketing – even for prescriptions –continue portraying tech use in ways that violate even outdated federal safety guidelines. Marketing products to children is 24/7. Even Sesame Street encourages tech use despite warnings.

Radiation concerns continue to be covered by broadcast news stations and many others:

Which brings us back to past and present warnings from Newsweek confirming that the FCC and FDA are still refusing to protect Americans.

In 2013, the Southern California breast cancer surgeon and five other doctors wrote in the journal Case Reports in Medicine about Frantz’s tumors and those of three other young women. Each of them regularly carried a cellphone in her bra. “I am absolutely convinced,” West tells Newsweek, “that there is a relationship between exposure to cellphones and breast cancer in young women who are frequent users.”

Still, the typical phone user’s level of exposure troubles health officials. Cellphone transmitters have to be strong enough to reach a cellphone tower as far away as 22 miles, which means the intensity of the signal at point-blank range is high. Holding a cellphone next to your ear increases the intensity of the radiation by 10,000 times, compared with holding it 6 inches away.