5G is already linked to rising health problems… concerns about “health calamity” on the rise
By Vicki Batts, newstarget.com, 31 July 2018 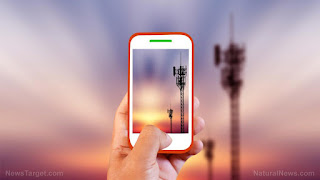 Fifth generation technology for mobile networks, known as 5G, is set to make its big debut in Sacremento, CA this summer — but faster internet speeds aren’t all this new technology is known for. Concerns about the effects of the new cell service are mounting, especially with the growing body of research tying cell phone radiation to cancer and other adverse health outcomes. Outside the lab, firefighters and others exposed to 5G devices say that they are already experiencing negative cognitive effects, including confusion and memory issues.

Radiation from cell phones and cell towers has already been linked to brain cancer. With the advent of 5G, there will be more towers that are closer together — a recipe for disaster, according to health advocates. Multiple cell service providers have announced that they will be rolling out 5G for faster speeds, but the impact of the new network is poorly understood at best. More, concerns about what the long-term effects of the near-constant radiation bath provided by 5G networks are continuing to grow — and for good reason.

The kind of radiation emitted from cell phones, cell towers and related devices is known as “electromagnetic radiation,” often abbreviated to EMF or EMR. It is also considered to be a type of non-ionizing radiation. While it is not the same radiation you’d fear in a nuclear accident — that doesn’t mean it’s as “risk-free” as industry leaders make it out to be.

Currently, cell phones and other devices rely on the 4G network. 5G, or “Fifth Generation” technology promises speeds of up to 100 times faster than the current model. In order to achieve such speed, however, there is a caveat: Thousands of more base stations need to be installed in order for it to work. 5G waves cannot travel as far as 4G; experts say that one new base will need to be installed for every 12 homes. This means that while you might not currently live near a cell tower, soon these new base stations will become virtually impossible to avoid.

Combine the prevalence of 5G base stations with the risks of EMR radiation and the potential hazard to human health is virtually impossible to ignore — unless you’re a regulator or an industry leader, perhaps.

A health hazard waiting to explode

There is no shortage of reasons to be worried about the impact of 5G networks on human health, but the recent reports of health complaints from a group of San Francisco firefighters ought to give everyone pause. While the promise of faster speeds and better connectivity sounds like a dream come true to cellphone lovers, it is becoming quite clear that the cost of 5G is simply too high.

Firefighters from San Francisco say that they began experiencing an array of unusual side effects — after 5G equipment was installed in and around their firehouses. Symptoms reportedly included memory problems and confusion. The firefighters say the symptoms only stopped after they relocated to different fire stations without 5G devices nearby.

It’s not just the firefighters, either. In Gateshead, England, scientist Mark Steele says that there’s been an uptick in reproductive issues and other health problems since the city’s new wireless streetlights were installed. Miscarriages, still births, nosebleeds and insomnia are among the consequences he’s reportedly observed in the community.

“We are seeing babies dying in the womb as these transmitters are situated outside people’s bedroom windows. It’s a humanitarian crisis,” Steele contended.

Many studies have shown that there is a link between EMR from cellphones and cancer. In fact, a recent, large-scale government study found an association between cell phone radiation and brain cancer and heart tumors.

The $25 million study carried out by the U.S. National Institutes of Health’s National Toxicology Program (NTP) has shed light on the very real dangers of cell phones and other wireless devices. The NTP study focused on exposing rats to two types of radiation emitted by cell phones for a nine-hour period each day. The radiation bath began while the rats were still in utero, and was continued until the rats died a natural death. An expert review panel analyzed the findings and were shocked to see that the radiation from cell phones was linked to increase in tumors of the brain and heart. Additionally, the reviewers also observed a “statistically significant” increase in damage to heart muscle.

Advocates say that the implementation of 5G is a recipe for total “health calamity.”