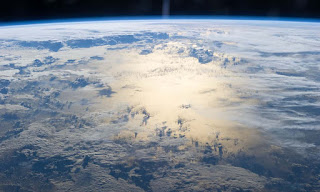 (Photo): Spraying or injecting tiny airborne particles into the stratosphere has been regarded as one of the prime possibilities for geoengineering, by reflecting some of the sun’s rays back into space before they can warm the Earth. Photograph: ISS/NASA

Proposals to combat climate change by reflecting the sun’s rays back into space would cause widespread crop failure, cancelling out any benefits to farming from the reduction in warming, according to new research.

By examining the effects of volcanic eruptions on agriculture – which has a similar effect to proposed artificial methods of scattering solar radiation through aerosols – scientists have concluded that such methods could have unintended consequences.

“[The research was to] find a way to examine the side effects of geoengineering without experimenting on the climate,” said Jonathan Proctor of University of California, Berkeley, lead author of the paperpublished in the peer review journal Nature. “[We found] potential adverse effect on agricultural production.”

But he said there could be other positive effects that were less easy to capture.

The findings deal another blow to proposals to use geoengineering to reduce or delay global warming, which some scientists think may be necessary to stave off the worst effects of rising greenhouse gas emissions.

Spraying or injecting tiny airborne particles into the stratosphere has been regarded as one of the prime possibilities for geoengineering, by reflecting some of the sun’s rays back into space before they can warm the Earth.

The scientists studied the eruption of El Chichón in Mexico in 1982 and the eruption of Mount Pinatubo in the Philippines, both of which caused large quantities of sulphate particles to enter the stratosphere. This created a “veil” which reduced the amount of sunlight reaching the Earth’s surface.

In the study, the researchers examined the aerosol levels, solar radiation and crop yields. The deflection of sunlight had a negative effect on the yields of many staple crops, including rice, wheat and maize. They concluded that the impacts on crops of sending particles deliberately into the stratosphere would probably be similar, and that the beneficial effects on crop yields from the resulting cooling would be “essentially negated” by the loss in crops due to the reduction in sunlight, failing to remove the threat climate change poses to agriculture and food security.

Hugh Hunt, reader in engineering at Cambridge University, who was not involved in the research, said solar radiation management [SRM] was “no magic bullet”, but the effects should be compared with doing nothing. “We may well decide to use SRM to slow or reverse the melting of Arctic sea ice and to preserve the Greenland ice sheet. We will then be glad to have saved valuable land and the homes of millions of people from rising sea levels. Moreover, in an SRM world, agriculture will be sustained by a more stable and predictable climate,” he told the Guardian.

“SRM, rather like chemotherapy, is not something one would wish on a healthy planet. The Earth is sick and it is likely that any cure such as SRM will have unpleasant side effects. What we really ought to be doing is to halt the rise of atmospheric greenhouse gases, not just sometime in the future but now.”

Matthew Watson, of the school of Earth sciences at Bristol University, added: “It’s worth noting that this research only states that SRM would not necessarily improve crop yields and that there are other potential co-benefits and risks that must be carefully considered.”

Previous research has shown that the use of aerosols for geoengineering could have a substantial impact on weather patterns, for instance on the frequency and intensity of hurricanes, or could cause changes in rainfall such as droughts in vulnerable regions.

Email ThisBlogThis!Share to TwitterShare to FacebookShare to Pinterest
Libellés : Geo-engineering