Another Fitness Tracker Recall, this Time Due to Burn Risk 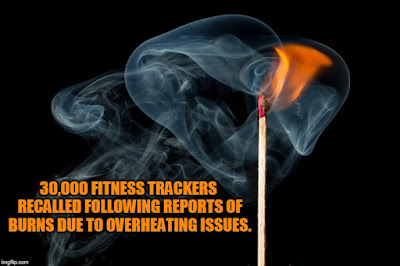 "It’s pretty insane that some insurance companies have recently started encouraging or requiring clients to wear Fitbits and other activity trackers. You’d think they’d want their clients to remain healthy and of course, alive. Perhaps the bigger irony is that many insurance companies aren’t covering harm caused by wireless radiation exposure either."

Just announced! ANOTHER Fitness Tracker recall! This time it’s due to burn risk.

Portland-based Provata Health has recalled around 30,000 fitness trackers following reports of burns due to overheating issues.

The recall was made following 13 reports of overheating issues while charging or during use. In three cases, users suffered burns to their wrists under the watch body.

This is very reminiscent of issues that occurred with Intel owned Basis fitness trackers back in 2014. A small number of people reported that their Peak watches overheated, and in some cases caused discomfort, blistering or burns on their wrist. Intel recalled all of the watches and issued refunds to customers. The company no longer supports the watch, and has since shut down access to customer data.

Activist Post has reported about Fitbit recalls and complaints MANY TIMES ALREADY since April.