The city of Mill Valley has enacted an urgency ordinance to regulate “small cell” towers amid concerns that cellphone companies want to grow their 5G networks and install new equipment in Marin. 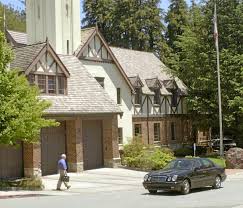 “We do intend to do more work and studies to craft a permanent ordinance within the next year,” Mill Valley Mayor Stephanie Moulton-Peters said Friday. “The urgency ordinance has standards to limit and prohibit the installations of devices in residential neighborhoods, but there is more that we can do.”

The decision came on a unanimous vote by the City Council on Thursday, after residents from across Marin packed the council chambers as part of a campaign urging local officials to block cellphone companies from attempting to build 5G towers in the county. No proposals for 5G towers have been submitted to Mill Valley, staff said.

The issue is that 5G towers, which would allow for faster and higher-capacity video streaming and other transmissions, could exacerbate health symptoms already suspected as a result of exposure to electromagnetic fields, according to the EMF Safety Network, a group advocating to keep communities EMF-free.

Those symptoms can include fatigue, headaches, sleep problems, anxiety, heart problems, learning and memory disorders, ringing in the ears and increased cancer risk, according to the EMF Safety Network website.

“What 5G does is it adds another cloud to what we refer to as ‘electromagnetic smog’ into an environment that is already pretty saturated,” said Fairfax resident and activist Valeri Hood. “In Fairfax, what we’re doing is asking our council to step up in the way councils have in the past, and just say no to 5G.”

Before crusading to Mill Valley City Hall, Hood along with several others voiced their grievances to the Fairfax Town Council. After a nearly four-hour hearing with more than 20 speakers on Wednesday, the council kicked the issue back to staff to work out the details with the town’s Planning Commission, which will be tasked with developing an ordinance that would address these health and safety concerns, said Garrett Toy, Fairfax town manager.

The first Planning Commission meeting on the topic will be Oct. 18. Toy suspects that it will take at least two meetings for the commission to make a recommendation to council, he said.

Local officials are grappling with the issue across Marin. San Anselmo and Ross have adopted ordinances similar to Mill Valley’s, while other Marin communities are struggling with how to develop rules, a task complicated by federal restrictions already in place.

“There are some federal and state regulations that preempt local control,” said Fairfax Mayor Peter Lacques. “That’s what we’re grappling with, to try and preserve as much as possible Fairfax’s ability to regulate small cells to protect the town.”

Those federal and state laws make it so municipalities cannot regulate:

New wireless telecommunication facilities are permitted in commercial and open space zoning districts in Mill Valley. Wireless carriers will be required to apply for a conditional use permit that will be reviewed by the Mill Valley Planning Commission for new wireless facilities, and by the zoning administrator for smaller amendments to existing permits. Wireless facilities on rooftops on private property might qualify for a ministerial review and approval based on state and federal laws related to the collocation of facilities, Staude said.

Wireless telecommunications in the right of way in commercial areas must be 1,500 feet apart. Approval will be granted based on development standards, design guidelines, findings and conditions of approval established in the new ordinance, Staude said.

According to the U.S. Centers for Disease Control and Prevention, the jury is still out on the health risks of exposure to EMFs.

“Studies have shown that some workers exposed to high magnetic fields have increased cancer rates,” the CDC reported on its website. “But such associations do not necessarily show that EMF exposures cause cancer (any more than the springtime association of robins and daffodils shows that one causes the other). Scientists have looked carefully at all the EMF evidence, but they disagree about the health effects of EMFs except to say that better information is needed.”

In May, Verizon was forced to withdraw its application to build two “small cell” towers in Sebastopol after four months of heavy opposition by residents and attorneys for the EMF Safety Network.

Verizon has been busy expanding its 5G network in cities like Indianapolis and Houston, but there are no plans in place now for the company to introduce the technology to Marin, Verizon spokeswoman Heidi Flato said.

“All Verizon facilities are required to comply with Federal Communications Commission (FCC) safety standards, and Verizon is committed to maintaining compliant facilities and has implemented a comprehensive compliance program in which we regularly check facilities for compliance,” Flato wrote in an email. “Small cell technologies have been in widespread use since the 1940s. This technology is constantly reviewed by health and safety organizations worldwide to ensure safety. This technology operates well within the safety guidelines set by the FCC.”