We are very pleased to note that this article contains a section on the Phonegate industrial and health scandal.

4 How Big Wireless Convinced Us Cell Phones and Wi-Fi are Safe
projectcensored.org, 2 October 2018 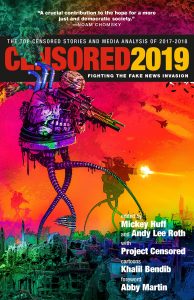 A Kaiser Permanente study (published December 2017 in Scientific Reports) conducted controlled research testing on hundreds of pregnant women in the San Francisco Bay area and found that those who had been exposed to magnetic field (MF) non-ionizing radiation associated with cell phones and wireless devices had 2.72 times more risk of miscarriage than those with lower MF exposure. Furthermore, the study reported that the association was “much stronger” when MF was measured “on a typical day of participants’ pregnancies.” According to lead investigator De-Kun Li, the possible effects of MF exposure have been controversial because, “from a public health point of view, everybody is exposed. If there is any health effect, the potential impact is huge.” [For previous Project Censored coverage of this topic, see Julian Klein and Casey Lewis, with Kenn Burrows and Peter Phillips, “Accumulating Evidence of Ongoing Wireless Technology Health Hazards,” in Censored 2015: Inspiring We the People.]

A March 2018 investigation for the Nation by Mark Hertsgaard and Mark Dowie showed how the scope of this public health issue has been inadequately reported by the press and underappreciated by the public. Hertsgaard and Dowie reported that the telecom industry has employed public relations tactics, first pioneered by Big Tobacco in the 1960s and developed by fossil-fuel companies in the 1980s, to influence both the public’s understanding of wireless technologies and regulatory debates.

The wireless industry has “war-gamed” science by playing offense as well as defense, actively sponsoring studies that result in published findings supportive of the industry while aiming to discredit competing research that raises questions about the safety of cellular devices and other wireless technologies. [On “war-gaming,” see, for example, a 1994 Motorola memo, now published online.] When studies have linked wireless radiation to cancer or genetic damage, industry spokespeople have pointed out that the findings are disputed by other researchers. This strategy has proven effective, Hertsgaard and Dowie reported, because “the apparent lack of certainty helps to reassure customers, even as it fends off government regulations and lawsuits that might pinch profits.” As Hertsgaard and Dowie concluded,

Lack of definitive proof that a technology is harmful does not mean the technology is safe, yet the wireless industry has succeeded in selling this logical fallacy to the world . . . The upshot is that, over the past 30 years, billions of people around the world have been subjected to a massive public-health experiment: Use a cell phone today, find out later if it causes cancer or genetic damage. Meanwhile, the wireless industry has obstructed a full and fair understanding of the current science, aided by government agencies that have prioritized commercial interests over human health and news organizations that have failed to inform the public about what the scientific community really thinks. In other words, this public-health experiment has been conducted without the informed consent of its subjects, even as the industry keeps its thumb on the scale.

The stakes of this public-health experiment continue to rise with the increasing prevalence of Wi-Fi and Bluetooth technologies as well as the development of the “Internet of Things” and anticipated 5G wireless networks.

Multiple studies, including one published in the American Journal of Epidemiology in October 2017, have correlated long-term exposure to cell phone radiation with the risk for glioma (a type of brain tumor), meningioma, DNA damage, and other health risks. In May 2017, the California Department of Public Health released safety guidelines in response to possible health impacts from cell phone radiation. Yet this information was withheld from the public for seven years, and only released after litigation. The American Academy of Pediatrics has clear recommendations to reduce children’s exposure to cell phone radiation—yet pregnant women continue to use wireless devices on their abdomens and children are given cell phones as toys.

The wireless industry claims to be in compliance with health and safety regulations and opposes mandatory disclaimers about keeping phones at a safe distance. Yet they also oppose updating cell phone radiation testing methods in ways that would accurately represent real-life use.

As the Environmental Health Trust and Marc Arazi have reported, recent scientific research and court rulings from France underscore these concerns about wireless technology radiation. Under court order, the National Frequency Agency of France (ANFR) recently disclosed that nine out of ten cell phones exceed government radiation safety limits when tested in the way they are actually used, next to the human body. As the Environmental Health Trust reported, French activists coined the term “PhoneGate” because of parallels to the 2015 Volkswagen emissions scandal (referred to informally as “Dieselgate”) in which Volkswagen cars “passed” diesel emission tests in the lab, but actually had higher emissions when driven on real roads. In the same way, cell phones “passed” laboratory radiation tests when the “specific absorption rate” (SAR), which indicates how much radiation the body absorbs, was measured at a distance of 15 mm (slightly more than half an inch). However, the way people actually carry and use cell phones (for example, tucked into a jeans pocket or bra, or held in contact with the ear) results in higher levels of absorbed radiation than those found in lab tests.

The French data was also corroborated by a 2017 independent investigation by the Canadian Broadcasting Corporation (CBC) which tested cell phones and found SAR values that surpassed US and Canadian allowable standards when the phones were tested in body contact positions. These findings were replicated by the US Federal Communications Commission, which concluded that radiation levels reach as high as 300 percent of the limit for safe exposure.

As reported by Environmental Health Trust (EHT), French law ensures that SAR levels are identified prominently on cell phone packaging and that cell phone sales are banned for young children. In 2016, new French policies stated, “ALL wireless devices, including tablets, cordless phones, remote controlled toys, wireless toys, baby monitors and surveillance bracelets, should be subjected to the same regulatory obligations as cell phones.” EHT also reported that, according to Le Monde, France would attempt to ban cell phones from schools, colleges, and playgrounds as of 2017.

Although local media might announce the findings of a few selected studies, as the San Francisco Chronicle did when the Kaiser Permanente study was published, the norm for corporate media is to report the telecom industry line—that is, that evidence linking Wi-Fi and cell phone radiation to health issues, including cancer and other medical problems, is either inconclusive or disputed. Such was the case, for example, when the Wall Street Journal published an article in February 2018 titled “Why the Largest Study Ever on Cellphones and Cancer Won’t Settle the Debate.” Similarly, in May 2016 the Washington Post published an article titled “Do Cellphones Cause Cancer? Don’t Believe the Hype.” As Hertsgaard and Dowie’s Nation report suggested, corporate coverage of this sort is partly how the telecom industry remains successful in avoiding the consequences of their actions.

Mark Hertsgaard and Mark Dowie, “How Big Wireless Made Us Think That Cell Phones are Safe: A Special Investigation,” The Nation, March 29, 2018, https://www.thenation.com/article/how-big-wireless-made-us-think-that-cell-phones-are-safe-a-special-investigation/.