Our Letter to the Editor on the Final U.S. NTP Report on Rats and Mice Exposed to Cell Phone Radiation

Two places where the Suisse Romande press mentions the final report of U.S. National Toxicology Program study on rats and mice exposed to cell phone radiation, (issued on 1 November 2018): our Letter to the Editor published in the Tribune de Genève and the current issue of Illustré : interview with Dr. Daniel Favre, President of ARA, on 5G.  See our Facebook page.

We were shocked by the RTS report on back pain in young children and adolescents. According to one study, one in three children has suffered from back pain in the past 12 months, the main cause being screen abuse. The BBC reports that surgical students have spent so much time in front of screens and so little time using their hands that they have lost the dexterity to sew up patients. The blue light emitted by screens is particularly harmful to children's eyes. Do we heed these warnings? We would like the Geneva authorities to launch an awareness campaign, but they are distracted by the chaos reigning in the government.

The media doesn't alert us. The final report of the US government's $30 million National Toxicology Program study on rodents exposed to mobile phone radiation concluded that there is "clear evidence" of cancer. Most American media have downplayed the results and other countries have never mentioned it. The $17 trillion mobile phone industry has stifled media and government agency reporting. Mobile devices have never been subjected to safety tests, so we are all being treated like laboratory rats in a deadly experiment.

* Letters are limited to 1400 characters, counting spaces, and the Editor chooses the title. 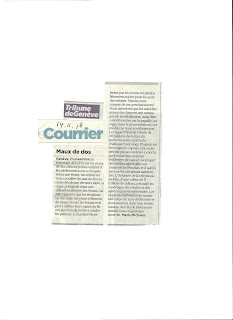