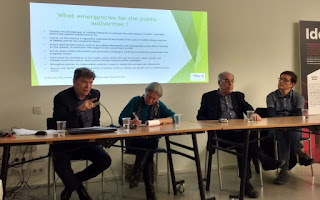 The city of Barcelona has decked itself out entirely in the colors of the Mobile World Congress during the 4 days of the largest international mobile phone exhibition. From February 25 to 28, 2019, under the impetus of the GSMA organization, which brings together manufacturers from all over the world, it is only about new products, gadgets and the star… 5G technology.

Not quite because, in front of this congress, a great first, were present in the city of the famous architect Gaudi, the associations Alerte Phonegate, Robin des Toits and Electro y Quimico sensible, for a press conference on Monday, February 25 in the premises of the prestigious law firm Col-Lectiu Ronda to discuss the serious public health issues of those technologies.

The Spanish association, through its regional spokesman Juan Antonio Rivera Villa, announcing the text presented to the Chamber of Deputies by four members of the Podemos party asking how the Phonegate scandal is being addressed in Spain, asks the question :

“What is the government doing to ensure that all mobile phone users, mainly young people, are not exposed to higher levels than required by regulation, as has been demonstrated in France until the authorities intervene?”

The French association Robin des Toits, represented by its president Pierre-Marie Théveniaud, on its behalf, asks both industrialists and public authorities:


For his part, Dr Marc Arazi, President of Alerte Phonegate, welcomed the holding of this first counter-event and hopes that it will be continued in the coming years:

“There are hundreds of thousands of people around the world who care about public health issues related to mobile phones. They must come together in the future to make their voices heard. We have taken a step in the right direction with this first event”

He made an appeal:


Appeal supported and relayed from the United States by Dr Devra Davis, President of the NGO Environmental Health Trust and member of the Phonegate Alert Scientific Committee:

“Thanks to the efforts of Phonegate Alert, the European Community is now aware that the official tests of the French government confirm what many of us have long advised. The current test system is rigged because the phones are not tested directly on the body as they are used. The majority of mobile phones in use exceed current safety standards by up to four times. Manufacturers must recall and re-label mobile and other wireless devices so that operating systems, software and hardware are modified to protect public health and the environment.

Stefano Bertone, one of the Italian lawyers who has just obtained the Italian State’s sentence to launch a national information campaign on the health risks associated with mobile phone use, supported the remarks made at the conference. See the video:
https://www.youtube.com/watch?time_continue=1&v=lTbYiCFzFkY