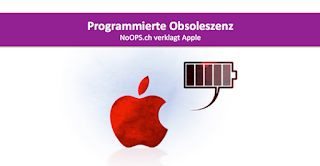 In October 2017, Apple released an update that severely impacted the performance of its phones, although some still ran under warranty. The reduced battery life was one of the most controversial topics. As a result of several lawsuits around the world, Apple had to admit that the performance of some phones was deliberately reduced.

This controversial act is called programmed obsolescence and is currently not recognized as a crime in Switzerland. Nevertheless, Thomas Putallaz, President of the No Obsolescence Switzerland Association (NoOPS.ch) *, filed a lawsuit against Apple in the hope of abolishing this practice. The introduction of the procedure costs CHF 3'000.-, who wants to support the association via crowdfunding, click here .

NoOPS.ch is a non-profit association within the meaning of Article 60 ff. of the Swiss Civil Code, based in Geneva. He pursues the following goals:

NoOPS.ch sees its action in two phases. The first is to make a landmark decision on the case, which refers to the batteries and the slowing down of Iphones. The second, based on this landmark decision, is to fight more generally against planned obsolescence.