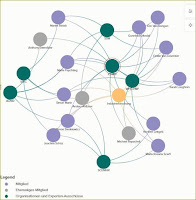 According to Eric van Rongen, chairman of the International Commission on Non-ionizing Research Protection (ICNIRP), in August or September the ICNIRP plans to publish its revised guidelines regarding safe human exposure limits to radiofrequency (RF) electromagnetic fields (EMF) (100 kHz - 300 GHz).

On April 17, 2019, Van Rongen made a presentation about the revised guidelines to the French National Frequency Agency. The ICNIRP guidelines will still be based only on thermal or heating effects. The Commission continues to ignore the many hundreds of peer-reviewed studies that have found bioeffects and health effects from exposure to low intensity, non-thermal levels of RF radiation.

The 13 commissioners of the ICNIRP strongly disagree with more than 240 EMF scientists who signed the International EMF Scientist Appeal. These scientists who have published over 2,000 papers in professional journals on EMF and biology or health state:

"The various agencies setting safety standards have failed to impose sufficient guidelines to protect the general public, particularly children who are more vulnerable to the effects of EMF. The International Commission on Non-Ionizing Radiation Protection (ICNIRP) established in 1998 the “Guidelines For Limiting Exposure To Time-Varying Electric, Magnetic, and Electromagnetic Fields (up to 300 GHz)” . These guidelines are accepted by the WHO and numerous countries around the world. The WHO is calling for all nations to adopt the ICNIRP guidelines to encourage international harmonization of standards. In 2009, the ICNIRP released a statement saying that it was reaffirming its 1998 guidelines, as in their opinion, the scientific literature published since that time “has provided no evidence of any adverse effects below the basic restrictions and does not necessitate an immediate revision of its guidance on limiting exposure to high frequency electromagnetic fields . ICNIRP continues to the present day to make these assertions, in spite of growing scientific evidence to the contrary. It is our opinion that, because the ICNIRP guidelines do not cover long-term exposure and low-intensity effects, they are insufficient to protect public health."

During the public consultation period, about 120 contributors provided the ICNIRP with more than 1,000 comments regarding the draft guidelines. Does the ICNIRP plan to publish these comments? How many contributors called for RF exposure guidelines that protect humans and other species from health risks due to exposure to low-intensity or non-thermal levels of RF radiation?

The slides from the van Rongen presentation (marked "Draft -- Do Not Cite or Quote") are available at: https://www.anfr.fr/fileadmin/mediatheque/documents/expace/workshop-5G/20190417-Workshop-ANFR-ICNIRP-presentation.pdf