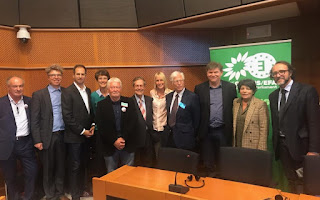 Following the invitation on October 1, 2019 to the European Parliament of Dr Marc Arazi by MEPs Philippe Lamberts, Michèle Rivasi and Klaus Buchner of the Greens/EFA, and the alert issued to parliamentarians and organisations gathered at this event on the Phonegate health and industrial scandal, a written question was tabled by Michèle Rivasi on October 9, 2019 before the European Commission.

We would like to thank her for her support and mobilisation at European level to protect the health of hundreds of millions of mobile phone users.

At the end of 2016, Europe had 745 million mobile subscriptions. What corrective actions will manufacturers and public authorities in the various Member States take to inform their customers and the public? Will existing models be “updated”, with software that will limit their influence? Which ones will be withdrawn from the market? MEP Michèle Rivasi is asking for urgent and precise answers from the European Commission in the management of this new health crisis affecting consumer protection.

Overexposure of the public to mobile phone radiation: What is Europe doing?

Do you keep your mobile phone with you, in the pocket of a shirt? Or glued to your ear to make a phone call? When worn close to the body, most mobile phones placed on the market before 2016 emit so much radiation that they exceed exposure limits. These are the official conclusions of a set of radiation measures made in France since 2012, which have remained largely confidential so far. In its opinion published on 21 October 2019, the Agence française de sécurité sanitaire de l’alimentation, de l’environnement et du travail (ANSES) recommends that measures be taken to ensure that users are no longer exposed to high levels when phones are worn close to the body. The alert came from France but the issue is also European, says MEP Michèle Rivasi, who has been following the impact of electromagnetic waves on life for more than 20 years.

“We knew that mobile phones “in motion” radiated more than the same phones used “motionless”. It is now a fact that most mobile phones worn against the skin are more dangerous than when held away from the body, used with an earpiece or on loudspeaker mode.

SAR, or Specific Absorption Rate, is the indicator used to estimate the body’s exposure to radiation from a mobile phone. At the head or trunk level, the regulatory SAR limit value in France and Europe is set at 2 W/kg, the threshold above which biological effects have been observed.

Previously, SAR measurements were made at an average distance of 15 mm from the body. From now on, since 2016, the European RED directive requires the SAR to be measured by placing the mobile phone at a maximum distance of 5 mm from the skin. The results under these realistic conditions are then significantly different. Phones marketed with SAR values that previously met the standards are now exceeding them. “Tests on nearly 300 phones were carried out between 2012 and 2016,” summarizes the ANSES opinion published on 21 October. A large proportion of the phones tested had SAR values above 2 W/kg, some exceeding 7 W/kg on contact. »

On 1 October 2019, during a meeting I organised at the European Parliament on 5G and the precautionary principle, Marc Arazi of the PhoneGate Alert association warned:

“Most mobile phones exceed regulatory values but we also discovered that there was a 10-fold difference between the value displayed in the manuals and advertisements of some manufacturers and the DAS value found in tests in France. Other independent tests conducted in 2018 and 2019 in the United States at 2 mm from the skin show that several very popular phones exceed the ceilings. The iPhone 7 has values twice as high as the American standard of 1.6 W/Kg. For the iPhone 8, this is three times the norm. The Samsung galaxy S8 has the most worrying rates: five times the US standard. This is a widespread, systematic and large-scale deception by manufacturers against consumers about a legal value – the DAS – indicating the conformity and the absence of health danger of a mobile phone. »

What is Europe doing to inform its 500 million consumers?

Articles 40 and 42 of Directive 2014/53/EU (RED Directive) on the harmonisation of the laws of the Member States relating to the availability of radio equipment on the market, lay down the obligations of the economic operator and the Commission as regards corrective measures or withdrawal from the market in respect of equipment which does not comply or which may present a risk.

In my written question at the beginning of October, I reminded the Commission that when 95 mobile phones were tested in France in 2015, the Specific Absorption Rate (SAR) of 85 of them (89% of phones) was above the limit value (2 W/kg) when the phones were tested in contact with the body. Since then, as a result of these controls, 17 mobile phones have either been withdrawn from the market or updated in France. At the end of 2016, Europe had 745 million mobile subscriptions. What corrective actions will manufacturers and public authorities in the various Member States take to inform their customers and the public?

The most radiating mobiles must be removed from the market!

These facts are very serious and should not be overlooked. For several years now, we have been denouncing the methods used to calculate the SAR, which are too vague, too approximate and, above all, underestimate people’s actual exposure. The measures taken in France, which the PhoneGate Alert association has made public since 2016, reveal the importance of the scandal.

By reducing public exposure measures, manufacturers have knowingly and deliberately caused the massive overexposure of several hundred millions of people throughout the European Union to mobile phone radiations, to values above the legal limits. And this has been the case for nearly 20 years for the oldest users.

The official alert comes from the French authorities, which have announced that they have asked the European Commission “to strengthen the requirements applicable to new mobile phones placed on the market”. But what exactly is the situation? What about the old models? Will they be “updated”, with software that will limit their influence? Which ones will be withdrawn from the market? We expect urgent and precise answers from the European Commission in the management of this new health crisis affecting consumer protection. It should be recalled that since 2011, in the light of available studies, the International Agency for Research on Cancer has classified microwave radiation from mobile phones as a “possible carcinogen”. Denial is no longer an acceptable option. »

October 1, Workshop on 5G, Health Risks and Precautionary Principle
“No impact studies on life and the environment? No 5G!”
https://www.michele-rivasi.eu/a-la-une/pas-detudes-dimpact-sur-le-vivant-et-lenvironnement-pas-de-5g

October 21, 2019, Opinion on the ANSES Report of July 2019
“Exposures to mobile phones worn close to the body”
http://bit.ly/Rivasi_ANSES_DAS

October 25, 2019, Communiqué of the French Government
“to limit exposure to emissions from certain mobile phones and better inform the public”
https://solidarites-sante.gouv.fr/IMG/pdf/191025-_cp_anses.pdf