California: Police Violence Breaks Out in Struggle over 4G/5G Poles in Berkeley 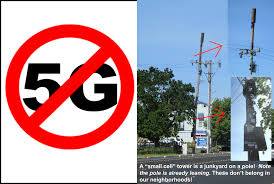 A long, quiet struggle over the introduction of a new era of "4G/5G" microwave transmitters in Berkeley neighborhoods erupted into violence between midnight and dawn on October 5. Once again, the issue involved a struggle between local autonomy and corporate hegemony.

As the Natural Resources Defense Fund notes, the Federal Communications Commission (FCC) has sided with the Telecom giants (Verizon, AT&T, Sprint, etc) and "eliminated environmental and historical review for siting certain cell towers and other wireless facilities." Under FCC law, states, towns, and individuals are specifically prohibited from citing health or environmental concerns when objecting to the planned "roll-out" of hundreds of thousands of wireless antennas that need to be placed every 500 feet in business districts and neighborhoods.

The FCC also refuses to update outmoded health and environmental guidelines for electromagnetic frequency (EMF) exposures that were set in the early 1990s.

AT&T is now starting to install the first of these new transmitters on already over-burdened wooden power poles next to the Monterey Market, Berkeley Natural Foods, the Berkeley Unified School District building and the Thousand Oaks Primary School.

Scores of North Berkeley neighbors have complained that they never received the required legal notices that were supposed to alert them to the planned installations and thereby unwittingly lost their right to appeal the installations outside their homes. The residents also insist that current existing telecom services are more than adequate and they neither need, nor want, additional small-cell transmitters on their streets.

One of the concerned residents living near the Gilman Street pole was Clifford Fred, a Former Planning Commissioner. Fred was outraged: “I’m shocked that city officials knew that AT&T violated Berkeley Municipal Code 16.10.040 by not notifying people within 500 feet of the 1321 Gilman or 1550 Hopkins poles before the controversial cell towers were approved, but let AT&T get away with violating the city laws. Officials used to care but now are keen on letting big telecom companies have their way.”

In response to these incursions, a coalition of neighbors and activists calling themselves WiRED (Wireless Radiation Education and Defense) has been showing up at the targeted sites to quietly challenge the work crews—and occasionally finding the work permits to be unsigned or flawed. WiRED argues that installing small-cell wireless antennas does not qualify as "essential work" during the pandemic.

In most cases, the interactions between workers, officers and demonstrators has remained respectful and peaceful with the work crews usually packing up and leaving the area. As WiRED activist Phoebe Anne Sorgen noted: "the cops made it clear that they'd rather not arrest us" and provided "plenty of opportunity to avoid arrest." But recently, tensions have begun to escalate.

On September 21, WiRED volunteers (alerted by local neighbors) showed up at 1:30AM to confront workers setting up security fences around a pole on Gilman Street. With eight Berkeley police on hand, one activist recalled, "we pushed as far as we dared and were threatened with arrest several times but were not arrested."

On October 5, a group of ten WiRED "pole watchers" (including some "camping out" in a tent pitched on the sidewalk next to the disputed pole on Gilman were reportedly "man-handled" by a contingent of BPD officers who physically assaulted the activists. Sorgen (a veteran of many protests) said her treatment "wasn't excessive" though "there's a sore spot on one forearm" from being dragged down the street "because I went limp."

According to witnesses, at least 20 police showed up. One officer announced: "If you don't want to get arrested, get out of the way" but that was immediately followed with the order: "Every officer grab a person!"

"It was really brutal and bad," according to Juty Blue, who was standing vigil at the Gilman pole. "It was 3:30 morning and there were only eight of us, which made it easier for police to rough us up. They grabbed and pulled and pushed people. They were rude and horrible."

Sierra Murphree, who was occupying a tent on the sidewalk, was dragged away from the pole while still inside the tent.

At the same time, a smaller contingent of protesters was confronted by police at the construction site near the Monterey Market. A 61-year-old protestor named Jason Winnett suffered a pulled muscle after being roughed-up by the officers. Meaveen O'Connor was left with bruises on her body and CodePink campaigner Cynthia Papermaster said the police were so aggressive she feared "they were going to break my arm."

Mayor Jesse Arreguin responded by saying was shocked to learn of the confrontation and found the reports of police abuse "troubling." The mayor, along with several councilmembers, promised to investigate.

An Open Letter to the City Leaders

Berkeley resident Juty Blue (an eyewitness to the above events) sent the following Public Comment to the City Council during its October 6 meeting to discuss an evaluation of City Manager Dee Williams-Ridley:

"I am extremely disappointed that the City Manager has directed the Berkeley Police to crack down hard on peaceful protesters, especially people protesting the installation of 5G cell towers. A group of peaceful protesters were at 1321 Gilman and 1550 Hopkins early Monday morning Oct 5, in anticipation of AT&T installing dangerous and ugly cell towers on the utility poles at both locations. At 3:30am, the subcontractors, a fence rental company and a traffic control company all showed up at both sites. The protesters blocked their access to the utility poles for about 30 minutes. Then the Berkeley police showed up in force - about 10 at both sites. They surrounded the protesters. One officer said that anyone who did not want to get arrested should leave. But immediately an order went out for each police officer to grab one protester.

"Thus people were NOT given an opportunity to leave the site. Six people at 1321 Gilman were grabbed roughly and dragged some distance away or across the street. Most of these people were in their 60's and 70's. People were bruised up. One woman lost her glasses. Four or five protesters at the Hopkins site were treated in a similar manner, or even more roughly. One woman at Hopkins thought a police officer broke her arm.

"As work could not begin until 7am, there was no reason for the police to act in this fashion. One officer told one of us the order to quickly disperse the protesters came from the "City," not the Police Chief . . . . This police officer said that AT&T demanded this action from the City and would reimburse the city for its expenses. If true, this is very troubling.

"We are also angry that the City Manager is allowing this work to proceed, even though AT&T violated [Berkeley Municipal Code] BMC 16.10.040 by not notifying people within 500 feet of these utility poles before the cell tower permits were approved.

"The City Manager has never responded to the numerous letters to her from Berkeley citizens complaining that the approval of these cell towers violates the Berkeley Municipal code. The City Manager and police should be working for the town's citizens, NOT for large corporations."