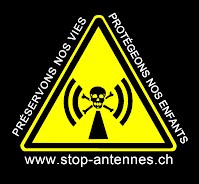 Here is a very good example of the recommendation of the Canadian Member of Parliament, Terence Young, regarding local regulation of mobile phone tower installations – from Switzerland. All parties of the Conseil général of the town of Le Landeron (canton Neuchâtel) have unanimously supported a motion to halt uncontrolled installation of mobile phone antennas everywhere on the territory of the commune.  Other communes are also in the process of establishing similar regulation on their territories.

Thursday, 25 October 2012, the « Conseil général » of Le Landeron voted in favor of a motion aimed at better planning of the installation of mobile phone antennas on its territory.

The good news comes from our colleagues at « Association Stop Antennes » (ASA). This association already made the news with its opposition to an Sunrise antenna near homes.

All members of the « Conseil général » present supported without opposition the motion which was introduced by the Canette Party. ASA thanks all the parties (Canette, UDC, Socialist, Liberal-Radical) which have unanimously supported this motion aimed at stopping uncontrolled installation of mobile phone antennas everywhere on the territory of the commune. The Federal Tribunal (TF) has already ruled that communes can implement such plans. In March 2012, the TF gave the green light (judgement 1C_449/2011 of 19 March 2012) to a plan destined to regulate installation of mobile phone antennas in various zones in the commune of Urtenen-Schönbühl in canton Berne. It rejected a request by the operators Swisscom, Orange and Sunrise which would have stopped such a plan being put in place. Other communes are also in the process of establishing similar plans on their territories. ASA encourages you to do the same.

The Association Stop Antennes does not oppose technological progress and mobile telephony. It does oppose mobile phone antennas being installed in the middle of housing estates and in disorderly fashion. No one today knows the effects of electromagnetic waves on human health. WHO has classified these as being possibly carcinogenic and the Bioinitiative Report has requested a lowering of the limit values to 0.6 V/m, which is 10 times less than the actual limits.

An operator like Swisscom installs 300 new mobile phone antennas each year in Switzerland. Mobile telephony of the 4th generation (LTE) is upon us and it will require the placement of new antennas. Perhaps today there is no antenna visible near your home but what about tomorrow? No one is protected from a neighbor or business which decides to accept to harbor a mobile phone antenna a few meters from your residence, your or your children’s bedroom, terrace, garden etc. The operators have nothing to do with your health or the esthetics of your environment… as those in Le Landeron opposed to Sunrise’s project bitterly experienced.

The question is simple: Do we want to live in an environment where antennas are omnipresent?