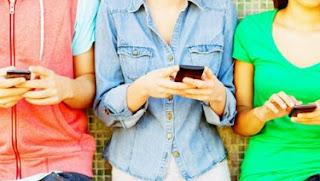 "They're not toys. They have radiation that is emitted from them and the more we can keep it off the body and use (the phone) in other ways, it will be safer," said Jennifer A. Lowry, M.D., FAACT, FAAP, chair of the AAP Council on Environmental Health Executive Committee in the AAPs press release on the NTP Study Results.

"The findings of brain tumors (gliomas) and malignant schwann cell tumors of the heart in the NTP study, as well as DNA damage in brain cells, present a major public health concern because these occurred in the same types of cells that have been reported to develop into tumors in epidemiological studies of adult cell phone users," stated Ronald L. Melnick, PhD, the National Institutes of Health toxicologist who lead the NTP study design and senior advisor to the Environmental Health Trust. "For children the cancer risks may be greater than that for adults because of greater penetration and absorption of cell phone radiation in the brains of children and because the developing nervous system of children is more susceptible to tissue-damaging agents. Based on this new information, regulatory agencies need to make strong recommendations for consumers to take precautionary measures and avoid close contact with their cell phones, and especially limit or avoid use of cell phones by children."

The AAP has updated their Healthy Children Webpage on Cell Phones entitled Cell Phone Radiation & Children's Health: What Parents Need to Know. The webpage reiterated children's unique vulnerability to cell phone radiation stating, "Another problem is that the cell phone radiation test used by the FCC is based on the devices' possible effect on large adults—not children. Children's skulls are thinner and can absorb more radiation."

Use text messaging when possible, and use cell phones in speaker mode or with the use of hands-free kits.

When talking on the cell phone, try holding it an inch or more away from your head.

Make only short or essential calls on cell phones.

Avoid carrying your phone against the body like in a pocket, sock, or bra. Cell phone manufacturers can't guarantee that the amount of radiation you're absorbing will be at a safe level.

Do not talk on the phone or text while driving. This increases the risk of automobile crashes.

Exercise caution when using a phone or texting while walking or performing other activities. "Distracted walking" injuries are also on the rise.

If you plan to watch a movie on your device, download it first, then switch to airplane mode while you watch in order to avoid unnecessary radiation exposure.

Keep an eye on your signal strength (i.e. how many bars you have). The weaker your cell signal, the harder your phone has to work and the more radiation it gives off. It's better to wait until you have a stronger signal before using your device.

Avoid making calls in cars, elevators, trains, and buses. The cell phone works harder to get a signal through metal, so the power level increases.

Remember that cell phones are not toys or teething items.

"Even though the cell phone manual contains specific instructions that say do not carry the phone next to the body, the US government does not publicize this information nor mandate companies inform the public, leaving most people unaware of potential hazards, unwittingly allowing their young children to play with them like toys," stated Devra Davis MPH, PhD, president of the Environmental Health Trust pointing to the Berkeley Cell Phone Right To Know Ordinance being challenged in court this month.

In 2012, the AAP published Pediatric Environmental Health, 3rd Edition recommending, "exposures can be reduced by encouraging children to use text messaging when possible, make only short and essential calls on cellular phones, use hands free kits and wired headsets and maintain the cellular phone an inch or more away from the head."

Since 2012, the AAP has supported the Federal Cell Phone Right to Know Legislation and has written letters to the FCC calling on the federal government to review and strengthen radiation standards for wireless devices in an effort to protect children's health.

2012 AAP Letter in Support of the Cell Phone Right to Know Act
http://ehtrust.org/wp-content/uploads/2015/12/aap_support_letter_cell_phone_right_to_know_act.pdf

About Environmental Health Trust
Environmental Health Trust is a 501 C 3 registered public charity with the Internal Revenue Service that is the only non-profit in the world that is both conducting cutting-edge basic and epidemiological research and working with policy makers, physicians, teachers and parents to educate and motivate preventive public health strategies. http://www.ehtrust.org