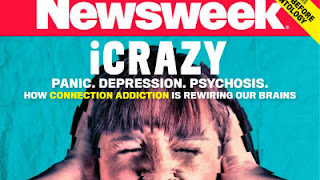 Nicholas Kardaras, author of Glow Kids, which warns of the dangers of excessive screen time by children, is petitioning the U.S. Senate and House to demand warning labels on cellphones, computers.

Psychotherapist Nicholas Kardaras, author of Glow Kids, which warns of the dangers of excessive screen time by children, is petitioning the U.S. Senate and House to demand warning labels on cellphones, computers.

Kardaras, subject of a two-page feature in the New York Post Aug. 28, authored a 1,744-word article for the Dec. 17 NYP that called for action by the Senate and House to stop the “digital madness” in elementary and other schools.The Aug. 28 story generated more than 3.3 million views, NYP said.

The petition is being publicized on the change.org website.

Kardaras quotes Dr. Andrew Dean, head of addiction research of the U.S. Navy, as saying, “I feel like there’s a war going on against our children. And it’s come so fast that we’re not even questioning it.”

Both he and Kardaras say excessive screen time is a “digital drug” that is a narcotic more powerful than morphine. Schools have become “drug dealers,” says Kardaras, who has appeared on numerous national media and has spoken to libraries in Southampton, N.Y., and Sag Harbor, where he lives with his wife and twin boys.

He has pointed to the Time magazine article that says schools have invested $60 billion in computers and other desktop electronic devices and are loathe to back away from them.

Kardaras has a B.S. in Communications from Cornell; an M.S. from Stony Brook University, New York, and a Ph.D. in Psychology from the Institute of Transpersonal Psychology, Palo Alto, Calif.. He is executive director, The Dunes, East Hampton, rehabilitation facility.

CITA, formerly the Cellular Telephone Industries Assn., which had revenues of $161 million in 2014, took Berkeley, Calif. to court after the city passed a law that made retail stores post the following sign:

“If you carry or use your phone in a pants or shirt pocket or tucked into a bra when the phone is ON and connected to a wireless network, you may exceed the federal guidelines for exposure to RF radiation.” Customers are told to read the safety regulations in the cellphone manuals.

Berkeley said it was only publicizing what is already in instructions that are provided with cellphones. A three-member panel of judges is now deciding the case.

CTIA, whose slogan is "Everything Wireless.," says that the warning misleads customers by saying that if cellphones are not used in a certain way, “they won’t be safe.” Berkeley argues that the warnings are “free speech” and only repeat what is already in cellphone instructions.

The cellphone industry spent $166 billion on cell towers and networks from 2009-14. There are 594,304 cell towers in the U.S., many of them in residential districts, according to thekillzones.com, which says they are a major health hazard. CTIA counts 242,130 towers.

Lawrence Lessig, attorney for Berkeley, says companies are discouraging governments from imposing regulations by filing expensive First Amendment lawsuits. He says governments have a right to publicize warnings that are in the manufacturers’ own materials.

Berkeley says it is the only town in the U.S. attempting to order stores to post warnings on cellphones.

Radiation health advocates note that no library in the U.S. carries such warnings, apparently because they fear legal action by CITA and its allies. There are no such warnings in libraries and schools in Southampton, Hampton Bays, Quogue or Westhampton, which are visited often by this writer.