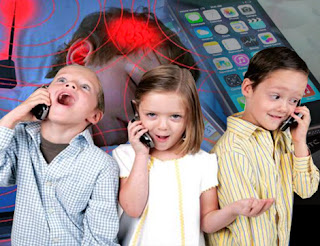 Everyone should view this presentation of the partial results of the National Toxicology Program study prepared by Dr. Linda Birnbaum, Director of NIEHS, and delivered by Ronald Melnick PhD, retired NIH scientist who helped design the NIEHS study. This is from the 2017 Expert Forum on Wireless and Health at the Hebrew University, Jerusalem, 24-27 January 2017.

For years, scientists have been warning that pollution from electro- magnetic frequencies emitted by cell phones and WiFi “likely cause” brain and heart cancers in test animals, but no one is listening. Even worse, as technology spreads around the world, no one is working on ways to help minimize exposure to these types of toxic EMF waves.

Far-sighted health advocates have warned about the dangers of electromagnetic frequency (EMF) pollution, broadly including power lines, cellular phone towers, and cellular and cordless telephones, for a long time. New technologies such as Wi-Fi and “smart meters” bring EMF closer to us—in our homes, workplaces, and many public spaces. They also make communication towers more prolific, which intensifies the problem.

A recent study on cellular telephone dangers and proposed action by the Federal Communications Commission (FCC) went virtually under the radar.

The study by the National Toxicology Program (NTP) under the National Institutes of Health, done in Sweden, reported on May 31 that cell phone exposure within currently available safety limits was the “likely cause” of brain and heart cancers in test animals.

This result is especially significant because scientists do not often find causation. Instead, erring on the side of caution, they typically call for more and more studies.

However, this is one time when scientists were clear. Dr. Christopher Portier, formerly with the NTP, was quoted by the BioInitiative organization, a group of independent scientists dedicated to publishing and reporting on the possible risks from wireless technologies and electromagnetic fields, as saying:

“I would call it a causative study, absolutely. They controlled everything in the study. It’s [the cancer] because of the exposure. This is by far—far and away—the most carefully done cellphone bioassay, a biological assessment. This is a classic study that is done for trying to understand cancers in humans.”

The cellular telephone link to cancer is controversial, with industry scientists denying any link and other scientists pointing out dangers.

Dr. Lennart Hardell, M.D. and Ph.D. of Orebro University in Sweden, stated: “(T)he animal study confirms our findings in epidemiological studies of an increased risk for glioma and acoustic neuroma among people that use wireless phones, both cell phones and cordless phones (DECT).

Acoustic neuroma is a type of Schwannoma, so interestingly this study confirms findings in humans of increased risk for glioma and acoustic neuroma. In 2013 we called for upgrading the risk in humans to Group 1, [meaning] the agent is carcinogenic to humans. It is now time to re-evaluate both the cancer risk and other potential health effects in humans from radiofrequency radiation and also inform the public.

This NTP evidence is greatly strengthening the evidence of risk, is sufficient to reclassify cellphone radiation as a known cancer-causing agent, and confirms the inadequacy of existing public safety limits.”

As alarming as the study and commentary are, there’s more bad news: The FCC is seeking to make it easier to install more “small cell” wireless antenna sites by “streamlining the permitting process.”

If you want to complain based on safety grounds to your local representatives that these wireless antenna sites shouldn’t be permitted near your home, business, school, or public space, you should remember that the 1996 Telecommunications Act gave the FCC exclusive jurisdiction to determine “safe” limits, preempting any local bodies from examining questions of health.

The BioInitiative organization has submitted a paper opposing the FCC’s proposal, signed by Cindy Sage, M.A., Lennart Hardell, M.D., Ph.D., and David O. Carpenter, M.D. They argue: “Health consequences have not been identified nor been factored into public safety limits. This is particularly true for the new 5G wireless technologies using millimeter wave frequencies (~28 GHz to ~71 GHz) that will be transmitted by small cells in the future.

Adey (1993) warns: ‘Biomolecular and cell research in this spectral region has been meager. There may be special significance to biomolecular interactions with millimeter wave EM fields. At frequencies within the range 10-1,000 GHz, resonant vibrational or rotational interactions, not seen at lower frequencies, may occur with molecules or portions of molecules.’”

Sage, Hardell, and Carpenter note the FCC has not actually studied the safety of “non-thermal, low-intensity effects of chronic exposure to 900 MHz to the low GHz frequencies. . . . There is no basis for the FCC to make a positive assertion of safety of existing RF levels to which the public is perpetually exposed. Certainly unaddressed health concerns should stop the FCC from expediting new wireless technologies facilitating new small cell siting and satellite RF sources.

The existing FCC public safety limits are grossly inadequate to protect public health from the body burden of the existing proliferation of RF-emitting devices and the wireless infrastructure supporting them, let alone from new RF sources that will make the situation worse for public health. There is a broad consensus that new, biologically based public safety limits for chronic exposure are warranted, given the scientific and public health evidence for health risks from low-intensity radiofrequency radiation exposures from wireless technology applications.”

Few would like to return to a pre-technological world, but, clearly, there is a need to know the actual risks of electromagnetic pollution and take measures to minimize harm.