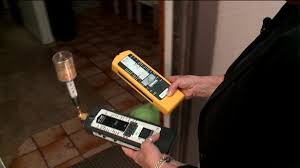 WGN News recently reported on a group of people who say they are allergic to Wi-Fi. Their symptoms were so bad, they upped and moved from all over the country to a small town in West Virginia.

But here in the Chicago area, some people who claim they too are allergic to Wi-Fi are determined to stay put.

One woman is helping find ways for them to live in their homes rather than leave them.

Barbara Bobbitt has made a business out of helping a group of "sensitives.” But she makes it clear: She is not a psychologist nor is she is an MD. She calls herself a "building biologist" who evaluates people's homes to see if anything inside could be making them sick.

“When I started this business 10 years ago, I would say 95% of my business was for indoor air quality,” she says. “Now I would say 98% of my calls are for electromagnetic radiation.”

It is also known as EMR. Bobbitt doesn't suffer from it herself. But she helps people who do live among society surrounded by electromagnetic frequencies they can't see, but ones they say they feel constantly.

People like Gale Dyskie of Darien, who says for eight years, she has had the sensation of burning skin, headaches and more.

She believes the pain is brought on by society's every day devices like refrigerators, televisions, cell phones, cordless phones and WI-Fi, even smart meters attached homes.

Dyskie has unplugged them all and has a sign on her front door warning to visitors.

Her goal is to stay in her home of 30 years.

“It's the only way I can survive right now," Dyskie says. “I’m under constant threat.”

This is where Bobbitt enters the picture.

She says she has probably served 100 clients in the past decade using these fancy meters and some sound advice. If EMR is the enemy in your house, Bobbit walks through it with her equipment-reading what she would call unhealthy microwave energy for $125 an hour. During this she roots out good spots, bad spots and showing clients how to reduce exposure to EMR.

Some of her tips include turning off your Wi-Fi at night. Try it for a couple of weeks and "see if you're not calmer. See if your children are not more calm,” Bobbit says.

Also, she says get rid of all cordless phones and make them land lines. Don't sleep with iPads, cell phones or other electronic devices in your bedroom at night.

Bobbit also suggests to hardwire your computer and printer and don't use a microwave.

With the dawn of smart meters, Bobbitt says business is booming. Some of her clients are wrapping theirs (and their neighbors) in smart meter guards for about $130.

Others are draping their beds, windows and other parts of their homes in steel mesh to deflect EMF. Paint made with shielding qualities is also an option to avoid any one of the dozens and dozens of symptoms.

Dyskie's is case so extreme, so far the only solution working for her is avoidance.

"I’m trying to find a way to survive here. But it's very difficult,” she says. “Every day I’m in some degree of pain. I try to work through it, but at some point I’m not sure I’ll be able to tolerate it anymore."

Technology is advancing and Dyskie's symptoms are growing. Leaving the area, may be her only option left.

Bobbitt says her greatest worry is kids today. Wireless baby monitors and gaming devices, she says, are giving off tremendous amounts of EMR. She also says schools often have antennas on top of them and teachers are using smart boards. Wi-Fi is available at almost every turn. "Being connected" these days is not the answer for "sensitives" trying to live a normal life, symptom free.