2017: US Gov’t Scientists – Health Effects from Interaction of Wireless Radiation and Other Environmental Agents 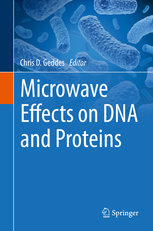 "Government standards are based on the effect of non-ionizing radiation acting alone. The effects of the radiation in combination with other agents on biological systems would be much more severe than if it was acting alone ."

2017: US Gov’t Scientists – Health Effects from Interaction of Wireless Radiation and Other Environmental Agents

A book was published in 2017, Microwave Effects on DNA and Proteins

Chapter 4 (pp. 97-158) of that book is about health effects resulting from interaction of wireless radiation exposure with other environmental agents by Kostoff, R.N. and Clifford G.Y. Lau. 2017. “Modified health effects of non-ionizing electromagnetic radiation combined with other agents reported in the biomedical literature.”


They bring up an important point – that government standards are based on the effect of non-ionizing radiation acting alone. The effects of the radiation in combination with other agents on biological systems would be much more severe than if it was acting alone (p.98)

“Non-ionizing radiation can create transient pores in the cell membrane. This can be used to assist in delivering chemotherapy agents into the cell, however, it can also allow an infectious virus to enter the central nervous system. “(p. 111)

The interactions between non-ionizing radiation and the environmental agent occur only in specific windows for specific combinations of multiple variables (p. 130)
At the end, p. 143, it explains why research showing adverse effects is underreported (government and industry influences).

Also that one’s genetics or preexisting disease is a factor in one’s susceptibility to EMR’s effects on promoting disease. (p.112) (this can explain why some people experience adverse health effects around wireless radiation while others don’t)

The authors are both research scientists, formerly employed with the Office of Naval Research.

Clifford Lau is currently a research scientist at the The Institute for Defense Analyses. IDA is a non-profit corporation that administers three federally funded research and development centers to assist the United States Government in addressing important national security issues, particularly those requiring scientific and technical expertise. IDA only works for the government.
Read more about the Institute here https://www.ida.org/

Ronald Neil Kostoff Bio https://ehtrust.org/book-chapter-modified-health-effects-non-ionizing-emf-combined-agents-kostoff-lau/
Ronald Neil Kostoff received a Ph.D. in Aerospace and Mechanical Sciences from Princeton University in 1967. He has worked for Bell Laboratories, Department of Energy, Office of Naval Research, and MITRE Corp. As ONR’s Director of Technical Assessment, he managed the selection, resource allocation, and review of Accelerated Research Initiatives, funding-enhanced multi-disciplinary programs that constituted about 40% of ONR’s budget.

He has published over 200 peer-reviewed articles, served as Guest Editor of four journal Special Issues since 1994, obtained two text mining system patents, and is presently a Research Affiliate at Georgia Institute of Technology. He has published on numerous medical topics in the peer-reviewed literature, focusing initially on discovery of treatments for chronic diseases, and more recently on identifying and eliminating the myriad contributing factors to these diseases.

His 2015 book, Pervasive Causes of Disease, identified numerous factors that contributed to myriad diseases, and questioned whether the non-communicable diseases that dominate the healthcare debate today can be reversed/prevented without eliminating these major pervasive factors. Many of these major pervasive factors result from modern technology advances being implemented without adequate regulation and safety testing.