Do You Really Believe Your Cell Phone (i.e. Microwave Transceiver) Is NOT Harming Your Health?

Do You Really Believe Your Cell Phone (i.e. Microwave Transceiver) Is NOT Harming Your Health?
by Paul Doyon, electromagneticsafeplanet.com, 12 October 2017 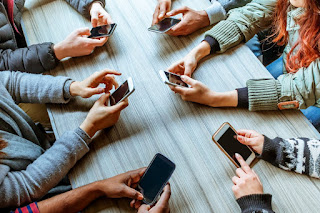 Wherever we go nowadays — in restaurants, cafes, shopping malls, on public transportation, on the street, in their cars, and even on T.V. — we see people engaged, often obsessively, with their wireless devices.

These devices that have made our lives so convenient have, to say the least, indeed also drastically changed our lifestyles, how we interact with each other, and how we behave in public. So if everyone is so utterly engrossed with his or her individual wireless devices without any seemingly overt problems, shouldn’t we not just chalk it up to normal behavior of the modern 21st century? And since our governmental organizations have seamlessly approved the use of these wireless devices, then they must also be safe, right? Well, hold your horses on those two beliefs, as it may very well be way too early to jump the gun on either of these particular conclusions.

After all, fifty years ago, it was quite common — and “normal” — to see people smoking cigarettes in all the places where it is perfectly acceptable for people to be using their wireless devices today. Nowadays, most people would throw a fit if someone invaded their space with second-hand cigarette smoke, but seemingly don’t think twice if someone invades their space with what might be regarded as second-hand electromagnetic radiation.

What Is Officialdom Telling Us?

While there is a lot of contradictory information out there about whether the electromagnetic fields (EMFs) emitted by our wireless devices are actually harmful or not, for years now officialdom has been giving us the impression that they have been in fact safe.

For example, the FDA presently states on its website that

“The majority of studies published have failed to show an association between exposure to radiofrequency from a cell phone and health problems.” [1]

And the Federal Communications Commission (FCC) also states that

“There is no scientific evidence that proves that wireless phone usage can lead to cancer or a variety of other problems, including headaches, dizziness or memory loss.” [1]

The Centers for Disease Control and Prevention (CDC) further states that

“At this time we do not have the science to link health problems to cell phone use.” [1]

And according to the National Institute of Environmental Health Sciences (NIEHS),

“Current scientific evidence has not conclusively linked cell phone use with any adverse health problems, but more research is needed.” [1]

Finally, even the National Cancer Institute (NCI) tells us that

“Studies thus far have not shown a consistent link between cell phone use and cancers of the brain, nerves, or other tissues of the head or neck.” [1]

Is History Repeating Itself?

We can find similar statements from the 1950s and 1960s by officials regarding cigarette smoking as we are hearing today from officials with regards to wireless radiation. For example, The New York Times published, on April 14, 1954, a number of quotations — made public by the Tobacco Industry Research Committee — by a number of distinguished cancer authorities, all of them denying there was a link between smoking and lung cancer. For instance, Dr. R.H. Rigdon, Director of Laboratory of Experimental Pathology at the University of Texas, stated that

“In our opinion the data available today do not justify the conclusions that the increase in the frequency of cancer of the lung is the result of cigarette smoking.” [2]

“If excessive smoking actually plays a role in the production of lung cancer, it seems to be a minor one, if judged by the evidence on hand.” [2]

“I feel strongly that the blanket statements which appeared in the press that there is a direct and causative relationship between smoking and cigarettes, and the number of cigarettes smoked, to cancer of the lung is an absolutely unwarranted conclusion.” [2]

“It is my conviction that nicotine is a very remarkable, beneficent drug that both helps the body to resist external stress and can as a result show a pronounced tranquillizing effect.” [3]

And then Dr. Ian MacDonald, a Los Angeles surgeon is quoted in Newsweek (November 18, 1963) declared that

“For the majority of people, smoking has a beneficial effect.” [4]

And we mustn’t forget about the West German drug thalidomide, which caused terrible birth defects in the babies of women — throughout the world in the late 1950s and early 1960s — who had taken it primarily as anti-nausea medication for morning sickness while pregnant (and now, ironically, being used as a chemotherapy drug for multiple myeloma, a form of immune cell cancer). At the time, it was not believed that pharmaceuticals taken by pregnant women could pass through the placenta barrier and cause harm to a developing fetus — probably in the same way that many misguidedly believe that “non-ionizing radiation” is harmless today.

For example, it was stated by a William S. Merrell pharmaceutical company executive on October 25, 1960, at a special conference held to present its introductory marketing plan for thalidomide to its sales force that

“We have firmly established the safety, dosage and usefulness of Kevadon [brand name for thalidomide] by both foreign and U.S. laboratory and clinical studies.” [5]

Further, it was written in a letter to the FDA by a physician participating in the “clinical investigation” program for the new sleeping pill that Kevadon [thalidomide] was

German philosopher Friedrich Hegel was correct when he stated that