The Lancy Medical Center includes seven physicians specializing in internal medicine, 21 psychiatrists/psychologists, one specialist in obstetrics/gynecology, and a number of therapists (https://cmlancy.ch/).

Recently opened, the Center did not have Wi-Fi in the second-floor waiting room (internal medicine) up until now. The personnel at the reception, including a number of young women, are being saturated with electrosmog (cordless phones, Wi-Fi, smartphones…). On several occasions, I talked to my doctor who is director of internal medicine at the Center, and to the personnel about this.

Denial of the risks of radiation for health is a sign of unhealthy collusion among the medical personnel. Almost no physician in Geneva has the courage to admit there is a risk. Do they know better than the 246 scientists from 41 countries who signed the International Appeal requesting effective protection against exposure to electromagnetic waves?

I ask myself, how can I consult a physician who denies the risks? We cannot find doctors in Geneva who would be able to help persons who are sensitive to RF radiation, let alone recognize that waves affect health.

And so, I am writing this letter in the hopes that a few doctors and other healthcare personnel would read it and help us persons who are neglected, rejected, and even ill-treated.

I am a patient of one of the doctors in the Lancy Medical Center. For several months, there was no Wi-Fi in the second-floor waiting room of the Center. The reception area, however, is saturated with radiofrequency radiation and I was concerned about the personnel who work there. I advised them to speak to their “director” in order to protect them from the radiation (wired solutions).

Imagine my disappointment when during a recent medical visit, I found rather strong Wi-Fi in the waiting room! I am sensitive to Wi-Fi, which creates pressure in the head.

Wi-Fi has no place on health premises. Exposure to radiofrequency radiation from wireless technology, including Wi-Fi, classified by the International Agency for Research on Cancer as category 2B, “possibly carcinogenic”, can be harmful, especially for persons who are unwell, those sensitive to this technology (electrohypersensitive persons, comprising at least 5% of the population) and particularly, children and pregnant women. Well-known scientists, independent of industry, are asking for a reclassification of this radiation to Group 1 – carcinogenic to humans.

In September 2017, the scientists responsible for the $25 million U.S. National Toxicology Program study on rats and mice exposed to radiation from cell phones concluded that “exposure to radiofrequency radiation could induce measurable damage to DNA under certain conditions of exposure”.

Wi-Fi should not be installed, either in medical offices or waiting rooms as an amenity for patients. In Geneva, certain health centers such as the Geneva Cancer League (Médiane) and some doctors’ offices respect application of the precautionary principle by banning Wi-Fi from the premises.

Moreover, it should be the responsibility of physicians to inform themselves about the risks of wireless technology and to educate their patients, especially those who are most vulnerable, parents of children and pregnant women, about the impact of radiation on the fœtus and the development and behavior of children.

In all cases, doctors, especially pediatricians, should at least inform parents about the use of babyphones, smartphones and tablets, recommending precautionary measures regarding safer use of this technology. The use of mobile phones by very young children will generate, during the course of their lives, a greater accumulation of electromagnetic radiation effects than that of adults. This could significantly increase the risk of their developing brain tumors and/or an intolerance to electromagnetic waves and other health disorders.

WLAN/Wi-Fi:
- Only switch your WLAN on when you need it. With laptops, in particular, it is a good idea to switch the WLAN off as otherwise the device will repeatedly try to connect to a network, leading to unnecessary radiation and a shorter battery life.
- Don’t hold your laptop close to your body while it is connected to a WLAN

Mobile phones
- Use headphones or a wireless head set with a weak Bluetooth transmitter (power class 2 or 3) in order to reduce radiation to the head.

With regard to mobile phones : The standards relating to RF radiation were established many years ago and are not realistic. They apply to an adult 200-pound male, not to children who are developing, and are thus more vulnerable to and absorb more radiation than adults. Concerning the European Union standards (SAR values), which also apply to Switzerland, it has been found that many cell phones emit more radiation than the manufacturers are declaring. Most mobile phone tests by manufacturers are conducted at a certain distance from the body (between 15 to 25 mm). Recently, the SAR measurement has been the subject of a more severe European regulation. The new official standard should be inferior to 2W/kg at 5 mm distance. It is this level which makes certain models, including the iPhone 5 and Samsung Galaxy 5S non-marketable in France, and, one hopes, soon in Switzerland.

Thus, when tested in contact with the skin, for example, against the ear or trunk, in a pocket or bra, the phones emit radiation levels which exceed the standards. A cell phone should therefore never be used or kept directly in contact with the body. All mobile phone manuals contain this warning, but a large number of users ignore it or are unaware.


Please do not hesitate to contact us for more information.

Thank you for your attention,

ARA member
Association Romande Alerte, whose purpose is to raise awareness of the population of the risks of wireless technology.
www.alerte.ch

Switzerland: Note Issued by the Child and Youth Health Service of Geneva on the Health Risks of Use of Digital Technology (available in French)
https://ehtrust.org/letter-health-risks-digital-technology-issued-child-youth-health-service-geneva-switzerland/

Scientific studies on the effects of Wi-Fi (Physicians for Safer Technology):
https://mdsafetech.org/wi-fi-effects/

Table of 42 mobile phones with highest SAR trunk values in contact (at end of article)
https://www.nextinpact.com/news/105394-ondes-emises-par-smartphones-a-decouverte-mesures-das-par-anfr.htm 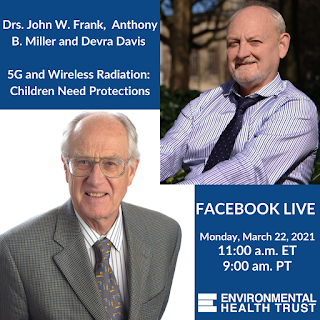