The Mysterious Illness That Makes Women Allergic to The Modern World


Multiple chemical sensitivity is a relatively unknown condition that makes its (mostly female) sufferers debilitatingly sensitive to common substances like smoke, perfume, and cleaning products.  Why is it barely recognized by the medical community? 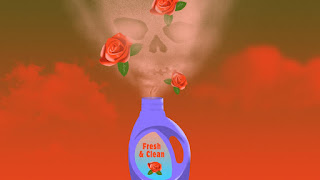 Nicole Parisi had just moved to LA when she was first diagnosed with Multiple Chemical Sensitivity syndrome. As an artist, she had spent years coming into contact with harsh chemicals—regularly using paints, inks, and solvents for her screen print projects. Each time she handled them, though, she would notice a range of subtle bodily reactions.

These reactions got steadily more intense over a 20-year period. Friends' perfumes began to burn her eyes, bringing on searing headaches and dizzy spells. Vinyl ink and screen cleaners—products she used regularly for her art—started to clog her throat, leaving her wheezing and struggling to breathe.

One afternoon in 2003, Parisi passed out in her apartment building's laundry room. She'd inhaled a strong, flowery scent that overwhelmed her. The smell left her gasping, dizzy, and consumed by an instant and crushing headache.

But she hadn't smelled anything unusual or remarkable. The smell that overwhelmed her was simply the scent of standard laundry detergent. Life, she claims, hasn't been the same since.

"Since that day when I got knocked out from laundry fumes, every synthetic fragrance and most solvents [and] most paints, plastics, and exhaust makes me sick," she says. "I have difficulty breathing, seeing, speaking, thinking, walking, and I get terrible headaches lasting from two to 12 hours. Passing out and sleeping is the only remedy."

Parisi's story is no anomaly. Multiple chemical sensitivity—otherwise known as MCS or environmental illness (EI)—is one of the most mysterious health syndromes out there. Sufferers, up to 80 percent of whom are women, struggle with debilitating sensitivities to their surrounding environment, particularly when exposed to smoke, perfume, and cleaning products. (The exact chemicals that trigger these reactions vary, and depend on the person.) Essentially, sufferers of MCS become allergic to the modern world.

The syndrome appears to be prevalent in the US, where research suggests that between 12.6 percent and 15.9 percent of the population experiences some kind of "heightened sensitivity" to modern chemicals, with women being more susceptible. But information about its background and causes are rare. We know the common symptoms of MCS: confusion, cognitive dysfunction, asthma-type symptoms, rhinitis (inflammation of the nose), sleep disturbances, fatigue, anxiety, depression, according to one 2009 paper. But very little is known about what causes MCS, or why it's more common in women.

Dr. Martin L. Pall, who has studied MCS extensively, thinks the answer lies in female hormones. "The best evidence on this gender ratio comes not from studies of MCS, but rather studies of the related disease, chronic fatigue syndrome (CFS)," he explains. "In CFS, sufferers who were diagnosed before puberty, the gender ratio is close to 1:1. In sufferers diagnosed after puberty, the ratio is close to four females: one male. That argues for a hormonal effect."

In the US, some sufferers have struggled so much with these symptoms that they've even resorted to breaking away from society altogether—starting up their own 25-mile square safe space in Navajo County, Arizona. A community of around 30 people, the aptly-titled Snowflake is a haven free from fragrances, chemicals, electricity, and WiFi—of all which the sufferers believe may compound their MCS.

The self-enforced isolation makes sense to sufferers. The symptoms of MCS are destructive and all-consuming. Parisi mentions extreme loneliness and lost work opportunities as a side effect of her condition. "[I've been] trapped by and disabled by MCS," she says. "The biggest struggles have been not being able to make any money to live and work effectively, and being alone all the time."

Sherrie Powers, 41, tells a similar story. "I stay home," she explains. "My husband grocery shops. My daughter does most of cleaning around the house without chemicals. I stay away from family and friends, and keep to myself. If I'm outside and smell laundry, I have to move inside quickly so as to avoid getting ill."

Both Powers and Parisi lament the lack of support that's been made available to them, as well as the length of time it took to receive their diagnosis. (They had to wait years before receiving any diagnosis, and that was only after traveling to environmental medicine specialists well outside of their states.) "I'm not aware of any support system for people with MCS," Parisi adds. "Many people think it is a neurosis, hypochondria, or weakness."

As it currently stands, MCS is not officially recognized as an illness by either the World Health Organization or the American Medical Association, and it is discussed only sporadically in toxicological literature. There is also a dismissive air to most of the dialogue that surrounds the syndrome. MCS is introduced on Wikipedia as a "disputed" condition, with "vague" symptoms that may be "psychosomatic." Support pages or charities for sufferers are also almost non-existent (there's only one charity currently registered in the UK, and one in the US).

These kinds of attitudes aren't helped by the results of some clinical trials, which suggest that some MCS sufferers can react as strongly to placebos as they do to actual chemical exposure. But Dr. Pall warns that it would be dangerous to take them as definitive proof that the condition doesn't exist. In fact, he argues that these kind of studies only show how much more researchers have left to explore.

"There have been a whole series of papers published arguing that MCS is not a physiological illness but is, rather, what has become known as psychogenic [rooted in psychology]," Dr. Pall wrote in a 2009 study. "However, they have failed to provide evidence that there cannot be a physiological explanation for MCS."

These psychogenic advocates tend to dismiss the syndrome as "somatoform"—a mental illness which causes physical symptoms, but has no physiological explanation. In an effort to support this theory, one 1994 paper claimed that MCS sufferers were more likely to have "markedly abnormal" personality profiles, tying them to "psychoneurotic problems" like hysteria and depression.

"There is still the psychogenic school making their claims by ignoring all of the hardest science," Dr. Pall tells me today. "There has also been some useful, important genetic studies published that continue to show it is not psychogenic."

It's easy to be cynical about the lack of research around the condition, particularly when you consider the clear gender imbalance amongst MCS sufferers. After all, this is for the most part a women's disease, and could help explain why the condition is ignored by the mainstream medical community. We know that women are regularly taken less seriously by doctors and healthcare professionals (women, for example, wait an average of 16 minutes longer than men in emergency rooms, and are more likely to be prescribed less pain-relieving medication.)

Could MCS—a condition with clear, life-altering symptoms for its sufferers—be overlooked for these same reasons? Are sufferers being neglected for their sex rather than their symptoms?

"I do think there is a gender bias which has made it easier for the psychogenic claimants to essentially write off all of these conditions that are majority female," Dr. Pall affirms. "I think you are likely to be correct."

Gary Patera, author of the self-help book Healing Severe Chemical and EMF Sensitivity, also believes this to be the case. After his wife was diagnosed with the MCS last year, he's been raising awareness around the condition, urging medical professionals to take it, and the women who suffer from it, more seriously.

"It would take hours to convey the depth of the heartbreaking consequences of those who have more severe MCS," he tells me. "The loss of jobs and all income, the loss of friends, family members who think they are mentally disturbed, no hope for a cure, doctors who suggest this is mostly in their heads, [having] no safe place to live or sleep."

Instead, he urges people to find whatever communities they can, to stay positive, and to keep fighting for the condition to get official recognition. "I have posts online and many personal letters written by those who are almost ready to give up trying to live because it is too hard," he adds. "With MCS, life anywhere, except perhaps in some ideal remote location, is almost unbearable."

While there are a few passionate supporters who believe in the syndrome, it's still not enough for sufferers like Parisi and Powers. Lacking any valid support or adequate treatment, it will be a long time before they can truly make the most of their lives again.

"The information is out there to justify but no organization is actively advocating," says Powers, with an air of resignation. "There's still no disability services for protection at jobs, or in public places. The support system is non-existent."

Email ThisBlogThis!Share to TwitterShare to FacebookShare to Pinterest
Libellés : MCS