France: A Doctor from EDF (Electricité de France) Accuses Professor Belpomme before the Order of Physicians

(Our comment):  Professor Olle Johansson, who was also undertaking invaluable research on electrohypersentivity, was recently forced to "retire" from the Karolinska Institute in Sweden.  Now, the French Order of Physicians is pursuing Professor Dominique Belpomme, president of the Association for Research on Treatment against Cancer (ARTAC) and of the European Cancer Environment Research Institute (ECERI) in Brussels for his diagnostic methods regarding electrohypersensitivity.

A doctor from EDF (Electricité de France) accuses Professor Belpomme before the Order of Physicians.  He is too brilliant, and outshines them...
stoplinky76320.wordpress.com, 20 December 2017 - Extract (translation) 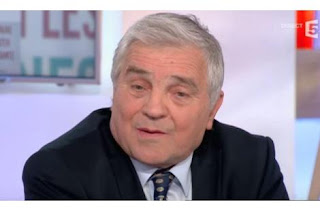 A physician pursued by the Order for his diagnostic methods for electrohypersensitivity. Professor Dominique Belpomme, Parisian cancer specialist, who is fighting for the recognition of electrohypersensitivy (EHS) as a pathology, is being targeted by a disciplinary procedure of the [French] Order of Physicians (CNOM).  Enedis [French electricity network] is talking to us about "green beans, pickled vegetables" and psychology.  That says a lot about their standards.

The National Council of the Order of Physicians has lodged an accusation against the doctor before the disciplinary chamber of first instance of Ile-de-France for two reasons related to his activities regarding diagnosis of electrohypersensitivity.  This information revealed by the Medical Press Agency (APM) has been confirmed by the Generalist Order.

The former head of the medical oncology unit at the Boucicaut Hospital and founder and president of the Association for Research on Treatment against Cancer (ARTAC), affirmed in a study to have found the criteria allowing diagnosis of this syndrome which is not recognized as such by the [French] National Agency for Food, Environmental and Occupational Health and Safety (ANSES).  We add:  the reason being:  the "experts" are recruited from the laboratories, EDF, and that harms their share-holders and their share of the market.

During a weekly consultation at the Alleray-Labrouste Clinic in Paris, the physician delivers medical certificates confirming a "syndrome of intolerance to electromagnetic fields (SICEM)".  The Director of the medical study service of EDF alerted the Order because many clients were presenting certificates from Prof. Belpomme to contest installation of the new smart meter Linky.  These certificates were drawn up according to the same model and terms, with only the names changing.  The CNOM reproaches Prof. Belpomme for an "absence of individualization of diagnosis and of taking into account the personality of each patient".  We add: the reason being: the EDF doctor works for EDF and for Bouygues (telecoms operator).  He isn't going to risk losing his salary!

The other reason for the accusation concerns one of the diagnostic examinations made by Prof. Belpomme: "the encephaloscan".  This ultrasound examination, rightly used to identify electrosensitivity, has never been the subject of a scientific publication and is not part of the codification.  Prof. Belpomme is being reproached for having sent his patients to the only imagery office in Paris which carries out this examination, billed at 250 euros, cost not reimbursed, says the APM.  It is the Directorate General for Health which alerted the Order regarding this point.  This time, the accusation concerns the provisions of the code of ethics imposed on a physician "to formulate his diagnosis with care and to give a patient conscientious care based on scientific data and to prohibit all recourse to an illusory or insufficiently proven procedure".  We add: it is very regrettable that the only person who has addressed the issue in France is, moreover, contested by "the Order" because that is harming the large conglomerates too much.

At the present time, all these doctors have no idea what an atom is, around which spin electrons and that naturally, positive or negative ions are acting biologically on the cell, thus modifying metabolism.

These are basic concepts.  And they experience no shame in denying this function.