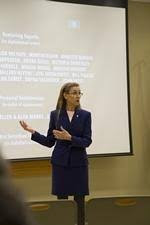 SHREWSBURY --- The general public is aware of the well documented dangers of tobacco products, drugs, and alcohol, but what about cell phones? That was the central question at the screening and discussion of the documentary, “Generation Zapped,” at the Shrewsbury Public Library on Thursday, December 7. The event was held by Wireless Education, a non-profit dedicated to providing information to parents and consumers so they can make conscious decisions about how they use WiFi technology.

The event was led by Wireless Education Communications Director Cece Doucette. Before taking on her current role, Doucette was the president of the Ashland Education Foundation as well as a grant coordinator for Ashland Public Schools.

“I personally ran seven campaigns to get technology into our schools,” said Doucette.

Through independent research, Doucette learned of a number of studies around the world that contradicted FCC assurances that the radiation associated with our daily-use devices was at safe levels. Since then, she has pushed for awareness.

“Not one single person at our schools knew,” said Doucette. She added that awareness was similarly low at the local and state levels of government.

“Generation Zapped” was directed by Iranian born Sabine El Gemayel. Following a tumultuous youth that saw both the Persian Revolution and the Lebanese Civil War, El Gemayel moved to Los Angeles where she became a filmmaker. According to the film’s website, it is El Gemayel’s mission “to expose the Truth about the effects of cell phones radiations [sic] and wireless technologies on children’s health.”

The film explores the impact that radiation associated with modern devices such as cellphones and wireless routers, called RF waves, can have on the human body.

The film followed multiple people who were impacted by cancers that they claimed to be related to cell phone use. When Ellen Marks learned that her husband, a heavy cell phone user, had a brain tumor in the area where he held his phone to his head, she pushed for people to become more aware of the possible dangers of cell phone use.

She argued that the FCC can not be trusted in regards to their cell phone safety assurances because they have intermingled too much with the telecommunications industry. Former FCC Chairman Thomas Wheeler, for example, previously served as president of the Cellular Telecommunications and Internet Association (CTIA), a trade group that represents the wireless communication industry.

It was noted in the film that other countries have started to take a closer look at the dangers of RF waves. For example, in 2015 France pulled WiFi out of all nursery schools and required elementary schools to turn off WiFi when not in use.

After the film, Doucette discussed ways to make your home safer. She suggested using a wired internet connection or turning WiFi off when not in use. She also said that she keeps her cell phone in airplane mode for most of the day and advocated for the use of speakerphone to keep some cell phones further from your head.

Those in attendance expressed concern regarding the ever growing presence of RF waves and the importance to think about the possible impact that can have on health.

“I think it’s an incredibly important topic for people to talk about and start thinking about,” said attendee Melissa McBride.

The film will be re-screened at 7 p.m. Wed. January 17 at the Westborough Public Library.