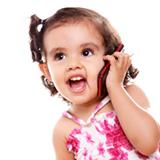 Washington, DC—In the final days of the holiday shopping season, environmental health and safety experts are warning parents against buying their children smartphones or Wi-Fi enabled toys, noting that they could pose serious health and safety risks according to experts. Today, Environmental Health Trust (EHT) issued an emergency holiday alert, urging parents and grandparents not to buy their children so-called “smart” phones or watches or other wireless toys as holiday gifts and to limit children’s exposures to these devices. Last week, the California Department of Public Health (CDPH) advised reducing exposures to the microwave radiation also called radio frequency energy from cell phones—noting the special risks to young children.

“Parents are often unaware that these child-friendly devices are basically two-way microwave radios, and children are much more vulnerable to the health risks of this radiation,” said Devra Davis PhD, MPH, founder and President of Environmental Health Trust. Davis continued, “The scientific evidence is now clear and compelling. We need to give our children toys and tools to grow and learn, not toys and tools which could harm them.”

“I spent my whole career in the technology sector. I’ve seen some tremendous benefits. I’ve also seen if not used properly technology can be harmful. I believe the way we deploy wireless devices today is harmful,” said Frank Clegg, former President of Microsoft Canada and CEO of Canadians For Safe Technology. “Taiwan, our NATO allies in France, Belgium, Italy—they are all doing a much better job of regulating devices and protecting children.”

Since 2011, numerous studies have linked cell phone radiation to cancer and other health problems, causing long-time advisors to the World Health Organization’s International Agency for Research on Cancer (WHO/IARC) to argue that this radiation should be regarded as a human carcinogen causing glioma—the same type of brain cancer that affected Senators Ted Kennedy and John McCain. The landmark $25 million U.S. NIH/NIEHS National Toxicology Program study found long-term that daily exposure to cell phone radiation led to cancers of the brain and heart nerve sheath in male rats, as well as DNA damage in brain cells of exposed animals.

Ronald Melnick PhD, formerly the Senior NIH toxicologist who led the design of the National Toxicology Program study and a Senior Advisor to EHT, said, “THE NTP study was designed to see if there can be any adverse health effects from exposure to cell phone radiation. Results from that study showed that rats developed tumors, gliomas (brain tumors) and malignant schwannomas of the heart. In addition, there was DNA damage in brain cells of exposed animals. This was concerning because studies in humans also found increases of the same types of cancers among cell phone users. In my view, this should raise public health concerns to a much higher level than exists now.”

EXAMPLES OF HOLIDAY TOYS THAT COME WITH MICROWAVE RADIATION INCLUDE:

Smartwatches: The Apple Watch carries a fine print warning that the user keep a distance of 1 cm from the antenna, while the same device is touted as “wearable.” But what parent gives their kid an Apple Watch and tells them not to rest their head on their arms— as that would create body contact with the watch?

Virtual Reality headsets often require the user to strap a phone in front of their face, placing a radiation emitting device close to the eyes.

Wi-Fi and cell phone connected dolls use Wi-Fi and speech recognition technology to engage in two-way dialogue, but because that function requires a wireless Internet connection, your child’s new friend is also a microwave-emitting radio device that can save and send information back to the company.

Tablets are marketed to children starting at infancy, yet tablets emit microwave radiation when they are wirelessly connected to the internet; exposures can be reduced by only giving the tablet to children when it’s on airplane mode after first downloading movies or games.

Wireless Gaming Systems: Video gaming system consoles have wireless antennas and most instruction manuals state, “this equipment should be installed and operated with at least 20cm (8 in) and more between the radiator [the console] and person’s body (excluding extremities: hands, wrists, feet and legs).

Drones: Drones have wireless antennas and sometimes use smartphones to communicate.

Because smartphones, smart toys and other smart home devices—the so-called “Internet of Things”—have become ubiquitous in our daily lives, we rarely think about how this technology works. But it’s not holiday magic—it’s microwave radiation. In fact, all wireless devices, from smartphones to Wi-Fi and connected stuffed animals, are two-way microwave radios that send and receive a type of non-ionizing electromagnetic radiation also called radio frequency (RF) radiation or microwaves.

Many doctors are concerned about how this daily exposure will affect children’s health in the long term. Before buying your child a Wi-Fi toy or their first cell phone this holiday, be sure you know these facts. Learn more at EHTrust.org.

All wireless devices, from smartphones to Wi-Fi connected stuffed animals, are two-way microwave radios that send and receive a type of non-ionizing electromagnetic radiation called radio frequency (RF) radiation. Children are particularly vulnerable to this type of radiation, which penetrates more deeply into children’s brains than adults.

This holiday season, so-called “smart” toys are being pushed on the marketplace such as:

FactSheet: SmartPhones and Wi-Fi Toys Expose Your Child to Radiation

Family FactSheet on How To Reduce Exposure To RadioFrequency Radiation