The Dark Side of Wireless Technology

The Dark Side of Wireless Technology
By Conan Milner, Epoch Times, 9 January 2018 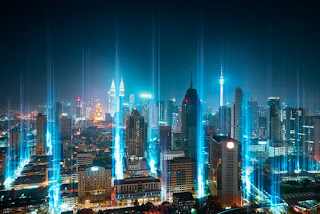 (Image):  Our bodies are subjected to one quintillion (1,000,000,000,000,000,000) times more electromagnetic radiation compared to just a decade ago, according to Olle Johansson, associate professor in neuroscience at the Karolinska Institute in Sweden.(jamesteohart/shutterstock)


Wireless technology is modern magic. For the price of a device and a data plan, you are granted the power to communicate and connect to the World Wide Web through a pocket-sized screen. But some evidence suggests this magic has a dark side, and we may be paying more for it than we realize.

With an estimated 4.8 billion cellphone users worldwide, it’s hard to fathom that something so commonplace could pose health problems. Besides, since the 1990s, government and industry experts have maintained that cellphones are safe, and have pointed to studies that reveal no problems associated with wireless exposure.

This conclusion comes as no surprise in much of the developed world, where public health officials have taken evidence of harm seriously for years. In the United Kingdom, France, Belgium, Russia, and other nations, wireless users—especially children—are urged to minimize their exposure to microwave radiation.

But in the United States, public health officials have been hesitant to sound the alarm. In 2014, the Centers for Disease Control issued a public statement urging caution with cellphone use, but retracted the statement just a few weeks later.

Last month, the California Department of Public Health (CDPH) released consumer guidelines on how to lessen exposure to wireless radiation, particularly for children, citing a possible link to harmful health conditions like cancer and lower sperm count. But it almost didn’t happen. The CDPH made their recommendations several years ago, but refused to release them to the public until a lawsuit forced the agency to do so.

According to the San Francisco Chronicle, an attorney defending the CDPH’s decision to withhold the recommendations said the CDPH didn’t want to cause “unnecessary panic.”

Filmmaker Sabine El Gemayel believes we deserve to have a better understanding of the health impact associated with wireless technology. That’s the mission of her new documentary, “Generation Zapped.”

“I made the movie because no one would believe me,” El Gemayel told The Epoch Times. “But that’s the power of media. When it’s well done, well documented, and doesn’t go into conspiracy theories or fake news, then people listen to the information and are willing to make lifestyle changes for the health of their family.”

“Netflix, for instance, they do streaming, so they’re not going to show this film because of the nature of their business,” El Gemayel said.

“Generation Zapped” features scientists who discuss the dangers regarding wireless exposure, and individuals who claim to have gotten sick from it. The film also tells the story of a powerful wireless industry that has shaped policy for decades, ensuring that their devices and the field that powers them receive little oversight or scrutiny.

“It’s like the tobacco, chemical, or pharmaceutical industries. They tell us this stuff is safe, and then, decades later, you find out that they were hiding all this evidence that it was causing us harm,” said El Gemayel.

One of the experts featured in “Generation Zapped” is George Carlo, an industry scientist turned outspoken critic of wireless technology. In the 1990s, Carlo headed a $27 million research project funded by the cellphone industry to examine the health risks of these devices. The goal was to alleviate consumer fears that the technology might be harmful. But the story did not unfold as planned.

Carlo’s team found what has been echoed in many other studies: a correlation between cellphone emissions and DNA damage, as well as a slightly higher rate of brain tumors in cell users compared to non-users. But the industry dismissed Carlo’s findings and worked to discredit his reputation.

Through its lobbying power, the industry also managed to put the Federal Communications Commission—an agency with no previous experience in evaluating harm and health effects—in charge of cellphone safety.

“The system is broken with regard to protecting consumers from wireless signals,” Carlo said.