Effects of Radiofrequency Radiation on the Environment and Wildlife

Physicians for Safe Technology (PST) just completed an extremely comprehensive section of their website on Environmental and Wildlife Effects. This also includes what may be the most extensive bibliography on the impacts of EMFs on wildlife to date. 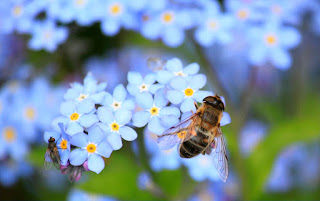 This Scientific Literature Page is organized in sections. Scroll past the summary to view.

A diverse array of animal life relies upon the earth’s magnetic field for navigation, breeding, feeding, migration and survival. Biologists have discovered that wireless electromagnetic radiation disturbs internal magneto-receptors used for navigation, as well as disrupting other complex cellular and biologic processes in mammals, birds, fish, insects, trees, plants, seeds and bacteria with profound impacts on the natural environment. Different species have different interactions with radiofrequency radiation (RFR) and differ in their toxic effect. These effects may not be immediately apparent with a slow decline in the health of wildlife seen over time with cumulative exposure.

Increased Radiofrequency Radiation and The Decline of Birds, Bees and Wildlife

Biologists have noted that wildlife are susceptible to harm from manmade ambient electromagnetic fields. Researchers are now attributing RFR from cellular telecommunications to be a contributing cause of bee “colony collapse disorder”, insect disappearance, the decline in house sparrows in London, as well as the steady deterioration of the worlds bird population with now than 40% of bird species under critical threat. Scientists note a serious lack of radiation monitoring and protocols to study the impacts and call for precaution in the placement of cell towers and further expansion of wireless broadband. In the United States, Section 704 of the Telecommunications Act of 1996 does not allow consideration of environmental effects in the placement of cell towers. Telecommunications Act of 1996

Adverse responses from radiofrequency radiation that have been identified include abnormal behavior, developmental abnormalities, diminished reproduction and increased mortality. Birds, bees, turtles, dolphins, salamanders, salmon, amphibians and other animals use the earth’s weak magnetic field and their own internal magneto-receptors to navigate. Birds have feathers that can act as antenna and amplify the negative effects of RF radiation Bigu-del-Blanco (1975). Insects, the base of the food chain, appear particularly susceptible to radiofrequency radiation, especially 5G millimeter wavelengths which are the size of the insect and create a damaging resonance effect.

Mammals, like humans, have similar reproductive organs, immune systems and nervous systems, thus are susceptible to molecular and cellular harm from artificial wireless radiofrequency wavelengths. Katie Singer, in her extensively referenced book Electronic Silent Spring, highlights that the earths living systems evolved their own internal and external signaling systems in the presence of the earth’s low electromagnetic environment and thus are vulnerable to the much higher levels of artificial pulsed electromagnetic radiation experienced today.

Stationary cell and radio towers create a circle of high power wireless radiation (1500 feet) around them, with a much larger radius (dozens of miles) of lower power radiation, which scientists have found can contribute to environmental disturbances. In cities the density is much higher with more towers and co-location of multiple antennas on a single tower to accommodate multiple telecommunication carriers. Firstenberg (2017) in his fascinating and well-researched book, The Invisible Rainbow: A History of Electricity and Life, describes both observations and biological experiments performed, mostly in Europe, where radio broadcast towers caused not only human symptoms but also affected widespread forest health with loss of birds, thinner growth rings on trees, poor seed germination and loss of duckweed, among other effects. When these towers were removed, not only did local residents symptoms disappear, the forest recovered. The Skrunda Radio Location Case.

Trees are Harmed by Radiofrequency Radiation

In Colorado, Aspen trees have been on the decline and experiments have pointed to radiation from cell towers causing poor growth and smaller leaves- Haggerty 2010 A 4-year experiment by Waldmann-Selsam et al (2016) clearly demonstrated, with accurate RF emission testing, cell tower radiation causing the death of nearby trees over time. He notes, “These results are consistent with the fact that damage afflicted on trees by mobile phone towers usually start on one side, extending to the whole tree over time.” These are truly alarming findings and serve as a dire warning on further wireless expansion, especially with regards to agricultural rural zones or wildlife areas with sensitive species. Research also raises the question of wildfires sparked by dead or dying trees near cell towers.
Bird Migration Disrupted More by Weak Magnetic Fields

Biologists have noted that birds magnetic compass orientation appears more susceptible to weak broadband electromagnetic fields. Schwarze et al (2016), note in their paper that weak magnetic fields can have much more powerful influence on bird migration than strong fields. They state, “Our results indicated that the magnetic compass orientation of European robins could not be disrupted by any of the relatively strong narrow-band electromagnetic fields employed here, but that the weak broadband field very efficiently disrupted their orientation” Pakhomov (2017) and Wiltschko (2015) both confirmed this effect.

It is well established that magnetite, a form of iron ore, is found in a wide variety of organisms who use this magneto-receptor to sense the earth’s low energy magnetic field as a directional reference. (Cadiou and McNaughton). Magnetite acts as an internal compass of sorts. Migrating birds, fish, insects and animals connect these magneto-receptors with the earth’s natural geomagnetic forces, to successfully guide them in long and short distance journeys, necessary for feeding and breeding. Modern communications systems with a proliferation of cell towers and smart meters in cities and rural areas, create a fluctuating blanket of continuous pulsating artificial radiofrequency wave mixtures that can alter local magnetic fields and thus impair migration and orientation of birds in addition to effects on pollinators. In 1998, soon after cell towers were installed in Pennsylvania, pigeon races ended in disaster as up to 90% of birds were disoriented and lost their navigational skills. When Homing Pigeons Don’t Go Home Again NY Times. Dec 6, 1998.

Independently replicated studies have confirmed the radio frequency (RFR) effects on orientation of birds. Engles et al (2014) exposed migratory European robins to background electromagnetic noise present in unscreened wooden huts at the University of Oldenburg city campus in Germany and found they could not orient using their magnetic compass. If grounded their orientation reappeared but disappeared again if broadband radiofrequencies were generated inside the huts. He did not believe the effects at first and performed the same double-blinded study many times in 7 years and with different graduate students to confirm the effect before publishing his findings.

Dr. Engles concluded, “The disruptive effect of radiofrequency electromagnetic fields is not confined to a narrow frequency band and birds tested far from sources of electromagnetic noise required no screening to orient with their magnetic compass.” Research has also demonstrated abnormalities in reproduction and behavior of birds nesting near cell towers in addition to harm to amphibians. This raises the question of the health and sustainability of cites with a dense assortment of telecommunications towers.

Bees are a critical pollinator species. Of the 100 crops that provide 90% of the world’s food supply, 71 are pollinated by bees, according to the UN Environmental Program. Researchers agree that we are in the midst of a pollinator crisis. The White House in 2014 was so concerned it established a Federal Strategy with a Pollinator Task Force to promote bee health. As bee numbers have plummeted around the world, scientists have been investigating causes. They have found several contributing factors affecting the health and reproduction of bees, including pesticides, global climate change, loss of habitat and air pollution with new research pointing towards microwave radiation as an important and yet unrecognized cause for concern. Bees contain magnetite granules in their abdomen which offer them the ability to navigate with the earths natural low power non-pulsating magnetic field.

Bees operate in about a 5 kilometer radius and typically find their way without difficulty. Sharma et al (2010) looked at bee behavior placing a cell phone near a hive. They found worker bees returned less and less frequently to the beehive after the installation of a mobile phone. There was a significant decline in colony strength and the rate of queen egg laying.

Colony Collapse Disorder started After the Use of Pesticides

Cammaerts (2017), biologist and author of 54 peer reviewed publications on insects, observes that the sharp decline of bees did not start with the use of insecticides but much later and removal of pesticides has not been accompanied by the expected rise in bee populations. While she does not discount a role for insecticides causing bee decline, she advises beekeepers to consider that radiofrequency radiation could also have an impact and protect their hives by locating these in a low EMF environment or placing them in a Faraday cage or enclosure.

Insects: The Base of Our Food Chain Are In Decline
Bees are not the only insects necessary for sustainability and all are suffering decline. Purdue University among others points out that insects are critical in living ecosystems. They are wild and domestic pollinators, provide a source of food for amphibians, reptiles, birds and mammals, are primary decomposers for fungi, dead plants and animals and also eat other pest insects thus playing a beneficial role in the balance of nature. A Yale report in 2016 highlighted a dramatic drop in insect populations in many parts of the world. Insect traps set up in Germany are showing a startling 4 to 5 fold reduction. Biologists attribute this to monoculture farming, pesticides and habitat loss, however the scientific literature points to radiofrequency radiation as another significant contributing cause. Yale report on insect decline.