Thailand: NBTC Asks WHO for Clarity on Telecom Base Health Risks

The telecom regulator is urging the World Health Organization (WHO) to clarify whether radio-frequency electromagnetic fields emitted by telecom base stations have any effect on public health. 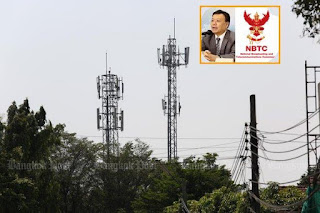 (Photo): Takorn Tantasith (inset) secretary-general of the National Broadcasting and Telecommunications Commission (NBTC) wants to know from the World Health Organisation if telecom towers and base stations like these in Bangkok's Sai Mai district post a health threat. The WHO can't tell him. (File photo by Pattanapong Hirunard)

The move aims to address concerns and complaints made against base stations and lodged against mobile operators, the regulator and local governments for the past decade.

Takorn Tantasith, secretary-general of the National Broadcasting and Telecommunications Commission (NBTC), submitted an official letter to WHO last month urging it to address the concern and confusion about whether radio-frequency electromagnetic fields affect public health because of all the digital infrastructure development in the country.

Mr Takorn is participating in the annual meeting of Global Coordination of Research and Health Policy on RF Electromagnetic Fields in Paris from Nov 12-14.

This is the first time the NBTC's secretary-general has given a speech on radio-frequency electromagnetic fields and public health in Thailand.

Mr Takorn is about to re-discover the old adage that you can't prove a negative.

In a report in 2011 (PDF format), the WHO's International Agency for Research on Cancer (IARC) classified radio-frequency electromagnetic fields as "possibly carcinogenic to humans".

Neither the reporting agency nor WHO headquarters have expanded on that report or clarified what "possibly" means.

To reach its unsatisfactory and inconclusive report, the IARC convened a panel of 31 experts to look at the available evidence.

In short, their conclusion is what Mr Takorn doesn't want to hear: that there is some evidence linking mobile phones to cancer, but the evidence is too weak to make any strong conclusions

The chairman of the group, US pulmonary physician and epidemiologist Dr Jonathan Samet, said at the time of the 2011 report that, "The conclusion means that there could be some risk, and therefore we need to keep a close watch for a link between cell phones and cancer risk."

However, that "close watch" - if it has occurred at all - has been opaque, as WHO never has updated the seven-year-old statement.

The current, but not updated WHO fact sheet on mobile phones, issued in 2014, can be found here (PDF).

Finally from WHO, a promised study by the cooperating International Electromagnetic Fields (EMF) Project, due in 2016, appears to have been cancelled, or perhaps is still in production.

Mobile cellular services are growing fast in Thailand to meet the needs of the commercial, industrial and public sectors, accelerating the pace of infrastructure development.

The NBTC has auctioned off three frequency bands -- 2100-megahertz, 1800MHz and 900MHz -- in 2012, 2015 and 2018, respectively, for 3G and 4G services. Since then mobile operators have rushed to expand site installations to achieve nationwide coverage.

With the rapid growth of new site installations, the general public has expressed concerns about possible health risks caused by exposure to radio-frequency electromagnetic fields emitted by base station antennas.

In some areas, locals protest the installation of base stations located in their communities despite needing to use 3G or 4G devices.

Some cases were brought before the Administrative Court to seek revocation of a radio communication installation licence at particular sites.

"Complaints were made against base stations and lodged through mobile operators, the regulator as well as local governments. Some of those complaints were made through media and were headline news on television channels. Internet and social media are often used as a mean to propel complaints, sometimes sharing one-sided and misleading information," he said.

Symptoms caused by radio-frequency exposure, as specified in the complaints, include fatigue, tiredness, headache, tinnitus, insomnia, stressed, vomiting and anxiety due to a fear of cancer in some cases, mobile phone base stations were blamed as a possible cause of cancer.

Email ThisBlogThis!Share to TwitterShare to FacebookShare to Pinterest
Libellés : EMF Cell towers, WHO