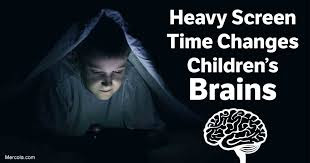 Most people today live in a sea of radiofrequencies emitted from wireless technologies of all kinds, from routers to smartphones, tablets, baby monitors, TVs, appliances, smart meters and many more.

According to many experts, chronic, heavy exposure could have severe repercussions for our health, especially that of children, who are now exposed even before birth. Research also suggests interaction with social media, games and apps online produces a number of effects, both physical and psychological.

Heavy Use of Wireless Devices Changes Brain Structure in Children

In the largest long-term study1,2,3 of brain development and youth health in the U.S., the Adolescent Brain Cognitive Development (ABCD) Study,4 reveals the brains of the most prolific users of electronic devices look different compared to those who use smartphones, tablets and video games less frequently.

In all, more than 11,000 children will be followed for a decade to assess how various childhood experiences and environments affect brain development and psychological health. As noted by the researchers,5 "The data will provide a resource of unprecedented scale and depth for studying typical and atypical development."

These preliminary findings, based on the brain scans of 4,500 9- to 10-year-olds, reveal children who use electronic devices for seven hours or more each day have premature thinning of the brain cortex, the outer brain layer that processes information from the five physical senses (taste, touch, sight, smell and sound).

The exact ramifications of this anomaly are still unknown. According to Dr. Gaya Dowling, a researcher with the National Institutes of Health, which is sponsoring the $300 million study, thinning of the cortex is thought to be part of the brain maturation process, so what these scans are showing is that this process is being sped up in children who get a lot of screen time6 (7-plus hours a day).

They cannot prove that the changes are definitively caused by the screen time, and the full effects won't be known until years from now, as the emotional and mental health outcomes of these children are evaluated. Still, preliminary results suggest as little as two hours of screen time per day may impact cognition, resulting in lower scores on thinking and language tests.

According to the "Growing Up Digital" report by the American Academy of Pediatrics (AAP), published in October 2015:7

"The 2013 Zero to Eight study … showed that 38 percent of infants younger than age 2 use mobile devices like smartphones. A 2015 Pew Research study reports that 73 percent of 13- to 17-year-olds have smartphones and 24 percent admit using their phones almost constantly."

According to the report, "It is clear that very young children need 'contingent interaction — two-way social interchange — to promote learning." This is also noted in the 60 Minutes report8 (see featured video).

Research shows that babies do not transfer what they learn from the iPad to the real world, or from two-dimensional interaction to three-dimensional reality. For example, the ability to play with virtual Legos does not transfer over into the skill of manipulating real Lego blocks.

Despite such concerns, the 2015 AAP guidelines for screen time for children relaxed its recommendations, noting that "Parents should model responsible media use," and that media content and diversity are important considerations, but that video games can be "powerful tools for learning because they help youth work toward reward," and "engage in experimentation."

Previous guidelines — developed before the popularity of iPads and smartphone apps designed for young children — discouraged all screen time for children under the age of 2, and recommended a limit of two hours of screen time for kids older than 2.

The updated guidelines removed specific time limits, stressing the need for parental control instead. Recommendations include setting limits for screen time at every age, avoiding displacement (i.e., not letting screen time dominate and take the place of face-to-face interactions and creative play), addressing digital etiquette, engaging in digital media use together, and establishing definitive media-free zones and periods, such as during meals and at bedtime.

Digital Media Is Designed To Be Addictive