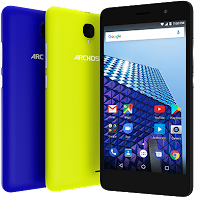 In a new press release published on its website, the French National Frequency Agency (ANFR) announced that it had noted during these controls that the Archos access 50 smartphone exceeded the regulatory thresholds for the trunk Specific Absorption Rate (SAR). Indeed, it was measured at 3.1 W/kg, which represents an overrun of more than 50% of the European regulatory limit value set at 2W/kg.

In accordance with the regulations (Article L43 II bis of the French Post and Electronic Communications Code):

“ANFR has given notice to Archos, the company responsible for marketing this telephone, to take all appropriate measures to put an end to the non-compliance found on equipment currently on the market and those already on the market.”

However, the information procedures for ARCHOS owners are at the very least insufficient or even misleading. Indeed, as indicated in the “update”, there is no mention of exceeding the DAS… and we can easily imagine why. Not seen, not taken!

“Our quality teams have detected a security issue. Please apply this mandatory update. You need a WIFI or 3G connection (unlimited package) to be able to perform the update”

And even more seriously, here is the mention of DAS which still appears today on the manufacturer’s website “Body Max:1.184W/Kg (10g)”. Either the initial value, misleading for potential customers. After updating, the SAR trunk is 1.36 W/kg… and the manufacturer did not consider it useful to put any information on his page. It’s time for a change!

Since April 2018 and the withdrawal from the French market of the Hapi 30 model marketed by Orange, it is already the 9th mobile phone whose wave levels in contact with the body exceed the limits designed to protect the health and safety of users. Indeed, of the 51 mobile phones controlled by ANFR in the first half of 2018, 20% (including the Archos access 50) had to be either removed (2) or updated (7). 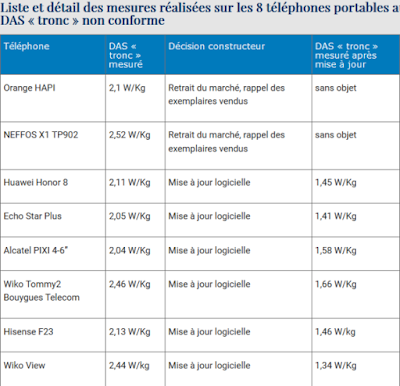 However, ANFR only controls a very small proportion of mobile phones and other connected objects placed on the market each year as part of a European procedure that is at the very least inadequate. This is all the more so since, to date, no controls have been carried out in other European countries. Faced with these serious shortcomings, it is time for effective control measures to be put in place in France, Europe and internationally.

The most dangerous phones still on the market

The public authorities have still not responded to our appeal launched on 28 June 2018 in Paris to have more than 250 models withdrawn or updated, with DAS levels well above the levels not to be exceeded and those just pinned down by ANFR. Indeed, with incomprehensible hypocrisy and cynicism, the control agency has labelled mobiles on its OPEN DATA website as “compliant” if they exceed more than twice the level of the ARCHOS access 50…look for the error!

In addition, there is no longer any reference to possible sanctions and criminal convictions for manufacturers who do not comply with the regulations. Can manufacturers put consumers’ health and safety at risk with impunity?

However, on 25 July 2018, Mr Thomas Velter, Head of Cabinet of Bruno Le Maire, Minister of Economy and Finance, wrote to us:

We have to admit that nearly 6 months later, this is not the case. The file is in the past and we have never been contacted by the DGCCRF.

“Our action for both transparency and the protection of users’ health is progressing a little more each day but is still generally too insufficient to meet the challenges of health and industry. It is time for the public authorities and the ministers concerned to take the necessary decisions. Our patience and that of the victims is now at an end. “