Mobile Telephony: How Safe Is It? 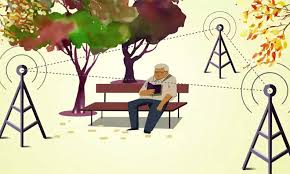 Some scientists are sounding the alarm about potential health risks caused by radiation from mobile technology. Completely unfounded, assure most radiation safety authorities. They take advise from a small circle of insiders who reject alarming research – and who set safety limits.

The following graphic shows just how close-knit this circle is: [see original article]

Is radiation from mobile technology dangerous? As the world is about to enter the 5G era, engineers, physicists, biologists and cancer doctors can look back at thousands of studies and calculations on health effects from radio frequency electromagnetic fields in the previous 2G and 3G technologies. But there is strong disagreement as to how to interpret the findings – and the implications for 5G, for which there is a lack of studies.

Curiously, one group of scientists dominates the entities that are to provide professional advice on radiation risk. This means research by others fall under the radar of politicians who must use science to make laws and regulations.

This constitutes monopoly of opinion, says Einar Flydal. The former social scientist at Telenor in Norway has authored the book “Smart meters, the law and health”. He criticises the scientific base for the radiation safety limits that apply in most countries.

“The majority of researchers are defined as dissenters and are simply shut out through a process that is not ethically justifiable. This cannot be understood from scientific results. It must be understood politically, as the result of a battle for interests where radiation protection authorities often become pawns with lacking resources”, claims Flydal.

His perspective is countered by Gunnhild Oftedal, associate professor at the Norwegian University of Science and Technology, specialised on effects of electromagnetic fields on humans. She is part of a small international network that determines what science to trust. Oftedal doesn’t like the research field described as consisting of two competing camps.

“Issues that may have far-reaching consequences for individuals and society easily get polarised, just look at the climate debate. In our field it is easy to put people in two camps, but the landscape is much more nuanced”, according to Oftedal.

In Norway, everyone looks to the Directorate for Radiation Protection and Nuclear Safety (NRPA) for radiation advice. This is the highest professional authority on radiation and health hazards.

The NRPA does not itself conduct research on radiation from electromagnetic fields, EMF, according to physicist and director Tone-Mette Sjømoen. “We lean on reviews made by international expert groups. These consider all available science, evaluate it and draw conclusions based on the overall scientific picture”.

This state of affairs is quite typical among radiation safety authorities in Europe, most of which take or have been taking their advise from some or all of these scientific bodies: