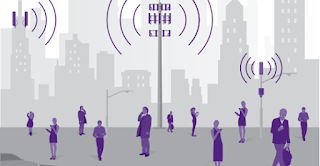 EHT was just asked, ” What published research shows the low radiation levels from cell antennas could be harmful?” EHT decided to summarize a short list of studies and share our answer with the public.

“Small cells” are microwave antennas (basically shorter cell towers) rapidly being installed in public areas on utility poles and street lights in front of homes, parks and schools. Just like cell towers, these wireless antennas generate and emit microwave radiofrequency (RF) radiation to transmit 2G, 3G and 4G network signals. Companies soon plan to add a new technology called 5G which will use current 4G technology plus even higher frequencies. The higher frequencies include millimeter-wave emissions that were not previously released into public areas.

Companies state that these 4G and 5G antennas will increase the wireless radiation levels in the area so much that they are working to loosen several governments’ radiation limits in order to roll it out. More than 240 scientists published an appeal to the United Nations to reduce public exposure and called for a moratorium on 5G citing “established” adverse biological effects of RF radiation.

Cancer epidemiology update, following the 2011 IARC evaluation of radiofrequency electromagnetic fields is a comprehensive research review of RF effects in human and animal research. The review concludes that scientific evidence is now adequate to conclude radiofrequency radiation is carcinogenic to humans (Miller 2018). Several previously published studies also concluded that RF can “cause” cancer, for example, Hardell 2017, Atzman 2016 and Peleg 2018.

The US National Toxicology Program (NTP) Study on Cell Phone Radiationfound “clear evidence” of cancer, heart damage and DNA damage in a $30-million study designed to test the basis for federal safety limits (NIEHS). The heart and brain cancers found in the NTP rats are the same cell type as tumors that researchers have found to be increased in humans who have used use cell phones for over 10 years. Thus, researchers say this animal evidence confirms the human evidence (Hardell 2019.)

The Ramazzini Institute (RI) Study on Base Station RF was another large scale rat study that also found increases in the same heart cancers as the NTP study found—yet the Ramazzini rats were exposed to much lower levels of RF than the NTP rats. In fact, all the RI Ramazzini radiation exposures were below FCC limits, as the study was specifically designed to test the safety of RF limits for cell tower/base stations (Falconi 2018.)

Tumor promotion by exposure to radiofrequency electromagnetic fields below exposure limits for humans” is a replication study that used very, very low RF exposures (lower than the Ramazzini and NTP study) and combined the RF with a known carcinogen. Researchers found elevated lymphoma and significantly higher numbers of tumors in the lungs and livers in the animals exposed to both RF and the carcinogen, leading researchers to state that previous research (Tillman 2010) was confirmed and that “our results show that electromagnetic fields obviously enhance the growth of tumors” (Lerchl 2015).

5G Wireless Expansion: Public Health and Environmental Implications is a 5G research review that documents the range of reported adverse effects of RF and millimeter waves—effects range from cancer to bacteria growth changes to DNA damage. The study concludes that “a moratorium on the deployment of 5G is warranted” and “the addition of this added high frequency 5G radiation to an already complex mix of lower frequencies, will contribute to a negative public health outcome … from both physical and mental health perspectives” (Russell 2018).

“The Human Skin as a Sub-THz Receiver – Does 5G Pose a Danger to It or Not?” and “The Modeling of the Absorbance of Sub-THz Radiation by Human Skin” are two papers by physicists presenting research that found higher 5G frequencies are intensely absorbed into human sweat ducts (in skin), at much higher absorption levels than other parts of our skin’s tissues (Betzalel 2017, Betzalel 2018). The researchers conclude, “we are raising a warning flag against the unrestricted use of sub-THz technologies for communication, before the possible consequences for public health are explored.”