Thank you to Electromagnetic Sense Ireland for providing this article which disappeared from the NME website.  We now find this article "EE respond to health concerns over Glastonbury’s 5G mobile network trial" on the website.

This article has since disappered from NME website. It can now be seen HERE 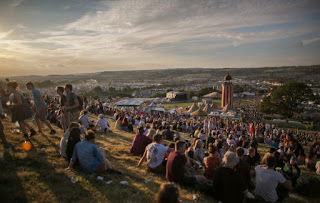 “EE have announced plans to trial a 5G network at this year’s Glastonbury.

Some are questioning whether they will even attend the festival now because of the trial.

A lot of discussions are being had over the announcement that EE will trial a 5G mobile network at this year’s Glastonbury, with many fearing health concerns.

The trial will mark the first time the technology, which will offer internet speeds that double what 4G is capable of, has been used at a festival and comes ahead of it being rolled out across the UK later this year.

With EE due to install five temporary masts across Worthy Farm, Pete Jeavons, EE and BT’s Marketing and Communications Director, said: “Smartphones have become a festival must-have as we’ve seen each year with more and more data being consumed at Glastonbury Festival.

“As the long-standing technology partner to this iconic event, we are committed to building a network powerful enough to cope with this huge demand. With the introduction of 5G this year, we are able to trial this new technology at Worthy Farm and make history as the UK’s first 5G-connected festival.”

But it appears not everyone is excited about the trial.

While many scientists believe 5G to be perfectly safe, there are some, including a University of California public health professor, who have described 5G as “a massive experiment on the health of all species.”

“Since researching the health effects, I have a real concern over masts, but also Wi-Fi and the looming 5G technology,” said Jane Harvey, founding member of VAM, according to PlymouthLive. “5G is not good at all. Unfortunately Cornwall and Cumbria have been chosen to trial 5G in rural areas.

“The US has seen 5G rolling out in many places, impacting human health, wildlife and the environment. 5G requires closer connectivity, a mast every 10-20 houses. So, imagine the countryside dotted with these. Also, once they get permission for one mast on an AONB, a precedent is set and it would be very tricky to stop more.”

According to Harvey, there has been massive spikes in depression and anxiety, as well as a host of other complaints, following the roll out of 5G in the US.

“5G is a weapons grade frequency,” she added. “There is no knowing the future implications for us – we are the guinea pigs.”

Someone else chiming in on the matter, Dr. Joel Moskowitz, a public health professor at the University of California, Berkeley, told the Mail Online that MMWs (millimetre waves – the way in which 5G communicates) could pose a very real danger.

“The deployment of 5G, or fifth generation cellular technology, constitutes a massive experiment on the health of all species,” he explained. “Because MMWs are weaker than microwaves, they are predominantly absorbed by the skin, meaning their distribution is quite focused there.

“Since skin contains capillaries and nerve endings, MMW bio-effects may be transmitted through molecular mechanisms by the skin or through the nervous system.”….