Burning 5G Towers Across Europe is Harming Health, Wildlife And The Climate

"Without question, burning private property is a crime. This should be stopped. So should the degradation of our environment by untested technologies." 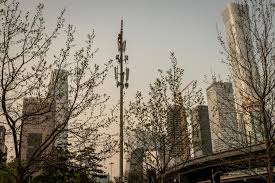 Reports of cell towers being burned and telecom workers being harassed in the U.K., The Netherlands, Ireland, and Cyprus is something scientists around the world are rightly condemning. Violent actions will only beget violent consequences for the very environment these misguided opponents seek to protect. Ironically, those living in the shadow of these towers will face the most serious hazards from any attempt to set them aflame. Where a tower or other equipment can be made to ignite, this requires the use of highly toxic combustible flammable chemicals and accelerants. If telecom equipment is set afire, this then can release a spew of toxic metals, plastics and invisibly deadly knife-like slivers of glass that rain environmental hazards onto anyone nearby and could permanently damage the local environment for years.

The towers are complex structures housing fiber optic cables that are produced using highly reactive gases such as silicon tetrachloride, germanium tetrachloride and germanium fluoride, and phosphorous oxychloride. Igniting this equipment creates a soup of corrosive cancer-causing chemicals and heavy metals some of which can persist for decades. The generators at the base of towers are likewise made up of numerous metals and plastics that become especially dangerous when combusted. Burned plastics can release the dreaded persistent chemical byproduct dioxin.

News reports are attributing the wanton destruction of telecom properties in the U.K. to purported conspiracy-fueled paranoia from luminaries like Woody Harrelson, John Cusack, who have questioned whether exposures from wireless millimeter waves of 5G could worsen the coronavirus. Hang on a second. Let’s look at what these celebrities have really said. Contrary to what has been asserted, none has suggested that wireless signals from 5G actually cause the virus. In expressing her own concerns, the British pop star M.I.A. correctly tweeted, “I don’t think 5G gives you coronavirus.”

We have to start out with some inconvenient complexities of the science. Whatever the 5G network will eventually be there is no question that it will have to be able to switch back and forth between 3G and 4G systems -that have already been shown to cause cancer and damage sperm. If 5G does not incorporate these earlier frequencies, all those devices we already own would not work. In much of the world wherever 5G will be operating, it will be using the same frequencies as these earlier technologies--sub-6GHz range.

One of the world's oldest corporate reinsurance companies Swiss Re, has long had doubts about 5G. In looking at what is known about the evolving technology as of May 2019, this large secondary insurer refused to cover potential health or environmental damages from telecom systems especially 5G, pronouncing this evolving technology potentially as problematic as asbestos--a toxic fiber that bankrupted so many firms there is a list of over 100 manufacturers, including Johns Mansville, Owens Corning, and WR Grace, that now form the Asbestos Trust Fund from which injured parties can seek compensation. After reviewing reports from throughout Europe where some governments, concerned about the lack of safety testing, have brought a halt to proposed installations, Swiss Re declared 5G to be "off the leash."

Just what led such a firm worth 36.1 billion (with a profit of $2.1 billion last year) to conclude that 5G constitutes a huge business risk a year ago--before COVID-19 had been discovered-- is probably worth examining. The liabilities of 5G and telecom operations that Swiss Re foresaw more than a year ago were not a result of virally spreading conspiracy theories ricocheting around the internet but reflected the due diligence of serious underwriters that fingered several critical matters. For example, they noted that cybersecurity threats are worsened by the prospect of defending the doubled number of new antennas required by a 5G system. In addition, the report worried that squabbling over information security and national sovereignty and the growing potential for espionage or sabotage could upend international cooperation, and impact financial markets negatively.

The Swiss Re report also observed that within Europe there is a broad range of governmental responses to wireless radiation overall. Most recently since their report was written a year ago, this includes a halt to 5G last month by the nation of Slovenia awaiting scientific review. In contrast, assurances that all is well provided by unelected, self-appointed groups like the International Commission on Non-Ionizing Radiation Protection, are accepted without question and form the basis for the FCC to move full speed ahead with no safety testing. Other expert commentators have called for disbanding this same group. Still other groups warn the proposed 5G system could interfere with weather prediction such as the National Oceanographic and Atmospheric Administration. And what will be the impact of 20,000 5G satellites?

Scientifically advanced nations like Switzerland, France and Israel are carrying out their own investigations of how to make all telecom communications technologies safer. Those who are concerned about cellular networks and the prospects of 5G include serious scientists like those that run the French national agency to evaluate public health impacts of radiation who issued a 265-page report in 2019 and are in the process of evaluating what it terms, “a lack of scientific data on the potential biological and health effects linked to exposure to 5G.”

Without question, burning private property is a crime. This should be stopped. So should the degradation of our environment by untested technologies.

Dr. Devra Davis is President of ehtrust.org, who served in the Clinton administration from 1993-1997 and was a member of the team of IPCC scientists awarded the Nobel Peace Prize in 2007.