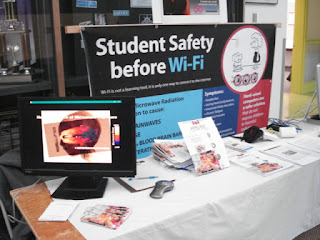 Teton Village, WY -- (SBWIRE) -- 03/03/2017 -- After reviewing new and growing evidence on health risks of wireless radiation, the Maryland State Children's Environmental Health and Protection Advisory Council (CEHPAC) issued a Report advising the Department of Education to recommend local school districts reduce classroom wireless radiation exposures by providing wired-rather than wireless-internet connections. CEHPAC's health experts include Governor appointed pediatricians, Maryland State House/Senate appointees and representatives of the Department of Education and Department of Health. Theodora Scarato, MSW, of the Environmental Health Trust, first brought the issue to the Council's attention three years ago, in February of 2014. The Council cited the recent US National Toxicology Program (NTP) findings of increased rates of rare malignant cancers in animals, as well as children's unique vulnerability to the radiation in their recommendations to minimize exposure.

Several countries, such as France, Israel and Cyprus, already have protective measures minimizing school wireless radiation exposures as national policy. However, CEHPAC's action to issue recommendations to reduce classroom wireless exposures is the first of its kind by an expert state body in the United States.

1. "The Maryland State Department of Education should recommend that local school systems consider using wired devices" "WiFi can be turned off" and instead "a wired local area network (LAN) can provide a reliable and secure form of networking...without any microwave electromagnetic field exposure."

2. New construction and renovations: "If a new classroom is to be built, or electrical work is to be carried out in an existing classroom, network cables can be added at the same time, providing wired (not wireless) network access with minimal extra cost and time."

3. The Maryland State Department of Education should recommend that local school systems use strategies to minimize exposures: "Have children place devices on desks to serve as barrier between the device and children's bodies; Locate laptops in the classroom in a way that keeps pupil heads as far away from the laptop screens (where the antennas are) as practicable; Consider using screens designed to reduce eyestrain; Consider using a switch to shut down the router when it is not in use."

4. "The Maryland Department of Health and Mental Hygiene should provide suggestions to the public on ways to reduce exposure: Sit away from WiFi routers, especially when people are using it to access the internet. Turn off the wireless on your laptop when you are not using it. Turn off WiFi on smartphones and tablets when not surfing the web. Switch tablets to airplane mode to play games or watch videos stored on the device."

5. "The General Assembly should consider funding education and research on electromagnetic radiation and health as schools add WiFi to classrooms."

7. The Report should be shared with the United States Department of Health and Human Services, Federal Communications Commission, Maryland State Department of Education and Maryland General Assembly.

"While this report focused on WiFi radiation in schools, there are additional concerns about mobile phones and cell phone towers. CEHPAC plans to look at these broader issues over the next year," the CEHPAC Council Report states.

"Our children's healthy future rests on the responsible actions of today," stated Scarato. "21st century learning should include 21st century science," Scarato pointed to research that found wireless alters brain development in addition to increasing cancer. "Corded non-wireless connections in school are an important part of a safe and healthy school environment, respecting not only our children but also the teachers and staff."

Referring to the fact that US wireless public exposure limits were set in 1996, without testing for long term safety, the CEHPAC Council Report also stated that, "decades-old standards need updating in light of new science." Such statements are in line with the American Academy of Pediatrics, which has also called for a regulatory review and states that children's brains are less mature and can absorb proportionately twice the wireless radiation as an adult because of children's thinner skulls that contain more fluid.

"If you plan to watch a movie on your device, first download it, then switch to airplane mode while you watch in order to avoid unnecessary radiation exposure," recommends the American Academy of Pediatrics as part of its "Ten Tips on Cell Phone Radiation."

In response to the 2016 NTP study findings of a cancer link, the American Academy of Pediatrics, Consumer Reports, Obstetricians and several Medical Associations issued recommendations to reduce cell phone and wireless exposures to children. The American Academy of Pediatrics has also repeatedly called on the United States government to strengthen wireless exposure regulations to protect children and pregnant women.

The Council heard testimony from health organizations and from parents who reside in multiple counties in the State of Maryland, including Montgomery County, Prince Georges County, Anne Arundel County, Baltimore County and Howard County. The Council also received hundreds of pages of expert scientific material and comments prior to the final Report, which the Council has posted on their website.

"Parents have a right to know if there is an environmental hazard in the classroom and actions that can be taken to reduce exposure. The stakes are so high for our children, yet we are way behind what has been happening around the world. Over 20 countries have taken steps and in some cases passed legislation to protect their youngest and most vulnerable citizens and it is time we do the same for ours," stated Montgomery County parent Laura Simon, pointing to countries like France, Cyprus and Israel.

"I was shocked to learn no government health agency had reviewed the issue from a health and safety standpoint considering how fast WiFi was being installed in schools across the State." Scarato described the process of how she brought the health issue of children's exposures to wireless in schools to Maryland State agencies almost three years ago, by first writing letters of concern about the school radiation exposures.

Dr. Sharfstein, then Secretary of the Maryland Department of Health, initially responded to Scarato's concern by stating, "It is fair to say there are legitimate questions about the long-term health implications of microwave radiation" and that the Department of Health "would be interested in the advice and counsel of groups such as the Children's Environmental Health and Protection Advisory Council."

Scarato pointed out that the Education Department representative on the Council voted in favor of the CEHPAC recommendations to reduce wireless exposures. The Maryland State Department of Education (MSDE) also had responded to Scarato's initial concerns by referring her to CEHPAC, which "exists for the purpose of identifying environmental hazards that may affect children's health and recommending solutions to those hazards."

Medical researchers are pointing to an array of psychological, emotional and physiological health issues screens pose to children at the same time that schools are integrating wireless networks and one to one device initiatives into classrooms.

In 2017, Maryland lawmakers heard testimony on Bill HB866, a first in the nation bill to create uniform screen safety guidelines for screen use in public schools "to protect children from the documented health hazards posed by daily use of digital devices." In response to wireless radiation health concerns, many schools worldwide are replacing wireless systems with wired systems, and limiting time children spend on screens.

Local/State/National and International Policy action on Wireless and Children
http://ehtrust.org/wp-content/uploads/International-Policy-Precautionary-Actions-on-Wireless-Radiation.pdf

Letter from the AAP in Support of the Cell Phone Right to Know Act
http://ehtrust.org/wp-content/uploads/2015/12/aap_support_letter_cell_phone_right_to_know_act.pdf

Testimony to Maryland State Board of Education
https://youtu.be/XGhhtuvnqCs

Testimony of a High School Student in Montgomery County about this issue to the State Board of Education
https://www.youtube.com/watch?v=wnRGRnboXBg