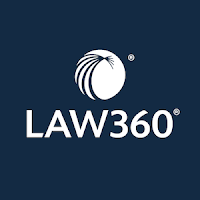 "We hold ... that the FCC's regulations of the [radiofrequency] radiation of cell phones, promulgated under the 1934 Act, preempt plaintiffs' state-law claims as they are presented to us on appeal," says the judgment written by U.S. Circuit Judge William A. Fletcher.
Read more »
Publié par MerisRM à l'adresse 9:22 AM No comments: 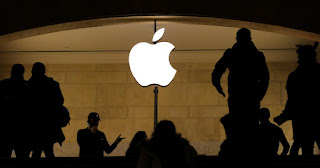 The U.S. Court of Appeals for the Ninth Circuit on Friday affirmed the dismissal of a lawsuit alleging Apple iPhones emit dangerous radiation after the plaintiffs themselves conceded the opposite was true on appeal of a trial court’s summary judgment for the tech giant.

The lawsuit followed an August 2019 report in the Chicago Tribune that said its investigation into RF radiation exposure in cellphones revealed from the iPhone 7 “measured over the legal safety limit and more than double” what Apple found from its own testing.
Read more »
Publié par MerisRM à l'adresse 12:43 PM No comments: 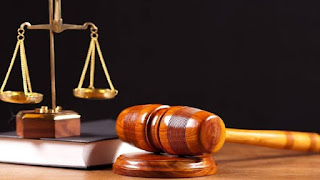 ‘The Upper Tribunal has ruled that a council must secure special educational provision for a child who has electromagnetic hypersensitivity and is particularly sensitive to Wi-Fi signals.In EAM v East Sussex County Council (Special educational needs) [2022] UKUT 193 (AAC), on appeal from the First-tier Tribunal, Upper Tribunal judge Jacobs found that the child should be considered disabled by her condition under the Equality Act 2010 and that she required an Education, Health and Care Plan (EHCP).

The child’s parents – who argue that their daughter needs to be schooled in a ‘low electromagnetic environment’ – have been attempting to secure an EHCP that acknowledges her condition since 2017.
Read more »
Publié par MerisRM à l'adresse 8:44 PM No comments: 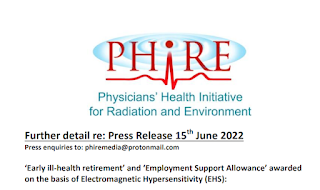 Sally Burns, a 59 year old social worker successfully won her appeal for early ill-health retirement and will now receive full pension due to disabling Electromagnetic Hypersensitivity (EHS).
Mrs Burns states, “I have worked in Health and Social Care for 35 years, supporting some of the most disabled and vulnerable members of our society and advocating to ensure their rights have been upheld. To have been on the receiving end of societal prejudice, discrimination, ignorance and misunderstanding, has been devastating. My career has been important to me and I'm disappointed to be having to retire early instead of working beyond retirement age as I'd planned. I am grateful to the doctors, other professionals and my ex-colleagues, who have been open-minded enough to take EHS seriously and who have had the courage to speak its message. It is thanks to them that I can move forward with greater security and hope.”

France : 5G: The Masquerade of the ANSES Public Consultation Challenged at the Administrative Court

5G: the masquerade of the ANSES public consultation challenged at the Administrative Court
Equipe Phonegate 17 Aug. 2022

On Saturday, August 12, 2022, the associations Phonegate Alert, Robin des toits and ECERI challenged, before the competent administrative court, the modalities of the public consultation as well as the opinion and the report of ANSES (French Agency for Food, Environmental and Occupational Health & Safety) on 5G.

After the response of ANSES on July 6, 2022 to our informal appeal sent last April 13 to the Agency, the latter has explicitly refused to grant our requests.

We have therefore entrusted Maître Lisa Arazi, lawyer at the Paris bar, to represent us in this joint action against ANSES.

14 contributions classified as “outside the consultation process”
We therefore request, on the one hand, that ANSES publish, respond to and take into account the comments formulated in the framework of the public consultation as it did for some of them, and on the other hand, integrate them, if necessary, into the said report and opinion consolidated on February 17, 2022.

Dr. Joel Moscowitz, University of California Berkeley, has been circulating abstracts of newly-published scientific papers on radio frequency and other non-ionizing electromagnetic fields (EMF) about once a month since 2016. Several hundred EMF scientists around the world receive these updates. The complete collection of these papers contains more than 1,600 abstracts and links to more than 1,800 papers.

To see abstracts for the most recent papers or to download the 1,334-page document (pdf) go to: https://bit.ly/saferemr0822
Recent Research on Wireless Radiation and Electromagnetic Fields
Evidence for a health risk by RF on humans living around mobile phone base stations
Read more »
Publié par MerisRM à l'adresse 6:46 PM No comments: 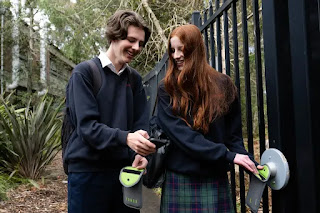 A Sydney high school has seen a dramatic decrease in behavioural issues and a boost in physical activity and students talking to each other just two months after it tightened restrictions on mobile phone usage.

(Photo): Davidson High School year 10 students Daniel Kenny and Annika Hore with the pouches used by the school to limit phone usage during school hours. CREDIT:JANIE BARRETT
Davidson High School principal David Rule said there had been significant changes since students in years 7 to 10 were banned from using mobile phones at school.

“Classrooms have effectively become phone-free and this has allowed staff to focus on educating students,” he said in a school newsletter. “Finally, in eight weeks of the policy, there has been a 90 per cent reduction in behavioural issues related to phones in the school.”
Read more »
Publié par MerisRM à l'adresse 4:31 PM No comments:

Trends in Brain Tumor Incidence Outside the U.S.
Use of mobile phones and progression of glioma incidence in four Nordic countries since 1979
Electromagnetic Radiation Safety, 2 August 2022

My [Dr. Joel Moscowitz] notes: Although the title of the following report from the WHO International Agency for Research on Cancer is in German, the report is available in English.

The report's summary, "no indications of a detectable effect of mobile phones have been found," seems misleading because it is inconsistent with the report's final conclusion, namely, "An increased risk in the 10% heaviest mobile phone users was an exception to this general situation, as it remained plausible."

"This ecological data is not sufficient to dismiss every potential mobile phone related risk scenario, but suggests that the risk – if it exists - would be very small, only occur after very long latency periods of several decades, or only affect small subgroups within glioma patients."
Read more »
Publié par MerisRM à l'adresse 11:42 AM No comments: