Gwyneth Paltrow warns of dangers of 'toxic' mobile phones and drinking tap water in latest Goop post... but experts say she is scaremongering
by Bianca London for Mailonline, 29 January 2016

- This week, the 43-year-old A-lister has shared some invaluable advice
- She writes about brain cancer and 'electro-sensitivity'
- Also makes a case for being cautious about drinking tap water

Whether she's claiming that water has feelings or sharing her favourite healthy recipes, Gwyneth Paltrow uses her weekly Goop blog to share her innermost thoughts and prized tips for a better life.

This week, the 43-year-old A-lister has shared some invaluable advice with her readers on the dangers of mobile phones and tap water.

Writing on her blog, the mother-of-two has shared a post entitled: 'Are Cell Phones and WiFi Signals Toxic?', in which she says it's almost impossible to remember a time without smartphones.

She then goes on to claim that this makes it equally easy to forget that the technology is still relatively new, with safety requirements that, for the most part, are generally untested.

She writes: 'The scientific community’s rumblings about brain cancer and the new-to-us affliction “electro-sensitivity” are worth exploring, at the very least, so we tapped three experts in the field.'
Read more »
Publié par Meris à l'adresse 8:34 PM 1 comment:

The full text of this study is now available online :
Click here. 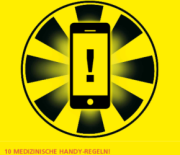 Fixed telephone should be used for longer phone calls at home and at work while mobile phone should only be used for urgent and short calls. The number of apps on the phones should be kept to a minimum because the mobile applications leads to higher continuous background radiation from mobiles even when they are not actively used for calls or internet access. The cell phone should also never be stored on, just around the body, for example in a trouser pocket.

Symposium "For the Recognition of Electrosensitivity": National Assembly, Paris, 11 February 2016

With the support of Mrs. Gro Harlem Brundtland, former
Director-General of WHO

With the current deployment of the Linky smart meter, testing of 5G for mobile telephony and more and more Wi-Fi in public places, we are more than ever surrounded by a "sea of waves". At the same time, a court recognized a handicap of 80% of a woman suffering from electohypersensitivity.
This is why it seems to crucial to us to place this major public health issue on the table and in particular to address this issue to physicians and health professionals. 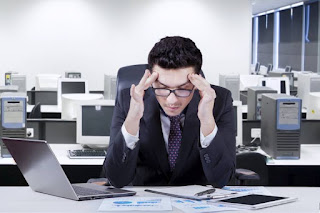 Electromagnetic fields (EMFs) can harm or heal depending on their frequency, power and length of exposure, say Russian doctors who use them daily in their hospitals since the 1970s. An Ontario woman who suffered for years before discovering a bioresonance therapist in Montreal testifies to this.

Hypersensitive to the environment, Linda Nolan was seriously ill for more than two decades. A professional interior designer since 1975, the Ottawa resident suffered from Lyme disease, a severe inflammatory infection caused by bacteria transmitted by certain ticks that can carry more than one disease (referred to as co-infections). This disease seriously compromises the immune system, a condition which opens the door to many other infections. Linda constantly experienced severe joint and muscle pain and heart palpitations and had difficulty walking or even going about her daily activities. She had to adopt a strict Paleolithic diet (rich in protein and low in carbohydrates) and followed a host of other treatments, especially prescribed and administered by Dr Jennifer Armstrong, an Ottawa-based environmental physician. ‘’Dr. Armstrong is a lifeline for lyme patients and was very helpful, especially with accessing the right labs to diagnose the infections. Blood tests were even sent to the Mayo Clinic and Infectolab in Germany. My problem was that I could not tolerate the antibiotics required to fight my infections. I would take one antibiotic to beat down the lyme and another infection would try to take over. », she says.
Read more »
Publié par Meris à l'adresse 9:57 AM No comments: 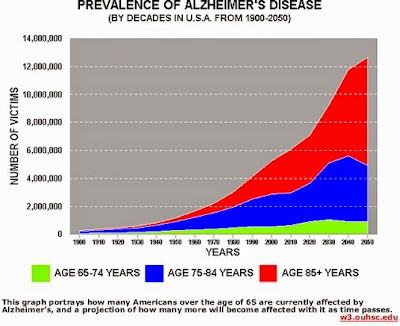 "Perhaps because influences like electromagnetic radiation and toxic chemicals in the environment cannot be seen or perceived, there was always certain reluctance by mainstream medicine to recognize potential health risks associated with these factors."

[Also refer to the clinical research of Prof. Dominique Belpomme, for example, his interview with Radio Canada in June 2014.]

“There is a strong evidence that EMFs and radio/microwave frequencies are associated with accelerated aging (enhanced cell death and cancer) and moods, depression, suicide, anger, rage and violence, primarily through alteration of cellular calcium ions and the melatonin/serotonin balance.”

In the Modern World, when each household in the developed countries possesses multiple electronic devices, like cellular phones, personal computers, and other numerous electronic gadgets, the general public seems to be concerned about the potential health risks of long-term electromagnetic radiation exposure on the human health and well-being.

In 1995, for the first time, the public attention was drawn to the possible link between electromagnetic radiation and risks of Alzheimer's disease development, following a landmark publication in the American Journal of Epidemiology by researchers from the University of Southern California School of Medicine. After thorough investigation, the researchers confirmed a direct substantial causal relationship between occupations, exposing individuals to higher levels of electromagnetic radiation, and the risk of developing Alzheimer's disease. 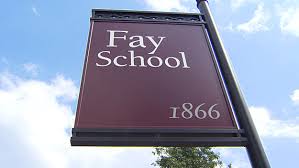 S0UTHBORO - A lawsuit accusing the Fay School of failing to accommodate a student's alleged Wi-Fi sensitivity is headed to trial in August, according to court documents.

The family of “G,” a 12-year-old who attended the Southboro junior boarding school, says the boy suffers from a condition called Electromagnetic Hypersensitivity Syndrome, which makes him feel ill when exposed to wireless Internet signals. They argue in their complaint, which they filed in August, that the Fay School ignored their pleas to find accommodations for G, who was experiencing dizziness, headaches and other symptoms in class because of the school’s Wi-Fi.

After a scheduling conference was held Wednesday in U.S. District Court in Worcester, the case is set to go to trial on Aug. 8 before District Judge Timothy S. Hillman, according to court records. The plaintiffs are seeking $250,000.
Read more »
Publié par Meris à l'adresse 6:27 PM No comments: 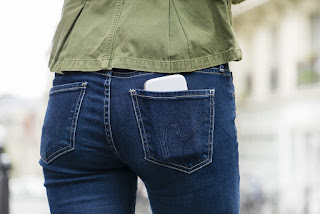 A noted scientist and women's health advocate has a stern warning about cell phones (smart phones): carrying them in your pocket or bra can cause cancer, tumors, and other debilitating conditions, according to a Sun report.

Dr. Devra Lee Davis, Ph.D., MPH, is the founder and president of Wyoming-based nonprofit, Environmental Health Trust. The organization specializes in providing "basic research and education about environmental health hazards and promote constructive policies locally, nationally and internationally," according to its website.

Davis, a leading voice in oncology and epidemiology, spoke at the National Institute of Environmental Health Sciences. There, she reiterated a long-standing warning that studies support her belief that cell phone radiation has a role in some cancer causes and chronic ill-health.
"The pattern of putting cell phones in the bra, and now there's a new device where you can actually have the phone strapped to your head, made me concerned about what we know about exposure to phones." 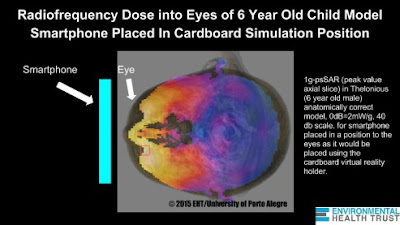 Teton Village, WY -- (SBWIRE) -- 01/11/2016 -- Environmental Health Trust (EHT) scientists are calling on Google to stop the spread into schools of wireless virtual reality system Global Expeditions Pioneer Program where middle-school children hold a cell phone encased in a cardboard box in front of their eyes to take virtual expeditions to Mars, the moon, and other special places.

"Two-way microwave radiation transceivers, in the form of Smartphones, should not be used directly in front of children's eyes and brains," cautions University of Utah Distinguished Prof. Om Gandhi, who is one of the original developers of testing to evaluate wireless radiation from cellphones and is a Senior Advisor to EHT.

Prof. Gandhi added, "We have never tested microwave radiating devices directly in front of the young developing eye. The absence of proof of harm at this point does not mean that we have evidence of safety."

"We want to know why is Google encouraging young children to employ a technology that has never been tested for their use when Samsung has a similar system that explicitly advises that no child under the age of 13 should be using it," asks Devra Davis, President of EHT, and Visiting Professor of Ondokuz Mayis University Medical School and The Hebrew University Hadassah Medical Center. 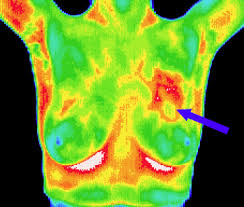 Part of my mission in helping you to understand all you can and must do to most effectively prevent and treat cancer is emphasizing early detection. Simply put, the earlier cancer is detected, the better the odds are for a full and long-lasting recovery.

Today, I want to talk about one of the most effective ways women can detect breast cancer, as well as other types of cancer, early and safely using thermography. As I mentioned last time, thermography is a safe and effective alternative to mammograms. Today I will explain why this is so and why you absolutely must know about thermography in your fight to protect yourself from cancer.

Waves, this treacherous enemy
by Gregory Balmat, lacote.ch, 30 September 2015 (translation from French by the Editor of "Towards Better Health")

Inquiry:  Electrohypersensitivity can make life nearly impossible.  The phenomenon is given far too little recognition in Switzerland.

Migraine headaches, skin burns, joint pains, sharp stinging sensations, this is just a small sample of the physical suffering experienced daily by electrohypersensitive persons when they are exposed to electromagnetic fields or electrosmog.


Ills that are sufficiently painful to completely upset living.  The status of this disorder remains unclear in many countries, including Switzerland.

In August, in France, the disability of a woman was recognized by the Incapacity Dispute Court of Toulouse because of her electrohypersensitivity (EHS).  In evaluating her functional disability at 85%, the French court allowed her to receive an allowance as a handicapped adult, a first in the Hexagone which could set a judicial precedent and also radically transform the status of French electrohypersensitive persons.

Today I conducted one of the most disturbing radio interviews of my life as host of “The Real Deal”, with a British physicist and electronic warfare expert, Barrie Trower.

By the time he had finished his service in the military, Barrie had acquired a great deal of expertise in the microwave field and he extended his research to common electronic systems, including cell phones, iPods, computer games and microwave ovens.

He was appalled to discover that microwave radiation is ubiquitous and extremely hazardous, especially to pregnant women and young children. The risks are so great that the use of WiFi, which is enormously popular, can lead to permanent genetic damage to your children and your children’s children. Here is his personal warning in his own words: