In an article published on Thursday, June 17, 2021 in the renowned French newspaper Paris Match, Dr. Philippe Gorny devotes an interview to Dr. Marc Arazi about his book “Phonegate” published by Massot Editions. We have translated it into English. Do not hesitate to relay it widely around you!

Buy the book in French

“Santé publique France found that between 1990 and 2018: the incidence of brain cancers has increased fourfold”

SMARTPHONE WAVES WHAT YOU NEED TO KNOW

Paris Match. Why this book? 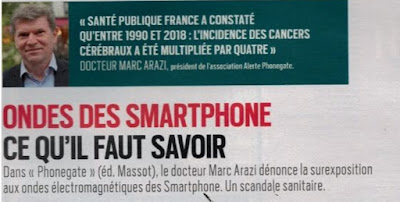 Dr. Marc Arazi. On July 8, 2016, a report by the French National Health Security Agency (ANSES) revealed, based on tests conducted on 95 phones by the National Frequency Agency (ANFR), that 90% of the devices emit electromagnetic radiation (EMR) that goes beyond authorized standards if used in contact with the body. In these conditions, those of real life, exposure to EMR can exceed up to ten times the value indicated in the instructions for use. Until 2016, to remain within the standards, manufacturers were testing smartphones at a distance of 1.5 to 2.5 centimeters from the skin, becoming the perpetrators of a widespread deception. I then asked ANFR to send me the detailed test reports. I was able to obtain them at the cost of a difficult legal battle. Obviously, ANFR has knowingly kept secret since 2012 a defect dangerous for the population, allowing manufacturers to avoid legal action led by millions of users.

What are the current standards?

What is measured is the amount of electromagnetic energy received by the user. It is called SAR (Specific Absorption Rate) and expressed in watts per kilogram. The standard in Europe ( EC) is 2 W/kg for the head and trunk, 4 W/kg for the limbs. In the United States, the SAR is 1.6 W/kg (the duration of exposure tested is thirty minutes against six in Europe): the impact of waves on tissue is evaluated for 1 gram against 10 grams in Europe, a quantity that concentrates the effect less and attenuates it. In all, the EC standards protect three times less than the American standards. At the request of ANFR, manufacturers now test devices at a minimum distance of 0.5 centimeter. This is better, but they are still not measured in contact with the body, despite the recommendations of ANSES in late 2019. This has still allowed, since April 2018, to withdraw from the market or revise 28 models with non-compliant SARs, a measure that should apply to all devices acquired before June 2017 because they overexpose users to EMR and are dangerous.

You mean for health?

Yes, EMR can affect fertility, but above all can promote the occurrence of cancers. The analysis by Swiss experts (universities of Bern and Basel) of 59 studies on this subject showed that those which do not find any harm from waves are sponsored by manufacturers. An American study by the National Toxicology Program found that exposure to 2G EMR induced malignant tumors of the heart, brain and adrenals in rats. Swedish professor Lennart Hardell has shown an increased risk of brain cancer in humans, leading WHO and the International Agency for Research on Cancer (IARC) to classify EMR in group 2B (possible carcinogen). Santé publique France has noted that between 1990 and 2018, a period in which the use of cell phones has been increasing, the incidence of brain cancers, including glioblastoma, the worst of all, has been multiplied by four!

How to protect yourself?

Distance from the device is the key to eliminating the risk. The best way is to use a hands-free kit, if possible of the air tube type (because air slows down the waves). You should avoid keeping your phone in contact with your body, whether in a pants pocket or, even worse, in a bra, do not put it under your pillow, etc.

5G is coming. What do you think?

It’s not reassuring! To the four or five antennas (2G, 3G, 4G, Wi-Fi) included in today’s devices will be added the 5G system, which is different and for which serious safety standards have yet to be established. 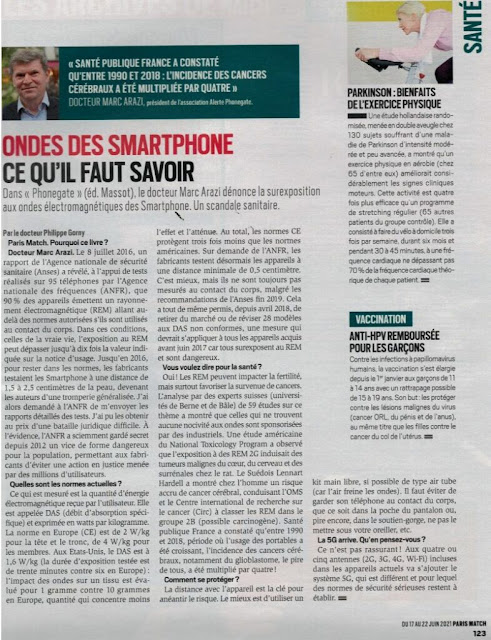