The Debate Over 5G in Switzerland

We apologize for the incorrect link to the video.  Here is the correct link:
https://www.euronews.com/2020/09/11/unreported-europe-5g-fears-and-unanswered-questions
The debate over 5G in Switzerland
By Monica Pinna, euronews.com • last updated: 12 September 2020 (with 8-min. video) :
The prospect of adverse effects of wireless radiation on the human body has sparked fears about 5G technology in Switzerland.

The country is at the forefront of the 5G rollout in Europe, installing over 2,000 antennas last year alone.

However, the speed of the implementation is slowing down over some people's concerns that the technology might be harming them.

In Nyon, on the banks of Lake Geneva, local resident Anna Frusciante, who is electro-hypersensitive, pointed out to Euronews the number of new antennas.

According to the WHO, those who claim to suffer from electro-hypersensitivity report a variety of health problems, which they relate to being exposed to electromagnetic frequencies, such as mobile phone signals. While some report mild symptoms like rashes and skin irritation, others are so severely affected that they change their entire lifestyle.
Read more »
Publié par MerisRM à l'adresse 6:48 PM No comments:

(CN) — A federal judge on Thursday ruled in favor of a wireless communication trade group five years after they claimed the city of Berkeley’s law that required retailers to warn customers about cellphone radiation violated their First Amendment rights.

The judge concluded that the city’s ordinance is preempted by the Federal Communications Commission’s regulatory actions on radio frequency emissions.

U.S. District Judge Edward Chen wrote in an 18-page order “the FCC could properly conclude that the Berkeley ordinance — as worded — overwarns and stands as an obstacle to the accomplishment of balancing federal objectives by the FCC.”
Read more »
Publié par MerisRM à l'adresse 12:06 PM No comments:

BERLIN (AFP) — Radiation from mobile phones could have contributed to the dramatic decline in insect populations seen in much of Europe in recent years, a German study showed Thursday. 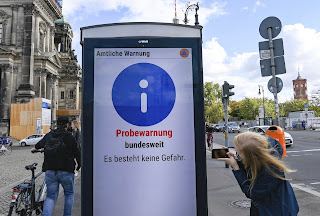 (Photo): “Trial warning nationwide. There is no danger” is written at the first nationwide warning day on an information board in Berlin, Germany, last week. (Jens Kalaene/dpa via AP) - [refers to nationwide testing of warning and alarm systems.]
On top of pesticides and habitat loss, increased exposure to electromagnetic radiation is “probably having a negative impact on the insect world,” according to the study presented in Stuttgart, which is yet to be peer reviewed.

The analysis of 190 scientific studies was carried out by Germany’s Nature and Biodiversity Conservation Union (NABU) together with two NGOs, one from Germany and one from Luxembourg.

Of the 83 studies deemed scientifically relevant, 72 showed that radiation had a negative effect on bees, wasps and flies.
Read more »
Publié par MerisRM à l'adresse 11:38 AM No comments:

At the end of this article, you will find many links to studies on the subject.

IN BRIEF
The Facts: Unnatural sources of electromagnetic seem to be harming not only us, but our bees, trees and other insects.
Reflect On:  How is so much of this technology able to rollout without appropriate safety testing? Why do many countries already have bans and restrictions in places like schools and nursing homes? 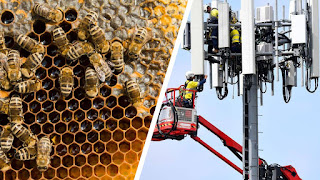 Multiple studies have shown that unnatural sources of electromagnetic radiation “biological effects. period. This is no longer a subject for debate when you look at PubMed and the peer-reviewed literature. These effects are seen in all life forms; plants, animals, insects, microbes. In humans, we have clear evidence of cancer now, there is no question. We have evidence of DNA damage, cardiomyopathy, which is the precursor of congestive heart failure, neuropsychiatric effects…” – Dr. Sharon Goldberg, an internal medicine physician.
Read more »
Publié par MerisRM à l'adresse 12:27 PM No comments:

France: A damning poll for 5G: two out of three French people are "Amish" ...

A damning poll for 5G: two out of three French people are "Amish" ...
by Lionel Laparade, ladepeche.fr, 15 September 2020 - translation
'An OpinionWay poll carried out on August 26 and 27 reveals the very strong rejection of 5G technology in France. This Tuesday morning, Emmanuel Macron compared the opponents of this new technology to the "Amish" '
While nearly 70 mayors co-signed a forum this Sunday in which they demand a moratorium on 5G in France, an OpinionWay survey carried out on August 26 and 27 on behalf of the law firm MySmartCab reveals that 65% of French people are also in favor of the immediate suspension of the deployment of the fifth generation of mobile telephony standards.
85% of those consulted and opposed to 5G, for example, prefer fiber which, according to them, should rather cover the entire territory. 76% that the speed obtained with 4G is sufficient, but above all, 82% of respondents consider that all the health studies required must be carried out impartially before the arrival of the new technology in France.
4 collective actions launched against 5G
Read more »
Publié par MerisRM à l'adresse 1:04 PM No comments: 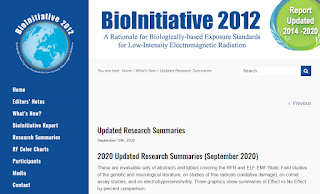 These are invaluable sets of abstracts and tables covering the RFR and ELF-EMF/Static Field studies of the genetic and neurological literature, on studies of free radicals (oxidative damage), on comet assay studies, and on electrohypersensitivitity. Three graphics show summaries of Effect vs No Effect by percent comparison.

The trend continues that the great majority of studies report biological effects of low-intensity exposures to both ELF-EMF/Static Field and RFR.

Clearly the trend continues that the great majority of studies report effects of low-intensity exposures to both ELF-EMF and RFR, and a small percentage of published studies report that no effects are seen.

France: Phonegate: 25 cell phone models updated or withdrawn from the market since 2018

Excerpt from "Time to Wake Up to the Global Public Health and Industrial Scandal of Phonegate" with summary of legal actions filed in France against Xiaomi and HMD GLOBAL OY (Nokia).
by Meris Michaels, 4 September 2020 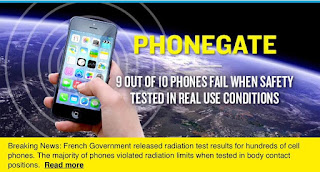 In July 2016, a scientific report was published by the French National Agency for Food, Environmental and Occupational Health and Safety (ANSES), entitled, “Exposure to Radiofrequencies and Child Health”. The ANSES Report highlighted the results of the French National Frequencies Agency (ANFR) 2015 measurement tests of 95 mobile phones tested in body contact positions – meaning, with no separation distance. ANSES announced that 9 out of 10 mobile phones tested in contact with the skin exceeded the regulatory threshold of 2 W/kg, some of them more than three times.
Read more »
Publié par MerisRM à l'adresse 7:20 PM No comments:

For Eric Piolle, the mayor of the Alpine city and a rising star in the country’s Green party, making sure these companies have access to 5G communication networks is not a priority.

“We shouldn’t just jump on a new technology for the sake of it,” Piolle told Bloomberg in an interview. “We need to pause, and look into the impact 5G will have on the environment.”
Read more »
Publié par MerisRM à l'adresse 6:56 PM No comments:

Updates:
- Section, "25 cell phone models updated or withdrawn from the market" and table, "List and details of measurements conducted on mobile phones with non-compliant SAR" under part 1.
- Lawsuit against Apple
- Lawsuit against the U.S. Federal Communications Commission
- Phonegate action in Switzerland
- Launch of Phonegate Alert's first awareness campaign on the dangers of cell phones
Time to Wake Up to the Global Public Health and Industrial Scandal of Phonegate
by Meris Michaels - Revised 2 September 2020

For over 20 years, cell phone users have been knowingly misled about their true levels of exposure to radiofrequency radiation RFR) under real conditions of use in contact with the body. Consumers have been doubly misled by not having been informed by the public authorities to keep the phone away from the body.

This issue concerns all of us and those we love. Most of us have cell phones. We hold them against our heads, keep them switched on in a pants or shirt pocket or tucked in a bra. Many of us are unaware that cell phone manufacturers are testing phones at a certain distance from the body, not in the ways that most of us use them, touching the body. These same manufacturers warn us to keep the phone at a distance from the body.

The authorities have been lax in implementing public health campaigns and recommendations to reduce RFR exposure, especially regarding children, pregnant women and medically sensitive populations who are more vulnerable to this radiation.